Allen Abel travels to Sumter, S.C., a place of history and infamy, for the eclipse. 'Praise Jesus,' some bellowed at totality, and a father cried. 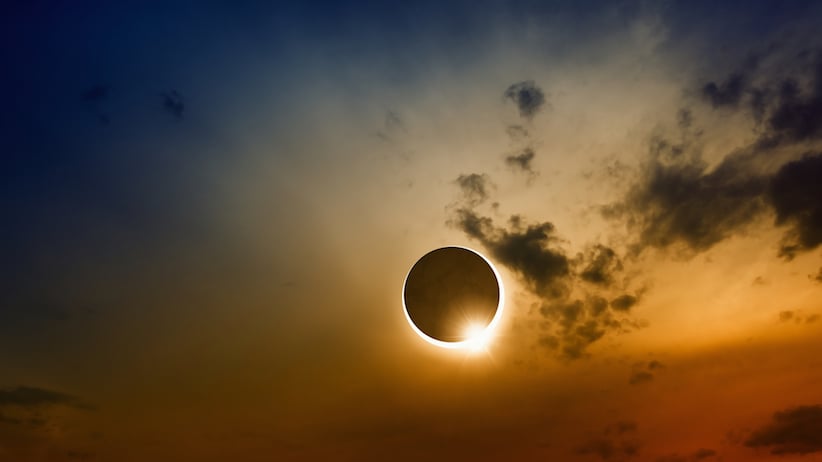 “Hello darkness, my old friend,” she was singing in the back seat as we rolled out of Sumter down Route 120, chasing a shadow and a prayer. Above us, on a 35-degree South Carolina day, a shrinking disc played hide and seek with mocking clouds as thick and dark as devil’s food. We squinted through our Smithsonian goggles at the lemon-peel sun and got back in the car and drove on.

Outside the railway depot at a crossroads called Pinewood, a dozen people had stopped their trucks and climbed down into the inferno. But there was no train for them to catch here; the last Low Country flyer called at Pinewood more than 60 years ago.

More than those same 60 years ago, a Brooklyn boy already was headstrong for the stars, hauling his two-inch refractor onto Flatbush Avenue and offering passers-by a shaky glimpse of the rings of Saturn and the yet-untrammeled craters of the moon for a Jefferson nickel. Now, he and his daughter, 12, and the girl’s Sovietsky grandfather were travelling together, as close as the moon and the sun.

Sumter, S.C., a sizable town, already bulged on Eclipse Day morning with dozens of pinkish Northerners in Red Sox caps and T-shirts that said “Occupy Totality.” Sumter, indeed, was within the narrow cone of occultation that arced, at the last of its swift journey across the continent, from the state capital at Columbia, across Lake Marion, toward haunted Charleston and the sea.

The place had been named for an 18th-century military man who brought a powwow of Cherokees to London to meet George III, then turned his coat and led his colony’s revolutionary swampers to victory against the selfsame king. Later, in the final week of the War Against Northern Aggression, as it still is called here, the African-American troops of the 54th Massachusetts occupied—and helped to sack—the town that took his name. The Ku Klux Klan was formed a couple of counties away, and Dylann Roof, the Charleston race murderer, grew up just down the road. So there was history here and infamy as well, as clouded as the sky as the hour crept closer.

“Who will work the fields to produce the food necessary to all?” wailed the local newspaper in April 1865 as plantation slaves breathed finally free. Now, the sun briefly would abandon the descendants of both overseers and chattels, as well as the marble column in the Sumter city park that read TO OUR CONFEDERATE DEAD, shadowing equally all factions of a country still rent in twain.

“Where y’all from?” asked a man named Todd, owner of the Cut Rate Drug Store on Main Street, established 1935, the oldest restaurant extant in the Palmetto State.

“We had someone here from Denmark, too,” said Todd. “I better start taking pictures of everybody who comes here today.” And so he did.

About five miles south of the Confederate memorial and the statue of Sumter and the “world famous chicken salad” at the Cut Rate Drug Store, the contingent pulled into the parking lot of a Family Dollar discount store and stared in expectation at the now-half-covered Sol.

“I saw already in Moscow three years ago,” shrugged Grandfather, and he went into Family Dollar to price some half-price lawn chairs. Meanwhile, the South Carolina Emergency Management Division was warning tourists to beware of the sharp-clawed Lizardman, this state’s scaly Ogopogo, lest he use the midday darkness to commit his fiendish murders then abscond again into the fetid swamps.

“SCEMD does not know if Lizardmen become more active during a solar eclipse, but we advise residents of Lee and Sumter counties to remain ever vigilant,” the agency, ever-ready, prudently announced.

“Are we really going to see Lizardman?” asked the daughter, but the White House being left behind for this vacation, the father had no fear of sighting him in South Carolina.

From overcast Sumter, Route 120 pointed south toward what seemed to be open sky. At Pinewood Depot, then, we would make our stand. At best, there would fall here 120 seconds of extraterrestrial darkness, and the million-degree corona suddenly would sear the haloed sky.

At worst, we could say that we had driven 12 hours to curse our awful luck. So we stopped the car at Pinewood and looked up.

Now, as the last pinky-nail sliver of sun was dying, silent fervent yearnings urged the last dark cloud away. The village’s few street lamps came on; pigeons flew toward their roosts in the old depot.

“Praise Jesus!” a group of women suddenly began bellowing as the corona—shimmering through the father’s tears, the girl going, “Oh my God oh my God this is SO cool!”—appeared in the clear, ultraviolet sky.

Imagine 60-and-more years of dreaming, pictures in books, suddenly made real, living long enough to see this for the first time, and with a little girl.

“Only Jesus could do this!” the women hollered. “Praise the Lord!” And there was cheering from across the tracks at Pinewood, and laughter from the lawn chairs, and to write this brings the crying on again.