What can Canada do for Venezuela? 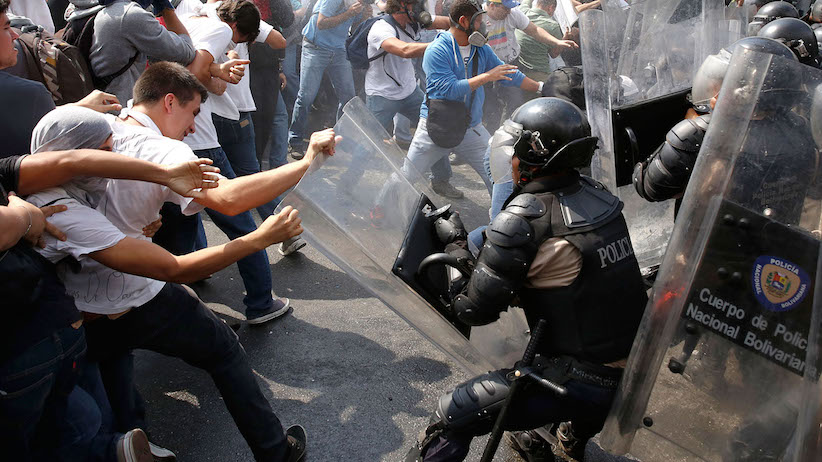 Ben Rowswell was Canada’s ambassador to Venezuela from 2014 until last month, when he retired from the Canadian foreign service. He’s now working in Toronto as co-founder of Udara, a software venture that provides an app designed to help activist groups connect with supporters through their mobile devices.

Maclean’s asked Rowswell to answer questions about Venezuala that might help Canadians who have seen images of protests from the streets of Caracas, and heard that the oil-rich country’s economy has collapsed, but might not have absorbed much beyond those broad points.

Q: Let’s start with Venezuelan President Nicolas Maduro. How would you describe him, based on your three years in Caracas?

A: President Maduro is in a political tradition which places great emphasis on populism. He personally is not a figure in a cult of personality like a lot of populist rulers are. The focus of the populism is the party that he runs, which is the United Socialist Party of Venezuela.

A: Yes, he’s definitely got a left-wing ideology. But I believe that populism has less to do with left or right than the tactics by which you gain power and remain in power. In the case of populists in general, and Maduro in particular, you cling to power at all costs, no matter what damage it does to your country or political system or, in his case, its economy.

Q: On that matter of destroying institutions, can you explain the “constituent assembly” he has created?

Q: Does that mean that the National Assembly, the opposition-controlled legitimate legislative body, is basically out of business?

A: That’s right. [Maduro] hasn’t conducted a traditional coup d’etat, with tanks surrounding the parliament. But the effect is more or less the same. The vast majority of Venezuelans who participated in the 2015 parliamentary elections no longer have representatives. Those representatives are not allowed to meet in the legislature, they’re not allowed to pass laws, and anything they pass is immediately overruled by the Supreme Court.

Q: What about the protest movement we see manifested in images of from the streets of Caracas and elsewhere in the country? Does it seriously threaten Maduro’s control?

A: It is quite powerful. I would characterize the protest movement that has risen up against the centralization of power under President Maduro as broader than the formal political opposition to him. They certainly play an important role, but the protest movement is broader and larger, and I would say somewhat more radical.

A: The protests began really at the instigation of the population at large, and not necessarily because any political parties called for the people to come to the streets. There was just widespread anger and rejection of the president’s attempt in March this year to eliminate the National Assembly. The political parties do have relatively coherent decision-making mechanisms, and they are able to show some leadership, but the crowds don’t belong to them.

Q: How is Maduro responding to all this?

A: He has shown no hesitation to throw political party leaders in jail, to violate parliamentary immunity. There are upwards of a thousand political prisoners right now. But because this is not primarily an opposition political party movement, taking the political party out of the picture doesn’t stop the protests.

They have been extraordinarily long-lasting. If you think of major street protest movements in any country—from Ukraine, to the Arab Spring, to the umbrella movement in Hong Kong—it’s extremely rare that they last more than two, maybe three months. We’re now into month five in Venezuela, and about to get into month six, and they’re not going anywhere. The president and the governments have had to respond with increasing degrees of repression as the crowds refuse to leave the streets.

Q: What should countries like Canada do to support Venezuelans who want their democracy back?

A: Speaking out is important because Venezuelan citizens themselves have less and less ability to do so. Canada is at the forefront of the countries that are expressing publicly their disagreement with violations of popular sovereignty. The second thing the international community can do is to try and shape incentives for people to come to the negotiating table, on both sides, both the government and the opposition.

Something that Canada has been doing has been to support international experts who can generate advice, drawn from other countries—whether it’s the Colombian peace process, or the transition from dictatorship to democracy in Tunisia, or how to run a transition, or how to run a peace and reconciliation process—and feed those ideas into the debate. It’s so people at the negotiating table in Venezuela have a wider set of options to consider, which might seem less of a winner-take-all kind of negotiation.

RELATED: Venezuela collapses and nobody cares

Q: What about economic sanctions?

A: I do think there’s a case for individual sanctions against human-rights abusers. But sanctions can also go too far. Broad-based economic sanctions that punish everyday people of a country probably lose their incentive nature, if it’s just to punish bad actors rather than to usher them in the direction of peace and reconciliation.

Q: And the context is the horrific downward economic spiral Venezuela has suffered. In your three years there, that must have been alarming to witness.

A: It was pretty bad in 2014 when I arrived. It’s gotten way, way worse. The economic decline of Venezuela predates the fall of oil. The economy had begun to decline quite significantly in 2012; it was 2015 really when the reduction in the oil prices really started to hit Venezuela.

There was virtually no domestic production capacity left. The cost of virtually everything was cheaper to import than to produce domestically. And so when they lost the revenue from oil, they could no longer afford imports. That’s when you saw massive shortages of food and medicine—virtually everything.

Q: It’s hard to imagine what that means on a day-to-day basis.

A: One really dramatic study came out last year to confirm what those of us living in Venezuela had seen: that 73 per cent of our population had experienced what you could very euphemistically call involuntary weight loss. Of those people, the average weight loss was 19 pounds. We saw people were getting thinner and thinner and thinner. And this in the country that was the richest in Latin America for most of the 20th century.

Q: We haven’t even mentioned Hugo Chavez, the president who came before Maduro. By the time Chavez died in 2013, the year before you arrived in Caracas, he had turned the country’s economy into a disaster.

At the outset, both Chavez and Maduro, in his first election, genuinely won majority support. Canada should have no opinion on who gets elected, and I don’t think we have that much to say about which economic policy they favour. But when the vast majority of the population disagrees with the economic policies of the government, and wants to change that government and introduce any new economic policies, they should have the right to do so. And that’s the principle that Canada defends.

This interview was edited for clarity and condensed.