What caused the Ukrainian plane crash, and why Canada should investigate

Justin Trudeau confirmed intelligence that said Flight 752 was likely shot out of the sky. There's good case to be made that Canada should conduct the investigation into the disaster. 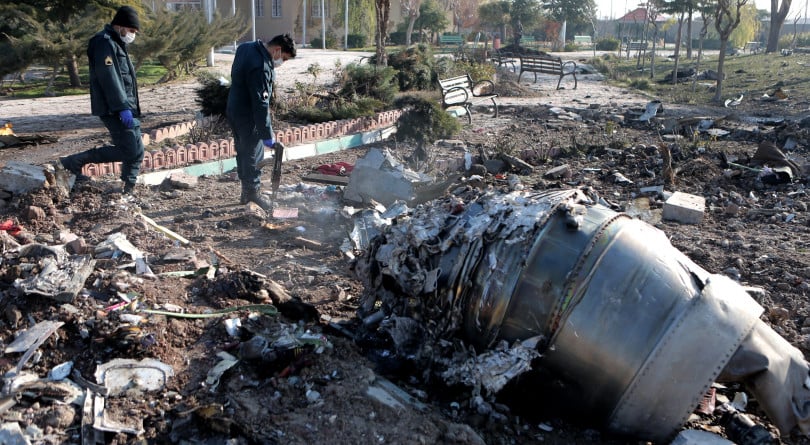 Aviation accident investigators don’t jump to conclusions. They may speculate wildly behind closed doors as they solve their airborne mysteries, but they do not typically shoot from the hip. Which is why after a Ukrainian International Airlines flight carrying 57* Canadians crashed in Iran, one response quoted all around the world was so remarkable.

Just hours after UIA Flight 752 went down, OPS Group—a network of pilots, dispatchers and air traffic controllers that promotes information sharing in plain language—offered a preliminary assessment. “We would recommend the starting assumption to be that this was a shootdown event,” read a blog post signed by founder Mark Zee, “until there is clear evidence to the contrary.”

Read a little more closely and Zee’s assessment has more to do with risk management than diagnosis. “Images seen by OPSGROUP … show obvious projectile holes in the fuselage and a wing section. Whether that projectile was an engine part, or a missile fragment is still conjecture,” he admits. Whatever the cause, OPS Group’s advice to airplane operators: don’t fly to Iran until the cause for Flight 752’s demise is determined.

By midday on Thursday, reports citing U.S. intelligence sources were corroborating Zee’s conjecture. In a mid-afternoon press conference, Prime Minister Justin Trudeau confirmed that intelligence reports pointed to a missile strike as a likely cause of Flight 752’s downing—and reinforced calls for a “thorough and credible” investigation.

Two days later, Iranian officials took responsibility for the downing of the plane. They called the missile strike accidental, prompted by the aircraft’s movements in the vicinity of a sensitive military base.

What do we know about Flight 752’s final minutes?

The aircraft wasn’t airborne more than a couple of minutes, according to a flight log published at FlightAware.com. The plane reached a speed of 513 km/h and climbed to an altitude of 2,240 metres above sea level (more than 7,300 feet). At that point, the data abruptly cuts out.

The day after the crash, CBS News and Reuters reported that U.S. intelligence officials were “confident” the airplane was mistakenly shot down by an Iranian missile. “U.S. intelligence picked up signals of a radar being turned on,” sources told CBS News. “U.S. satellites also detected two surface-to-air missile launches, which happened shortly before the plane exploded.”

Then came Iran’s admission of responsibility.

What the world now knows about how Flight 752 went down contradicts an initial report from the Iran Civil Aviation Organization, which published preliminary findings on the Flight PS 752 disaster less than 24 hours after the crash. That report blamed a “technical error,” and cited eyewitness reports that claimed the aircraft—which had lost radio contact—caught fire and appeared to turn to the right, back toward the airport, before it hit the ground.

Investigators did recover the flight data recorder and cockpit voice recorder from the wreckage, though initial analysis suggested some damage due to the fire and impact.

Who investigates the crash?

The short answer is Iranian officials will lead the investigation. The International Civil Aviation Organization (ICAO) has strict rules that govern accident investigations. They’re all laid out in Annex 13 to the Convention on International Civil Aviation. The Montreal-based ICAO has 193 members, including Iran, Ukraine and the U.S.—all of which have reportedly been invited to participate in the investigation. The New York Times reports, based on anonymous sources, that the U.S. will be represented by the National Transportation Safety Board.

Article 5 of Annex 13 determines who participates in any investigation. Iran’s civil aviation agency will run the show, because the crash happened within its territory. The rules say Ukraine also gets to appoint a representative, because the airplane was registered—and operated—in Ukraine. The U.S. would also get a representative, because the airplane was manufactured by Boeing, the U.S.-based aerospace giant. Iran’s preliminary report did indicate that Ukraine had sent a team to Iran, and the NTSB had been notified after the crash.

Canadians might be concerned that their country’s diplomatic freeze with Iran—the two nations haven’t had normal diplomatic relations since 2012—might stymie any Canadian attempts to learn anything about the fate of Flight 752. Indeed, Foreign Minister François-Philippe Champagne, in a rare phone call with his Iranian counterpart, “stressed the need for Canadian officials to be quickly granted access to Iran to provide consular services, help with identification of the deceased and take part in the investigation of the crash.” The Canadian Press reports that Iran did, in fact, invite Canada to participate.

What role could Canada play in the investigation?

Elaine Parker, an aviation safety expert with Beyond Risk Management and executive member of the Canadian Society of Air Safety Investigators (CSAI), struck an optimistic tone about the Iranian civil aviation authority’s sense of fair play.

“There is a well-established international network that looks past the politics and follows a very structured, very careful and methodical approach to the investigation,” says Parker. She was confident the Iranian investigator-in-charge—who is “basically God” in these situations—would accept help from any country that put its hand up. “He is expecting that offer, and they’re expecting it to be taken,” says Parker.

If that happens, Canada could become deeply involved on the technical side of the investigation. Transport Minister Marc Garneau told reporters at an Ottawa press conference the Transportation Safety Board of Canada (TSB) has “expertise” that would come in handy should investigators seek it out. “If it’s the desire of the Ukrainians and Iranians, Canada would assist with black box data interpretation,” he said.

Parker said Canada is “very well known” as a reliable partner in figuring out why planes fall out of the sky. “We have an incredible state-of-the-art cockpit voice recorder and flight data recorder readings capability in Ottawa,” says Parker. “We frequently participate in investigations.”

Barry Wiszniowski, the president of Aviation Safety Management Experts and CSAI’s vice-president, says Canada has a track record of taking over when two sides of a crash fear the other side’s bias could poison investigations. Wiszniowski pointed to a particularly thorny 2012 incident in which two American airplanes that collided in mid-air were piloted by employees of the NTSB and the Federal Aviation Administration. The “unique circumstances” of that event saw the two American agencies hand the reins to Canada’s TSB, which fully investigated the matter.

On Jan. 13, TSB chair Kathy Fox did confirm at a press conference that two of the agency’s officials were headed to Iran and had been granted access to the crash site by Iranian officials. Fox said the TSB was in “direct” contact with the Aircraft Accident Investigation Board shortly after Flight 752 went down.

Fox added that a second team of TSB investigators with expertise in flight data and cockpit voice recorders would seek to offer assistance, but she didn’t “fully know the scope” of the Canadian role. Fox did say Iranians will allow Canadian investigators to download and analyze data from those recorders.

Will there be more than one investigation into the Flight 752 disaster?

At her Jan. 13 press conference, Fox said the investigation led by Iran’s civil aviation authority still has many questions left to answer. The TSB wants to know, for example, why Iranian airspace wasn’t closed to commercial aircraft when Iran fired missiles into Iraq earlier that night, and why some operators continued to fly in nearby airspace even after the crash. But, Fox added, the ongoing investigation “doesn’t preclude” separate investigations conducted by other officials.

She said after Malaysia Airlines Flight 17—colloquially known as MH-17—was shot down over eastern Ukraine, the Dutch Civil Aviation Authority conducted a thorough investigation into the causes of that crash (and concluded definitively that a missile strike brought down that plane)—and the country separately pursued a criminal investigation. Fox didn’t comment any further on other prospective investigations into Flight 752, only saying those questions are for “others to determine.”