What Donald Trump doesn’t understand about the Pope 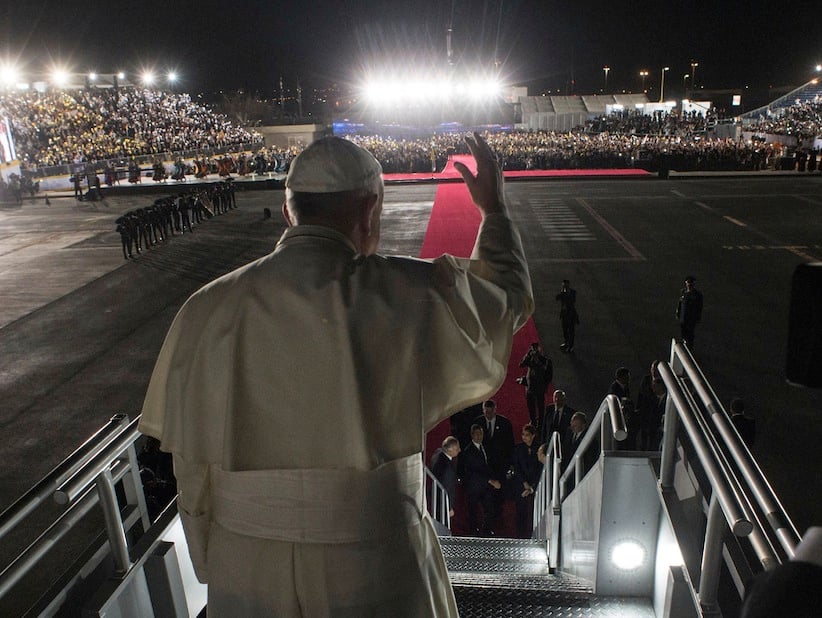 Pope Francis waves as he boards his flight to Rome during the farewell ceremony at Ciudad Juarez, Mexico. (L’Osservatore Romano/Pool Photo via AP)

Pope Francis pilloried politicians as princes of privilege on his six-day trip to Mexico, which ended with a Mass celebrated a stone’s throw away from the Rio Grande and included an impassioned plea for immigrants. The Pope, though, saved his strongest statements for the flight home and a non-Mexican politico: Donald Trump, blasting the billionaire’s proposed border wall—which Trump says he’ll build and make the Mexican government pay for. A “person who thinks only about building walls, wherever they may be, and not building bridges, is not Christian,” Pope Francis told reporters in a papal flight press conference.

Trump, who says he’s “proud to be a Christian,” shot back with his usual belligerence, portraying the Pope as more a pawn of Mexican interest. “They are using the Pope as a pawn and they should be ashamed of themselves for doing so, especially when so many lives are involved and when illegal immigration is so rampant,” Trump said conspiratorially of the Mexican government. “The Pope only heard one side of the story—he didn’t see the crime, the drug trafficking and the negative economic impact the current policies have on the United States. He doesn’t see how Mexican leadership is outsmarting President Obama and our leadership in every aspect of negotiation.”

If Trump had paid any attention to Mexico over the past five years he would have noticed emigration has crashed, with many Mexicans preferring to stay put instead of risking an increasingly fortified border and anti-immigrant initiatives in some U.S. states. Those trying their luck these days are largely Central Americans, who risk robbery and rape as they transit Mexico, and, more recently, increasing robust immigration enforcement before arriving at the U.S. border.

And had Trump paid attention to the Feb. 12-17 papal trip to Mexico, he would have heard the Pope excoriate Mexican elites and seen him head for peripheral places that an image-conscious Mexican government didn’t want him to go. Pope Francis asked indigenous populations in southern Chiapas state for forgiveness for the dispossession of their lands, demanded a better deal for poorly paid factory workers in Ciudad Juárez and told youth without options in Michoacán state—where outward migration was once rife and the drug trade has deep roots—to eschew the seemingly easy money of organized crime. “[Jesus] would never encourage you to be hitmen,” he told them at a soccer stadium in the city of Morelia. 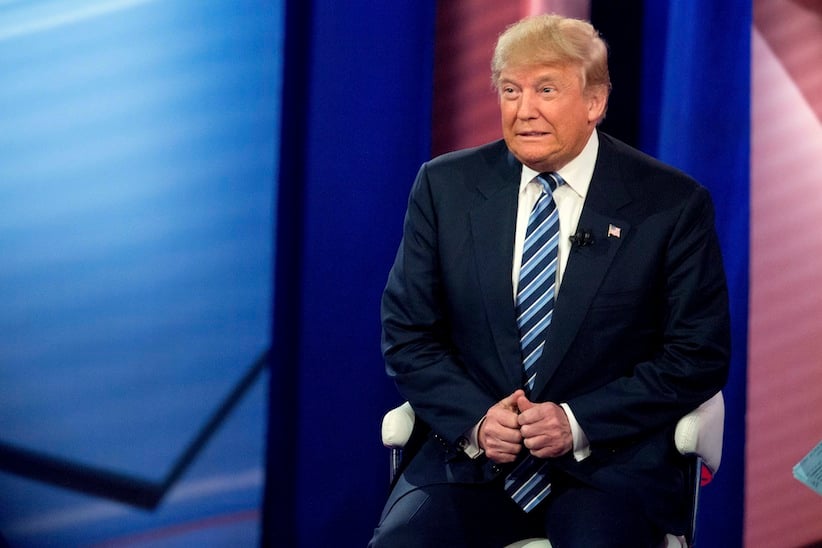 Republican presidential candidate Donald Trump reacts as he makes a joke about Pope Francis as he arrives for a CNN town hall at the University of South Carolina in Columbia, S.C., Thursday, Feb. 18, 2016. (AP Photo/Andrew Harnik)

Trump, for all his attacks on the Mexican government, has mostly badmouthed migrants. Still, he unites Mexicans like few figures can and causes understandable disquiet and disgust—to the point that Trump piñatas started selling shortly after his comments calling Mexican migrants “rapists” went viral.

He also spooks the Mexican elite like few others (save for the perpetual anti-system candidate Andrés Manuel López Obrador who, like Trump, is a populist who talks often of conspiracies against him.) President Enrique Peña Nieto even warned in his 2015 address to the UN General Assembly that populism “of the left and right” loomed as a threat, while “societies must be alert in the face of those taking advantage of their fears and preoccupations”—comments alluding to the likes of López Obrador, who leads early polls for the 2018 elections, and Trump.

Related: Inside the unprecedented rise of Donald Trump

One analyst says the rise of Trump represents a betrayal for many Mexican elites, who thought moving toward democracy and open markets with NAFTA would bring recognition and respect and an end to old stereotypes of underdevelopment. “The kind of automatic goodwill they thought a country like Mexico would get for these kind of changes from the U.S. have yet to materialize,” says Federico Estévez, political science professor at the Autonomous Technological Institute of Mexico. “Instead … what we’ve seen unveiled in U.S. politics is this really kind of ferocious nativist backlash against Mexicans.”

For all of Francis’s tough talk, Mexican politicians couldn’t snap enough selfies or appear in enough pictures taking communion or kissing his ring—once verboten in a country with a strict separation of church and state and where public officials wouldn’t previously appear publicly with priests. The Michoacán state government leveraged the visit to sponsor Twitter hashtags and tourism ads, while Ciudad Juárez sold journalists—an estimated 1,800 covering the Feb. 17 Mass at the border—on the narrative of redemption and urban renaissance in a city once considered the murder capital of the world.

Several priests say the politicians have tried to “legitimize” themselves or improve their images with the Pope’s visit. In an address to the political class, Francis warned them, “[Seeking] the path of privileges and benefits for the good of all, sooner or later the life of society becomes a fertile soil for corruption, drug trade, exclusion of different cultures, violence and also human trafficking, kidnapping and death, bringing suffering and slowing down development.”

Pope Francis blasted his own bishops, too, in Mexico City, telling them to start denouncing drug violence—an issue the Mexican church has only spoken timidly on and taken criticism for accepting narcolismosnas (drug alms). He left comments in a seminary guest book instructing future priests to avoid becoming “clerics of the state”–a rebuke of the perceived coziness between Mexican bishops and local politicians, and a call for more outspokenness.

Sociologist and church observer Rodolfo Soriano Nuñez sees a similar call to U.S. clergy in the Pope’s comments on Trump. “The risk of a Trump presidency is real,” Soriano says. “It was probably better for the Pope to come forward, and to make a principled declaration, instead of playing by the old Catholic rulebook of how to tame a wild politician.”