What happens to ISIS after the death of Baghdadi?

Adnan R. Khan: The nightmare scenario is a reunion with al Qaeda, which would vastly increase the group's capabilities 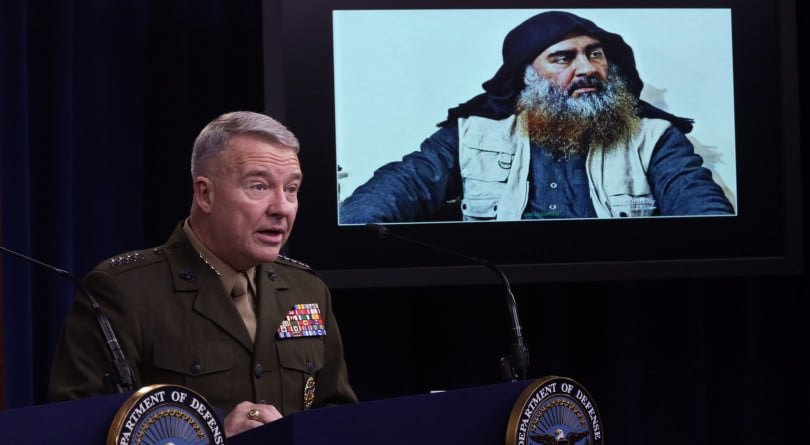 A U.S. Marine Corps general speaks as a picture of Baghdadi is seen during a press briefing on Oct. 30, 2019, at the Pentagon (Alex Wong/Getty Images)

When the walls closed in on the reclusive ISIS leader Abu Bakr al Baghdadi last Saturday night, and he ran into a tunnel under his hideout, it felt only fitting that he should meet his end below ground.

ISIS used similar tunnels in Mosul, Raqqah, Deir Ezzor—everywhere, in fact, where they once exerted control—to attack the forces arrayed against them. Tunnels were the scourge of the Iraqi army, which often found itself surrounded by ISIS snipers who used them to sneak behind enemy lines. Hundreds of Iraq’s most elite soldiers lost their lives this way.

For Baghdadi to die in a tunnel is poetic justice.

Still, for anyone who’s followed the ISIS saga closely, Baghdadi’s death doesn’t come with much closure, either. It’s justice, also, of a fleeting variety. The founder of ISIS is dead but ISIS lives on, all the experts tell us.

So what comes next?

If past deaths of foundational militant leaders are any guide, we should not expect a total collapse of ISIS, but we should also not expect it to remain unchanged. Founding leaders provide a centre of gravity. When they die, only a successor with equal prestige and charisma can keep the organization unified.

When Osama bin Laden was killed, al Qaeda didn’t fall apart; it cleaved off into functionally independent franchises. A similar process played out after the death of the Taliban’s Mullah Omar. The pattern suggests group fragmentation.

READ MORE: ISIS is dead. But it’s not gone.

In the case of ISIS, the new leader, Abu Ibrahim al-Hashemi al-Qurayshi, has little if any public recognition. It’s unlikely he will exert the kind of influence Baghdadi wielded. This was bound to be a problem for an organization that kept the identities of its inner circle secret.

In the absence of a prominent personality, what’s left is ideology. ISIS is considered the most extreme group in the jihadist universe but its basic ideology is only marginally different from al Qaeda’s, though that difference was important enough to precipitate a split between the two in 2014.

At the core of the disagreement is time: For al Qaeda, the path to an Islamic Caliphate will take years, even decades. Its goal for now is to reform Islam, to bring more people over to its belief system and maintain a tempo of military operations that keeps its enemies in a perpetual state of conflict. It’s a divide and conquer strategy premised on the hope that as Muslims become more marginalized, they will increasingly turn to al Qaeda.

ISIS upended that strategy when it broke away in 2014 and declared its own caliphate. Until then, the two had maintained their alliance, despite disagreements over tactics, particularly al Qaeda in Iraq’s–the ISIS predecessor—targeting of Shia Muslims.

With the ISIS caliphate in ruins, the ideological space between the two groups has narrowed. Signs of ISIS fighters returning to areas in Syria, where al Qaeda-affiliated groups still operate, have been emerging for months. In February, during a brief ceasefire in Baghouz village, where ISIS made its last stand, one solution proposed by ISIS to end the fighting was safe passage for its 300 or so fighters to Idlib, home to Hurras al Din, a group that has pledged allegiance to al Qaeda.

This week, a Kurdish intelligence officer, requesting anonymity because he is not authorized to speak to the media, told me Baghdadi had been hiding in Idlib for nearly four months and that other ISIS fighters are now “moving freely” in Idlib. “This would only be possible if there is some kind of agreement with the groups operating there,” he said.

A rapprochement between ISIS and al Qaeda is now a distinct possibility though it’s still unclear the degree to which the two would merge. One scenario is that disillusioned ISIS fighters will join al Qaeda, swelling its ranks. Another more ominous outcome would be a full, top-level merger, which would not only strengthen al Qaeda’s ability to draw in more recruits but also vastly increase its operational capabilities.

The nightmare scenario, terrorism experts say, is a world in which al Qaeda and ISIS affiliates, from the Middle East to Southeast Asia, start cooperating and sharing resources, including the tens of millions of dollars ISIS reportedly has squirreled away.

That may not happen, at least not immediately. There is still a lot of bad blood between the two groups after years of in-fighting. The dominant extremist group in Idlib, for instance, Hayat Tahrir al Sham, or HTS, has been trying to distance itself from al Qaeda and re-brand itself as a legitimate opposition to the Syrian regime. And it still harbours a deep hatred of ISIS.  Both HTS and Hurras al Din have both targeted ISIS sleeper cells in Idlib.

“HTS has worked hard to create the impression that they’re not an expansionist jihadist organization, that they should be seen as a legitimate rebel group fighting the Assad regime,” says Amarnath Amarasingam, assistant professor at Queen’s University’s School of Religion and an expert on jihadist groups who has followed ISIS closely since its inception. “If all of a sudden they’re experiencing an influx of hardened ISIS fighters, they would probably push back against it.”

But some kind of cooperation between these groups is inevitable. ISIS has lost much of its sheen. Many of its fighters, foreigners in particular who feel betrayed after ISIS commanders abandoned them in the dying days of the caliphate, have not lost any of their jihadi verve and will be looking for another group to join.

“Certain members of Hurras al Din have a historical relationship with older al Qaeda leaders, including Baghdadi,” Amarasingam adds. “So even though these broader movements might move toward al Qaeda, interpersonally people will still have each other’s backs.”

It all feels so familiar. When the Syrian civil war first began and Turkey opened its borders to allow foreign fighters to join the fight against the Syrian regime, thousands of would-be jihadists flooded in, shifting from one group to another until they found a suitable group for whatever goals they had set for themselves. Some settled on ISIS. They made contacts and formed networks. They will no doubt turn to those networks now.

Abu Bakr al Baghdadi died “whimpering and crying”, claimed U.S. President Donald Trump, but he may, in the end, have the last laugh.