What to make of John Kerry's visit to Ottawa

It’s easy to make too much of the visit, and perhaps too little, writes Michael Petrou 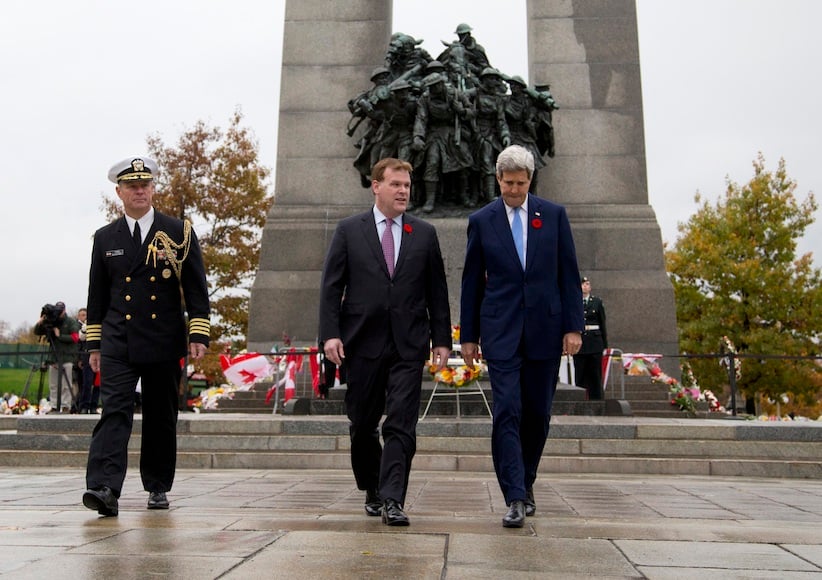 Among the many things that didn’t, in fact, change because of last week’s murders of two Canadian soldiers, and an attack on Parliament, by men thought to be radicalized Islamists, is Canada’s relationship with the United States and, specifically, the relationship between the two governments running both countries.

American Secretary of State John Kerry came to Ottawa on Tuesday. He laid a wreath at the National War Memorial, where Cpl. Nathan Cirillo was gunned down while standing ceremonial guard at the Tomb of the Unknown Soldier.

Two different soldiers, from the Royal Canadian Regiment, were there during the ceremony. They stared straight ahead while Kerry covered his heart with his right hand. The steps surrounding the memorial are covered in flowers, balloons and candles, the tomb scattered with small lapel poppies.

At a press conference later in the day, Kerry said he was proud to be in Ottawa representing President Barack Obama and all American citizens, to show solidarity with America’s “closest ally.” Kerry spoke briefly in French. Canadian journalists in attendance treated this as if it were an amusing novelty, like a dog walking on its hind legs. Do it again! Do it again!

Foreign Affairs Minister John Baird said Obama and Kerry were among the first world leaders to voice their solidarity with Canada, and noted that Kerry was the first such leader to do so in person. He thanked him for that.

It’s easy to make too much of this visit, and perhaps too little.

The men set an appropriate tone that expressed an almost familial intimacy. This was different than the mood that prevailed following the attacks against the United States on  Sept. 11, 2001. Barely a week after that day, then-president George W. Bush addressed a joint session of Congress and noted the support America had received from nations such as South Korea and Australia. Tony Blair, then-prime minister of Britain, had flown in for the speech.

This week, Kerry said Ottawa and Washington “will continue to intensify our law enforcement, border protection and intelligence-sharing relationship.” He predicted “tweaks.”

There was no visible daylight between the two regarding the confrontation with Islamic State, the jihadist group that has taken over much of Iraq and Syria and that Prime Minster Stephen Harper said inspired the man who murdered Warrant Officer Patrice Vincent in Quebec last week.

In practice, Canada and America have taken slightly different approaches. Obama said he would strike at Islamic State wherever it is found, including in Syria, where America is now conducting air strikes. Canada is limiting its military activities to Iraq. Kerry gave no indication that the United States would like Canada to broaden its offensive or change its strategy.

Somewhat bizarrely, Baird linked the battle against Islamic State’s propaganda and ideas to Canada’s digital diplomacy efforts in Iran. Canada is making innovative use of the Internet and social media to try to reach out to Iranian citizens, bypassing the government in Tehran. But this is about as relevant to undermining Islamic State’s message as is Canada’s trading relationship with Albania.

And yet, defence and security relations between Canada and the United States are tight, regardless of the political background music. They are simply too intertwined to disentangle and rebuild with every change in government. Even when Chrétien officially declined to join America’s 2003 invasion of Iraq, dozens of Canadians served there anyway, because they were on exchange programs with the U.S. military.

Business and trade are different. Kerry and Baird’s shoulders seemed to drop when they were asked about Washington’s long-delayed decision on whether to approve the Keystone XL pipeline that would take crude oil from Alberta to Nebraska.

“Indeed, of course, it came up,” Kerry said. “It will happen when it is supposed to happen.” Baird said Canada is looking forward to “resolving this challenge.” In other words, they’re still furious at each other.

It was good of Kerry to visit Ottawa. During difficult times, family members should support each other. Even bickering ones.