What will happen when Assad is gone—in Syria and beyond?

The brazen, mid-morning bombing that struck Syria’s military command on July 18, taking the lives of several of Bashar al-Assad’s top advisers, may not have killed the Syrian president himself, but it is hard to believe he will survive the fallout. That stunning blow was quickly followed by a massive rebel assault on the capital, Damascus, the defections of several key generals and, this week, even the prime minister.

If Assad is toppled, his demise will be roundly cheered. But the consequences will be profound, and will echo beyond Syria, affecting the region’s volatile conflicts, those involving al-Qaeda—whose jihadists are now converging on Damascus—Lebanon, Palestine and Iran.

Sectarian bloodletting is possible in Syria. Lebanon and Iraq, with their complex divides—which know no borders—could easily be sucked in. Violence could drag in Israel.

That makes this Arab Spring revolt so different from Tunisia, Libya, even Egypt. The fight is not playing out in some corner of North Africa but in the heart of the Middle East. Syria’s revolt could be a game-changer. Syria, for decades a key player in the region’s geopolitical games, now finds itself a staging point for the ancient struggle between Sunni and Shia Islam, a fight currently playing out in Aleppo in northwestern Syria between Assad’s Shia loyalists and the Saudi-backed Sunni opposition.

Syria may be on the brink—Assad can no longer trust even his closest advisers. But the real fight has only just begun.

Here’s our nifty infographic that illustrates the ripple effects of instability in Syria in the Middle East and beyond. Click on the image below to open up the full-size graphic: 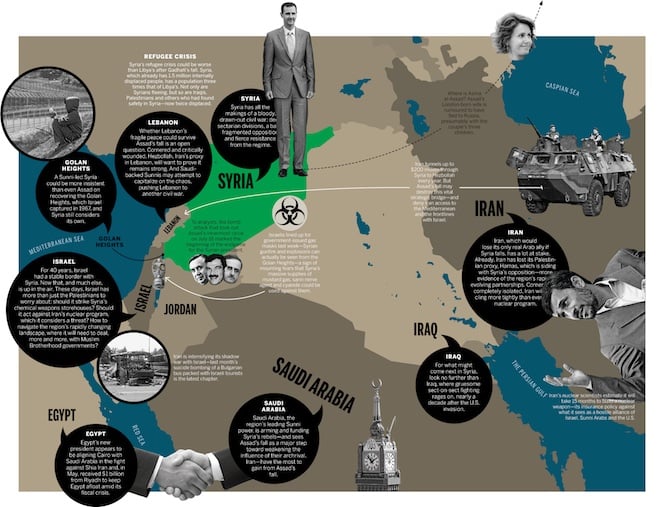