Terry Glavin: Leaders at the G20 ignored their plight. Now pro-democracy demonstrators are in such despair that some have resorted to suicide. 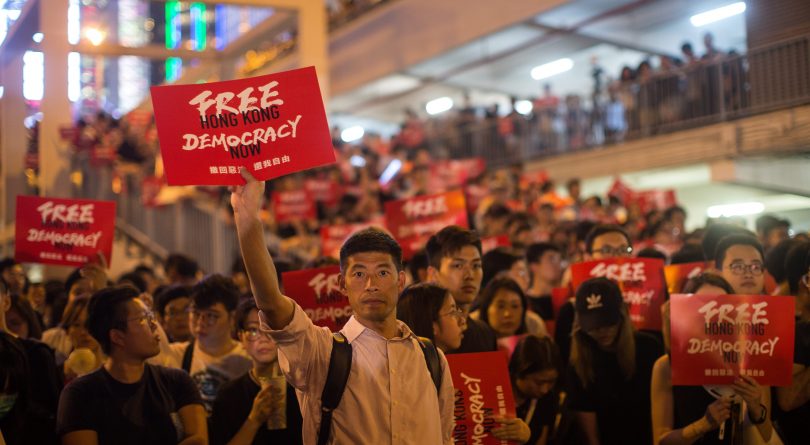 Shirley Ho is no stranger to daunting questions. She’s an astrophysicist, a professor at Carnegie Mellon University, and a group leader with the Simons Foundation Center for Computational Astrophysics. She has a particular interest in the capacity of machine-learning to measure the amount of dark matter in the universe.

Born and raised in Hong Kong, she worked closely with the team of activists that tried and failed to get Hong Kong’s turmoil on the agenda of last week’s G20 Summit in Osaka, Japan. After several world leaders got snippy about the Hong Kong protesters’ dramatic takeover of Hong Kong’s Legislative Council precincts on Monday—we must oppose violence on all sides, was the commonplace criticism—Ho was troubled by some nagging questions.

“They’ve tried everything, and now they see no hope, no way out. What else do you want them to do? What else are they going to do? What would you do?”

Ho helped out in the digital outreach phase of a “G20 Free Hong Kong” initiative that brought tens of thousands of Hongkongers to rallies in front of 19 foreign consulates in the semi-autonomous city last week, and a mass rally at Edinburgh Place in Hong Kong Central last Wednesday. Organized by the Civil Human Rights Front, the clearing house behind last month’s massive pro-democracy demonstrations, the G20 campaign was joined by demonstrations in cities across North America, Europe and Japan.

READ MORE: Inside the fight for Hong Kong

The campaign included the purchase of newspaper advertisements in the U.S. Canada, Japan and several European countries. It contained an open letter asking citizens to pressure their governments to defy Beijing and force Hong Kong’s turmoil onto the G20 agenda. “We need your support,” the letter read. “Let freedom prevail at the upcoming G20 summit and beyond. We can be saved, if you act now.” A crowdfunding campaign for the advertisements had reached its goal of HK$3 million within 12 hours. It ended up raising HK$5.4 million, about $900,000 in Canadian dollars.
“And it all fell on deaf ears,” Ho pointed out.

More than half a million Hongkongers flooded the streets again on Monday, after the close of the G20 summit. A group of several hundred protesters, mostly teenagers, smashed their way into the Legislative Council, occupied the meeting chamber for several hours and sprayed graffiti on walls. After protracted and emotional deliberations about whether to stay or leave, they finally retreated in clouds of tear gas and pepper spray.

Predictably, Beijing reacted by demanding swift retribution for the “criminal responsibility of violent offenders.” The U.S. State Department chimed in: “We urge all sides to refrain from violence.” The United Kingdom’s Foreign Secretary, Jeremy Hunt: “We in the U.K. condemn violence on all sides, and many people who strongly support the pro-democracy demonstrators in Hong Kong will have been deeply dismayed by the scenes they saw on TV last night.” The U.N. human rights office in Geneva: “We ask protesters to demonstrate and express their grievances in a peaceful manner.”

The problem with lectures like these is that Hongkongers have demonstrated an astonishing degree of non-violent discipline in their years of resistance to Beijing’s continuing encroachments, and Beijing continues to tighten the noose, undeterred. In its commitments under the 1997 handover treaty with the United Kingdom, which expires in 2047, Hong Kong was to remain in control of its affairs. The people were promised universal suffrage—one person, one vote. That promise was broken. Candidates for the chief executive’s office are first vetted by Beijing. The legislative council is divided between directly elected representatives and “constituency” members who are overwhelmingly in hock to the Chinese Communist Party.

The three-month “Umbrella Movement” protests of 2014 went nowhere. Their leaders were jailed. Pro-democracy candidates have had their elections to the legislative council annulled. And Beijing’s ruthless encirclement continues unabated.

Last month’s series of unprecedented protests, involving millions of people, maintained an astonishing degree of non-violent discipline, bringing Hong Kong to a total standstill more than once. But all the protesters have to show for it is a tactical victory involving their immediate grievance—an extradition bill that would make Hong Kong’s independent judiciary subservient to the Chinese Communist Party’s penal system on the mainland has been temporarily suspended.

When Hongkongers turned to the world’s liberal democracies for help, their pleas went unanswered. Prior to the G20, China’s assistant minister of foreign affairs Zhang Jun warned: “We will not allow the G20 to talk about Hong Kong matters.” Japanese Prime Minister Shinzo Abe is reported to have mentioned the crisis in Hong Kong in passing during a conversation with Chinese President Xi Jinping. At the close of the summit, U.S. President Donald Trump, while praising President Xi, said Hongkongers want democracy—which everyone already knew. About the storming of Hong Kong’s officially gerrymandered legislature, Trump said the situation was “very sad.”

That was about it, and now the situation in Hong Kong has moved beyond something that is merely sad.

“People are really afraid to talk now. They’re afraid to come forward because they’re really afraid to get arrested,” said Ho, who maintains close contact with the protest leaders. The crime of rioting—Beijing puppet Carrie Lam, Hong Kong’s chief executive, has insisted on calling the protesters rioters—carries a 10-year jail term. Scores of Hongkongers have been injured in police violence—rubber bullets, beatings with truncheons, and the debilitating effects of tear gas. More than 40 protesters have been arrested so far. “They get their phones taken away from them, and the police get their passwords,” Ho said, “so they are all really afraid.”

And they are resorting to ever more desperate measures. Like smashing windows and storming the legislative precinct. And committing suicide. “It isn’t widely reported, because we don’t want people to kill themselves. But they’re at this point. They’re killing themselves now. Peaceful things, we’ve done it. Voting, we’ve done it. Now people have started killing themselves. That’s the juncture of July 1. That’s where they’re at.”

Two weeks ago, in what many Hongkongers have come to understand as an act of martyrdom, 35-year-old protester Leung Lin Jie fell from Pacific Place, a tower overlooking the scene of a violent police charge on marchers, after apparently resisting first responders’ efforts over several hours to retrieve him from the edge of the building’s roof.

After it became apparent that the G20 summit was going to be a washout for Hong Kong’s pro-democracy movement, Lo Hiu Yan leapt off a highrise building after writing what amounted to a suicide note on the walls of the building’s stairwell. Her last message on Instagram. “Dear HongKongers: We have been resisting for a long time, but we must never forget what we are fighting for. We must keep going.”

The young woman reiterated the protesters’ demands: Completely withdraw the extradition bill, retract the executive statement declaring the June 12 protest a “riot,” release all arrested students, prosecute the police for their brutality. “I wish I can trade my humble life for the common dream of over two million people. Everyone please keep going!”

Another young woman jumped to her death from the International Financial Center building after posting this message on Facebook: “Hang in there, Hong Kong! I really wish to see your victory. I won’t be able to make it to the July 1 protest. I can no longer see hope. It feels like there is no tomorrow. I am very tired …”

Shirley Ho sees herself as a fairly typical American liberal, a centrist. “But I’m just really angry now,” she says, “with the Hong Kong government pitting the kids and police against each other, knowing this will escalate, and more kids will be willing to die.”

That’s why she’s wholly unimpressed with the whingeing about the takeover of the legislative council chambers on Monday. Hong Kong’s protest leaders have generally refused to condemn the takeover, and even though it is a radical departure from the non-violence of the movement so far, it was nothing compared to the police violence of last month.
“So some glass was smashed. There was graffiti. Nobody got hurt,” Ho said. “No stores were broken into. No cars were broken into.” The protesters left written signs through the legislative precinct cautioning against damage to works of art or books. They left money in coolers when soft drinks were taken.

“These young people, they see no hope in the future. They have no right to choose their leaders. Their leaders aren’t accountable to them. They’re accountable to Beijing. And which country stands up to China? Hong Kong is the last bastion of democracy in the second most powerful country in the world, and these kids go to the front of the line, risking 10 years in prison. They’re risking persecution their entire lives. Not everyone can leave Hong Kong and seek asylum somewhere else. So what are they going to do?

“Hong Kong is their home.”