Where is Canada's answer to Rand Paul?

Rand Paul may be one of America's most divisive politicians, but he's leading the charge against the Patriot Act. Scott Gilmore on the lessons Canada can learn 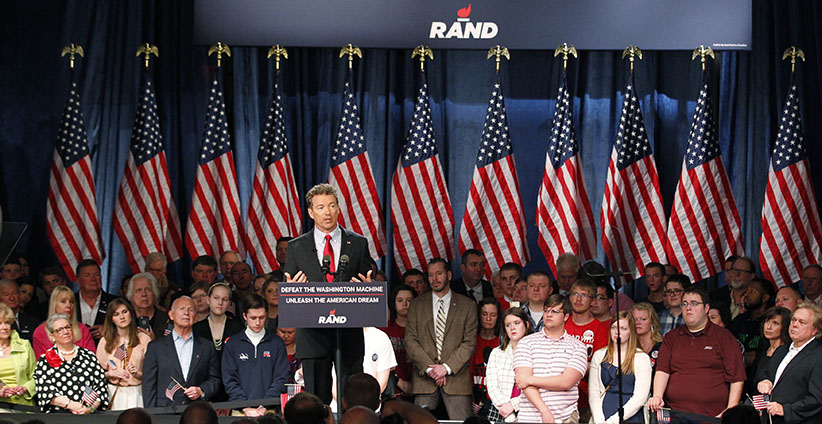 Kentucky Sen. Rand Paul is arguably one of the most divisive politicians in America. From the left, he is often ridiculed for his relatively extreme libertarian and isolationist views. From the right, many of his fellow Republicans are frustrated by his reactionary Tea Party activism. Which is why it is so remarkable that, this week, he was instrumental in leading a rare display of bipartisanship: a cross-party revolt that appears to have derailed the long controversial, yet resilient, Patriot Act.

The legislation giving the U.S. government sweeping surveillance and security powers will expire at the end of May. Due to Paul’s procedural wrangling, and eroding support within both the Democrat and Republican parties, an extension now appears to be almost impossible. Time is running out, and observers are doubting that enough votes can be found. Even though congressional leaders are reconvening legislators in a last-ditch effort to find a compromise, the National Security Agency (NSA) has already begun to shut down some of its domestic intelligence-gathering operations.

The Patriot Act was passed in 2001, while the ruins of the World Trade Centre still smouldered. Its invasive provisions reflected a post-9/11 America that was shocked and terrified. The public was more than willing to sacrifice privacy for safety. Although the act was widely criticized for permitting warrantless searches and the wholesale collection of telephone and Internet records, opinion polls by the Pew Research Center recorded that a majority of Americans still supported it, even a decade later.

Public attitudes have shifted recently, however. Last week, another Pew poll revealed that 65 per cent of Americans believe there are inadequate limits on “what telephone and Internet data the government can collect”. Lawmakers of all ideologies are noticing a growing belief that American intelligence agencies have gone too far, which has given them encouragement to support Paul’s previously lonely opposition to the Patriot Act.

There could be several reasons for this apparent sea change in public opinion. The lingering shock of 9/11 has faded; in lower Manhattan, the memorial was completed several years ago and the replacement Freedom Tower now dominates the skyline. American forces have withdrawn from Iraq and Afghanistan, giving hope to many that the “war on terror” is finally coming to an end, thus making the compromises of the legislation less necessary.

Related: Scott Gilmore on how heightened security will only increase our fears

But the most likely cause is the continuous stream of revelations that the U.S. government uses the Patriot Act to spy on the American public. The most prominent of these were provided by former NSA security contractor Edward Snowden. He disclosed that every single American was being spied upon, his or her digital life captured, analyzed and kept by intelligence agencies. But there were many other surprises, too. For example, the American Civil Liberties Union revealed that the FBI was helping police departments across the country to track local cellphones without warrants. A lengthy investigation by the Washington Post exposed that there are now more than 1,270 U.S. government agencies working on programs related to counterterrorism, homeland security and intelligence. Piece by piece, people have come to realize that a massive, and largely invisible, domestic security infrastructure has been built that seeks to protect Americans by spying on their every move.

The American public has clearly decided it is no longer willing to trade quite so much of its personal liberty in return for promises of greater security. And American politicians, on the left and right, are listening.

It is interesting to compare this transformation to what has happened in Canada. In February of this year, shortly after the terror attack on Parliament Hill, an Angus Reid poll found that 82 per cent of Canadians supported the Conservatives’ proposed Bill C-51, which limits Charter rights and gives the government new powers to combat security threats. As time passed, and more information was revealed about the considerable extent of the bill, public support began to soften and some critics declared it “Canada’s Patriot Act.” When Liberal leader Justin Trudeau took the politically expedient decision to back the legislation, there was mockery from the NDP benches and grumbling within his own caucus. But a follow-up poll this week shows that 72 per cent still support it, “all things considered.” Compared to Americans, Canadians are clearly not as troubled about their own privacy, and remain much more trusting of their government and security agencies.

In Canada, though, the public’s opinions about legislation are not especially relevant, as they are almost always subservient to the perceived desires of the ruling party’s base. Even if support for C-51 had collapsed (as some earlier polls suggested), it is impossible to envision members of Parliament breaking ranks, as Sen. Paul has done. Liberal and NDP MPs have an almost perfect record of voting with their leaders in the House of Commons; and the most independent-minded MP in the House, Conservative James Bezan, supported his caucus almost 99 per cent of the time.