Who are Syria's White Helmets?

And why is the Nobel Prize-nominated rescue group being targeted by a Canadian-based academic website? 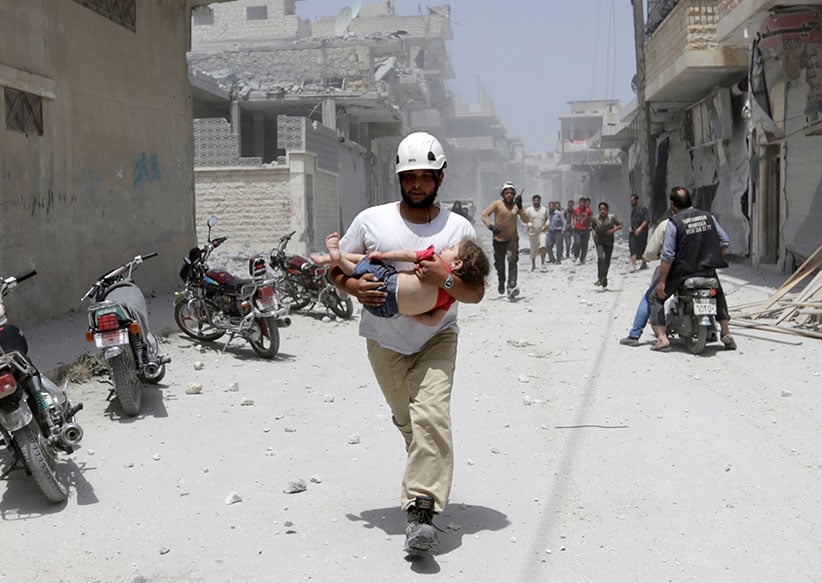 A civil defence member carries an injured girl at a site hit by airstrikes in the rebel-controlled area of Maaret al-Numan town in Idlib province, Syria June 2, 2016. (Khalil Ashawi/Reuters)

Stripped down to the most heart-wrenching imagery, the trailer for the Netflix-produced documentary The White Helmets is undeniably powerful. Backed by a haunting and disembodied rendition of When the Saints Go Marching In, it is a spine-chilling two-minute-and-18-second glimpse into a devastating war, peppered with moments of both tragedy and triumph.

The saints, in this case, are a group of volunteers reportedly made up of everyday Syrians—construction workers, barbers, shopkeepers—who have been risking their lives since 2013 in rebel-controlled areas of Syria, rescuing civilians from the brutal bombing campaign of the regime and its Russian ally. They are technically known as the Syria Civil Defence, popularly called the White Helmets because of the white hard hats they don.

But not everyone believes they are who they claim to be. Over the last week, Syrian and Russian warplanes have wreaked havoc on the White Helmets. “They have bombed all four of our centres in Aleppo city,” Ismail Alabdullah, a 28-year-old volunteer and former English major at Aleppo University, tells Maclean’s by telephone. “Ambulances have been destroyed, rescue equipment. One of our centres was destroyed completely.”

Simultaneously, a Canadian organization has launched a scathing attack on them, accusing the White Helmets of being “terrorists” and a “propaganda arm” of the U.S., U.K., and Israel. The Centre for Research on Globalization (CRG), based in Montreal, accuses the group of faking rescue operations and embedding with al-Qaeda and Islamic State militants. In recent weeks, its website, GlobalResearch.ca, has published more than a half-dozen articles claiming to “uncover” the deceit behind White Helmet operations, including an open letter by a retired University of Winnipeg geography professor calling on the NDP government to backtrack on its call to award the White Helmets the Nobel Prize.

The media blitz appears to be linked to a major regime offensive after a ceasefire agreement brokered by Russia and the U.S. collapsed in mid-September. The deal was meant to give aid organizations a chance to reach civilians trapped in rebel-controlled parts of Syria, where the White Helmets operate. Its demise has led to a looming humanitarian catastrophe, the WHO has warned, as regime and Russian jets target the last remaining vestiges of civilian support left in the most vulnerable parts of Syria.

What is behind the CRG’s campaign? Disparaging the last line of defence civilians have against certain death feels like a very un-Canadian thing to do, but Michel Chossudovsky, professor emeritus of economics at the University of Ottawa and the founder of the CRG, is unapologetic. “I haven’t investigated the White Helmets personally,” he says,  “but we are dealing with a lot of mainstream media lies. The White Helmets operate solely in al-Qaeda protected areas. That’s certainly an observation we can make and something that gets no attention in the mainstream media.”

His allegations are only partly true. According to journalists and aid workers who have been on the ground in rebel-controlled Syria, no one group, outside of Islamic State and the Kurds, dominates any single region. The complexity and fluidity of alliances between a vast array of militias, some extremist and others moderate, renders sweeping statements like “al-Qaeda protected areas” meaningless.

Jake Simkin, a photojournalist based in Turkey who has spent months at a time embedded with the White Helmets in rebel-held east Aleppo, explains: “If the accusation is that the White Helmets work with ‘terrorists,’ then it would have to be yes to a certain degree,” he says. “They have to negotiate access [to al-Qaeda-held neighbourhoods] to be able to save civilians. As they have a humanitarian agenda, they are allowed that access. The group I have been with has assisted wounded Shiite militias and government soldiers who were trapped in destroyed buildings so they could surrender and be sent back into government areas. The reason the White Helmets were formed was because the Syrian Red Crescent is often not allowed humanitarian access into opposition-held Syria. No humanitarian aid travels from the capital toward the opposition. It has been one of the tactics the government has used to make the rebel held areas surrender their arms.”

From the perspective of some White Helmet critics, however, there are few if any civilians in rebel-controlled Syria, only “terrorists.” The broad brushstroke echoes Russia’s and the Syrian regime’s narrative, which has used the terrorist label to justify their atrocities.

In some instances, CRG provides sound insight into some of the world’s most troubling issues, marshalling a respectable flock of international experts to its cause (albeit almost exclusively from the political left).  In other cases, however, it slips dangerously into the surreal world of secretive cabals and conspiracies, and in the case of Syria it seems to go off the rails.

Reports published on its website rely on sources in regime-controlled areas. In one article, the author quotes civilians in Tartous, far from rebel-held territory, who claim that they know the White Helmets are “terrorists.”

Chossudovsky argues, not without some justification, that Western nations have backed “terrorists” in their bid to topple another Middle Eastern regime. But expanding that accusation and labelling as terrorists others who oppose Syrian President Bashar al-Assad, including a group of civilians whose sole purpose is saving lives, at the very least needs to be challenged: where is the proof?