Who is Hong Kong's umbrella man?

Many of the umbrella protesters are politically motivated, teenage students who are equal parts polite and daring 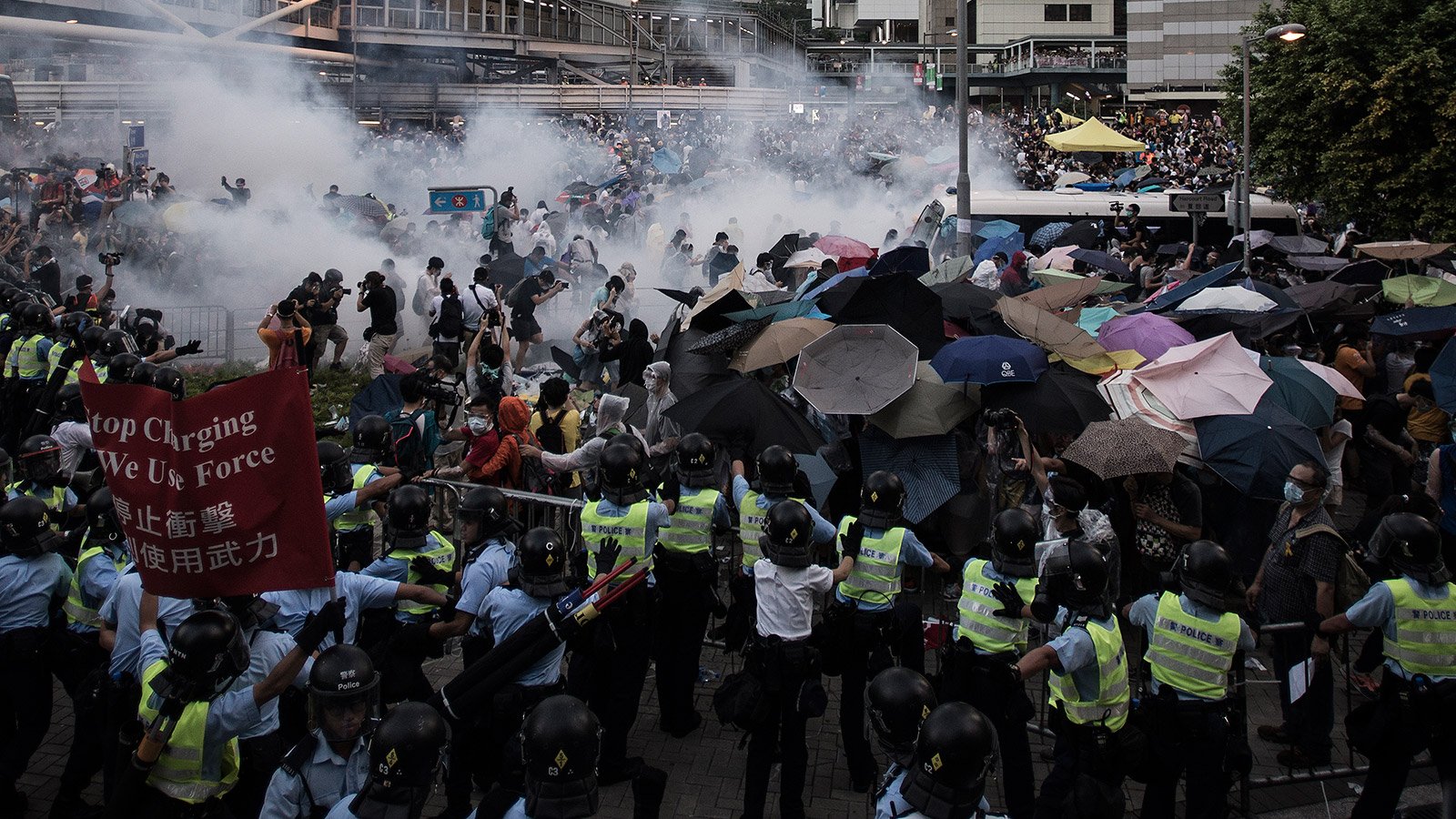 A lone protester holds an umbrella triumphantly in the air as he walks though a white cloud of tear gas. The image of the unknown protester, or umbrella man as he is being called, has come to represent the determination of the student protesters demanding democracy for Hong Kong.

While the image of a lone protester against the might of the Hong Kong police has captured the world’s imagination, the protest is in reality made up of lots of umbrella men and woman, tens of thousands of them. Most of them are politically motivated young people, angry at China’s plan to vet leadership candidates in 2017 despite promises to grant the city full universal suffrage.

And while revolutions can be associated with rioting and looting, this has been a revolution with manners and a surprising degree of discipline. One of the protest leaders is a bespectacled 17-year-old school student, Joshua Wong, who looks like he should be playing video games instead of giving heated speeches about Hong Kong. Conversations get most heated when discussions turn to the merits of different political systems.

Among the protesters is Chloe Ho, a soft spoken 20-year old history student. “For me democracy is a fundamental step to establish a civil society,” she says. “It is an exit door for totalitarianism. I think the real thing about democracy is that you can stop them when they treat you badly.”

Another history student, 18-year-old Mark Li agrees, “In a democratic society the rights of people can be safeguarded. If there is no democracy the government can do what they want.”

Li says that it is not just about getting democracy but how it can be used for social change. “Right now there are so many social problems, such as the widening income gap. The connections between the government and the rich people, they control many things in Hong Kong. I think it is a big problem.”

“Real estate prices are going through the roof. It always used to be expensive to have an apartment here but a recent survey came out and now even for Hong Kong it is crazy,” says Lokman Tsui, a  lecturer at the school of journalism and communication at the Chinese University of Hong Kong. “There is a survey that said that you need 13 or 14 times your annual income to buy an apartment, which means that realistically no one except the really wealthy can.”

There is also a backdrop of tensions with mainland China and a fear that the Chinese government will, little by little impose the same restrictions on the Internet, media and freedom of speech that are enforced on the mainland. “They just can’t keep their hands off Hong Kong,” says Ho, referring to the Chinese government. “What we are doing is hoping that they can just leave us alone. The Chinese government is trying to put more pressure on us.”

Many students here say that while their parents are worried about them, they support what they are doing. Peaceful demonstrations are not unusual in Hong Kong: Every year on July 4th, the anniversary of the Tiananmen Square protests in Beijing, huge numbers of people hold a vigil in memory of those killed. “I have been concerned about politics and social issues for quite a long time because of my parents. They used to take me to June 4th demonstrations,” says Li.

Perhaps one of the most impressive elements of the protests is the self restraint of the students. Even when the police used pepper spray and tear gas against them they are determined to remain peaceful. “Hong Kong people are civilized and even in our protest we clear the rubbish and distribute food and other resources. We want other people to know that we are not mobs,” says Li.

With their bookish looks they are unlikely revolutionaries, but appearances can be deceiving. As the evening goes on tensions rise, the students gather outside the Chief Executive’s office waiting to hear his response to their demands to step down. Suddenly the police start to line up in formation readying to take action. The are rumours that they are armed with rubber bullets and tear gas. The students at the front sit on the ground, they are not going anywhere. They wear masks and googles, their arms wrapped in cling film to protect against tear gas.

One of the students at the front pulls his googles on, his hands shaking with nerves. “I am ready,” he says. “I am afraid but I will stay.” A short time later the Chief Executive announces he will negotiate with the students and both sides stand down.

“They are really smart and really courageous,” says Lokman. “They are afraid but are stepping up. I couldn’t be more proud of them.”