Why Israel is saving Syrian rebels

'All my life I was told Israel is my enemy. But only Israel is our friend,' says one fighter from a hospital in Tzfat. 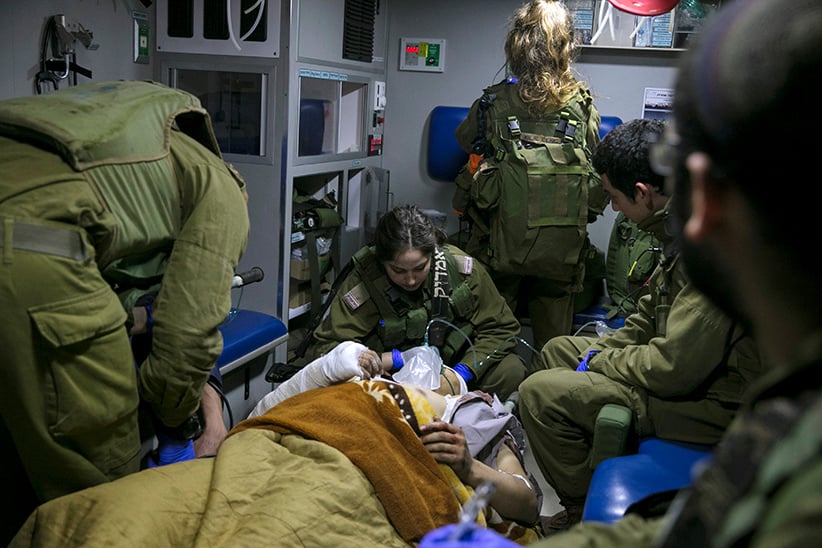 On a hospital bed at the Ziv Medical Center, high in the Upper Galilee Mountains, a Syrian rebel who goes by the name Ramadan was still wincing in pain from a bullet that had torn through his right shoulder only 10 days before. But he said there was something important he wanted to tell me. The gruff-voiced, barrel-chested fighter sat up on his hospital bed and began.

How it came to pass that Ramadan ended up in an Israeli hospital in a picturesque mountaintop city said to have been founded by Shem, the son of Noah, is straightforward enough, even with some of the details necessarily left out—Ramadan’s real name, for instance, and the name of his home village, where his worried wife and two sons were waiting for him to come home.

“I am a fighter for the Free Syrian Army. I was in a battle to protect my village from soldiers of Bashar Assad. They were attacking us,” Ramadan said. In the fighting, he was hit by a round fired from an MG3 machine gun. It tore open his upper arm and shredded his shoulder. The FSA unit won the battle. “My village is still free,” Ramadan said. But he’d been severely wounded. He could have bled to death.

What is not so straightforward is how it came to pass that more than 3,000 Syrians have been taken in by Israeli hospitals over the past four years.

The story begins with a single, unofficial act of mercy in the middle of the night, on the Golan Heights, in the wee hours of Saturday, Feb. 16, 2013. Seven badly wounded Syrians had been brought to the Syrian side of the border fence. They were found lying on the ground, on mattresses. A snap decision was made at the scene to medevac them straight to the Ziv Medical Center at Tzfat. Their lives were saved. They were returned to the border 10 days later.

Within months, a small-scale, clandestine medical evacuation had become a broad-daylight triage operation, but not without first finding a resolution to a political nightmare and a vexing moral dilemma.

When the Israel Defense Forces (IDF) saved the lives of those seven fighters, the Israeli government knew that word was sure to get out among the Syrian rebel groups that help was at hand, courtesy of the IDF. But word would also get out to the Assad regime, and to the various Islamist factions at war with both the FSA and Assad.

So how to sort out the problem of the wounded Syrians being brought to the border fence on the Golan Heights? That job fell to Doctor Salman Zarka, a former IDF Colonel and a veteran of the Second Hezbollah War in Lebanon. Zarka had served as the medical corps commander for the IDF’s Northern Command, and one of his key IDF duties had been to plan for the possibility of war with Syria, which had lost the Golan to Israel in the Six Day War of 1967.

Most of the fighting during the 1973 Yom Kippur War, which began with a surprise attack on Israel by Syria and Egypt, had taken place in the Sinai Desert and the Golan. Zarka had also served with the IDF’s Golan division. Zarka is a Druze—neither Jews nor Muslims, the Druze people venerate Jethro of Midian, father-in-law of Moses, as their holiest ancestor-prophet. Born in the Israeli Druze village of Peki’in, Zarka was familiar with the Golan’s every nook and cranny.

“Of course we wanted to provide medical support, but we had decided not to take part in this internal conflict,” Zarka told me in an interview. “By 2013, we realized the battles were very close to our borders, and we needed to decide what to do. What is our policy? It is legitimate according to international law to close the border against your sworn enemy. But if we become involved, there are some who would say we are taking part in this internal conflict, so it would be better to say we are not involved in this. But we had other strong reasons to provide medical support.”

Zarka explained the reasoning that went into the policy debate this way: “The first thing is to be a human. The second thing is to be a physician. The third thing is to be, well, it is, I think, it is religious principles. It is written in different Jewish books, and the Torah, that we have to save lives. And it is written in the other religions too. In the Druze religion, in my religion, it is ordered that you have to save lives, so you would have to provide medical support.”

“The other thing that is very unique to the Jewish people is the imperative of the Holocaust, an understanding of what it means to be helpless. So you weigh the different reasons,” said Zarka, 52. “And I am very happy that the reason to provide medical support weighed more than other things.”

After obtaining approvals from the highest levels in Jerusalem, Zarka established a three-echelon triage system: immediate medical assistance to Syrians at the border fence, a field hospital staffed with 20 on-call doctors near the border, and a system for evacuating the worst cases directly to hospitals in the Galilee.

Israel’s border with Syria runs the length of the Golan Heights to a total of 76 km, but it’s only those portions of the Israeli-Syrian frontier controlled by the Free Syrian Army and competing Islamist groups that wounded and sick Syrians are brought to IDF posts along the border fence.

What this means is that it is quite possible that jihadists with a fanatical hatred of Jews and of Israel are being treated at the Ziv Medical Center in Tzfat, and the Western Galilee Hospital in Nahariya, as well as other Israeli medical facilities. The policy is simple: don’t ask. Everyone is to be treated according to Israeli medical standards and practices. “It is not important,” Zarka told me. “When the patient enters the emergency room, it doesn’t matter about colour or gender or country of birth or anything.”

About a third of the 3,000 or so Syrians taken in by Israel since 2013 have been treated at the Ziv Medical Center, where Zarka was appointed director in October 2014.

The flipside is that when the Syrians are discharged from hospital and brought back to the Syrian border—and they all want to go back, to be with their families, or to take up the fight again—great care is taken to conceal the Israeli origin of everything in the “care packages” they’re given. No Hebrew lettering on medications. No evidence of Israeli origin on anything. Collaboration with “the Zionist entity” invites a jihadist death sentence, and much the same from the Assad regime.

The Syrians taken in by Israel are often suffering from the most atrocious kinds of war wounds—severed limbs, bomb-blasted faces, collapsed internal organs—and they’re not all fighters. Many are children, and many are suffering from ailments not directly related to guns or bombs. The Syrian American Medical Society counted 252 attacks on Syrian health centres last year, almost all of them carried out by Assad’s forces and Russian fighters. An unconscious child in diabetic shock was rescued at the border and taken to Tzfat earlier this year. She was treated at the Ziv Medical Center for three months. Her mother was given a year’s worth of insulin and some training in how to administer it, and she and her daughter were returned to the border.

“You become their family,” Zarka said. “You celebrate holidays, birthdays, and then they go back to Syria, and we are sad they are leaving. We are not sure of their destiny.”

Most of the Syrian medical system has been destroyed in what Ban Ki-Moon, the former UN Secretary-General, has called a campaign of deliberate war crimes. But Ramadan, the Free Syrian Army fighter, was not much impressed by the UN. “The world does not want democracy. The world does not want Syrians to have freedom. The United Nations does nothing. It is for talking, that is all.

“The United Nations could take Assad out of Syria, but they do not. They do nothing.”