Why refugees are fleeing France for Britain 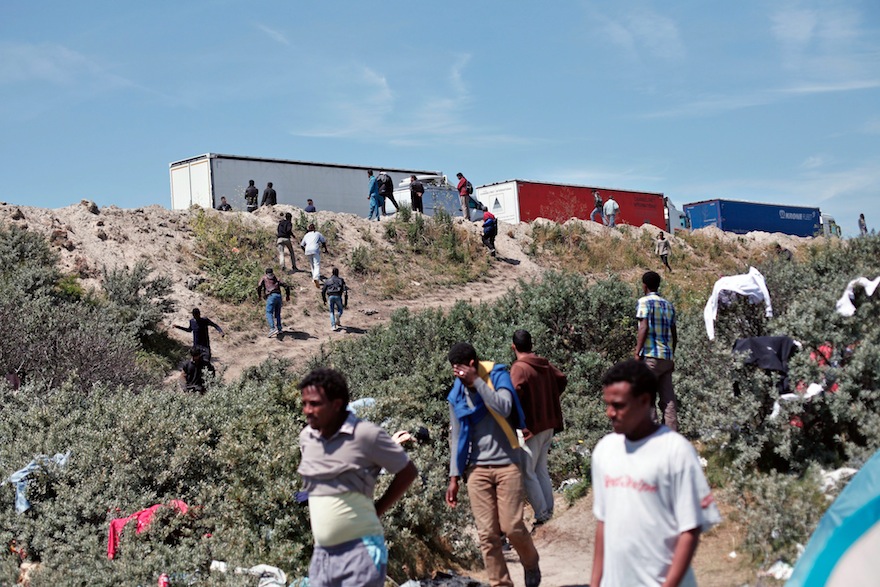 Migrants stand along a motorway leading to a ferry port to cross the English Channel, in Calais, northern France, Wednesday, June 24, 2015. Train services between Britain and France beneath the English Channel resumed Wednesday but the disruption stoked by striking French port workers the day before persevered. Adding to the chaos, illegal migrants who are camped by the thousands in the port city of Calais were seen trying to stowaway on vehicles stuck in traffic jams. (AP Photo/Thibault Camus)

Whatever happened to the British stiff upper lip? The country that once, quite rightly, produced a wartime propaganda film entitled Britain Can Take It, has collectively lost its mind over a few thousand would-be migrants swarming the French port of Calais in an effort to get to England.

The scenes in Calais are admittedly gripping and often disturbing. An unofficial camp nearby houses hundreds of desperate people, including young children, who have fled war or poverty, or who have simply decided Britain offers more opportunity than the homes they’ve left behind—usually in the Middle East, Africa and Central Asia. It’s known as the “jungle” and contains few of the amenities of a real refugee camp, such as plentiful water and sturdy shelters.

Near the camp, and for as many as 100 km around it, any truck driver who stops to fuel up, to get some sleep, or who is caught in a slow-moving traffic jam, is liable to find his vehicle the target of young men trying to force their way inside, or to cling to its undercarriage. Some die in the attempt. An Eritrean man with a wife and young child told the Guardian newspaper that the French police advised him to avoid moving vehicles and to try to get inside a parked one instead, because it would be safer. He said they told him they’d leave him alone if he did that.

It’s that last detail that infuriates a lot of Britons, who suspect French authorities aren’t really interested in stopping migrants heading to Britain, a popular destination for those who have family or friends there, as well as English-language skills, or who believe it’s a more welcoming place for migrants than other countries in Europe.

In recent days, the perceived chaos at Calais has gotten worse because of a ferry workers’ strike, which migrants are exploiting. In the process, they’ve created a political storm in Britain. Prime Minister David Cameron says what’s unfolding at Calais is “totally unacceptable,” and has pledged to make Britain a less easy place for illegal migrants to enter and work in. 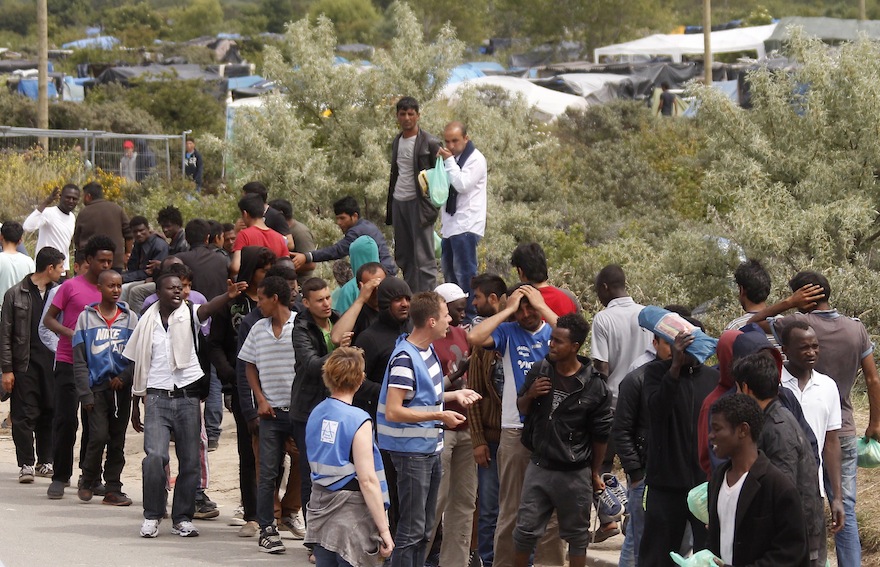 Migrants queue to receive their daily food distribution in a makeshift camp known as the “jungle”, in Calais, northern France, Thursday, June 25, 2015. Migrants from Sudan, Eritrea and elsewhere are camped by the thousand in the port city of Calais trying to reach Britain, where they believe they will have better job prospects. (AP Photo/Michel Spingler)

The Telegraph, in a fairly typical headline, described a truck driver on the “frontline” against illegal migrants. The driver had used a firecracker to clear migrants out of his truck, so he might not have objected to the martial language, which was nevertheless ridiculous—but hardly out of step with the rest of public debate in Britain.

Despite all the overheated rhetoric in the British press and Parliament, the influx of migrants from Calais is tiny, about 40 a day, or 15,000 a year. Most asylum-seekers come to Britain the same way they come to Canada: by plane, usually with visas they then overstay. Even if one looks at the total number of refugees in Britain, not just those arriving on trucks from Calais, it’s much lower, on a per capita basis, than in other European counties, such as Sweden. And Europe’s refugee problem is insignificant, compared to the migrant crisis that has battered several countries in the Middle East, especially those most affected by the wars in Syria and Iraq.

About a quarter of Lebanon’s population are refugees. Turkey has almost two million registered Syrian refugees. Hundreds of thousands are in Jordan. The Kurdistan regional government in northern Iraq, in the midst of fighting an existential war against Islamic State, is also hosting more than one million displaced Syrians and Iraqis—and is doing so with more hospitality than most Western counties would likely show if faced with a similar challenge.

Imagine if Canada were to quickly absorb some eight million refugees, or about one-quarter of its population, and you have an idea of what Lebanon and Iraqi Kurdistan are dealing with. Yet Canada’s attitude toward migration is no better than Britain’s. Politicians here congratulate themselves for pledging to accept the comparatively paltry number of 10,000 Syrians over three years.

In Britain, Cameron believes he has little choice but to be firm on migration, as he is attacked on the issue from his political left and right flanks. Acting Labour Party Leader Harriet Harman wants to know what he is doing to pressure France to crack down on the supposed problem. And, for his conservative base, some of which he risks losing to the populist U.K. Independence Party, the perception of unchecked immigration is the issue that most alienates them from the European Union.

Cameron has promised to hold a referendum by 2017 on whether Britain will stay in the EU. He wants Britain in, albeit under renegotiated terms. But if enough Britons feel their country is being used as a migrant dumping ground by other EU member states, they just might vote to leave.

Cameron could take a braver approach. Postwar immigration has been good for Britain. It lost its empire, but remains a global business and cultural leader, in part, because it is open to the world. It should remain as such.

The British prime minister could also be a little more forthcoming about why so many migrants are on the move. He said Britain must work to stop migration at its “source,” pledging to work to “break the link between getting in a boat and getting settlement in Europe.”

But the “source” of migrants isn’t the leaky, overcrowded boats on which hundreds perish trying to cross the Mediterranean. They’ve come from somewhere else. They’ve left poverty and political upheaval, the barbarism of Syrian dictator Bashar al-Assad, and Islamic State’s rampages through Iraq and beyond. Tighter border controls won’t slow the tide of migrants trying to reach Britain. Reason to hope for a better future in their home countries might.