One can imagine struggling citizens on both sides of the Turkish-Armenian border, united in a plaintive cry: 'Tear down this wall' 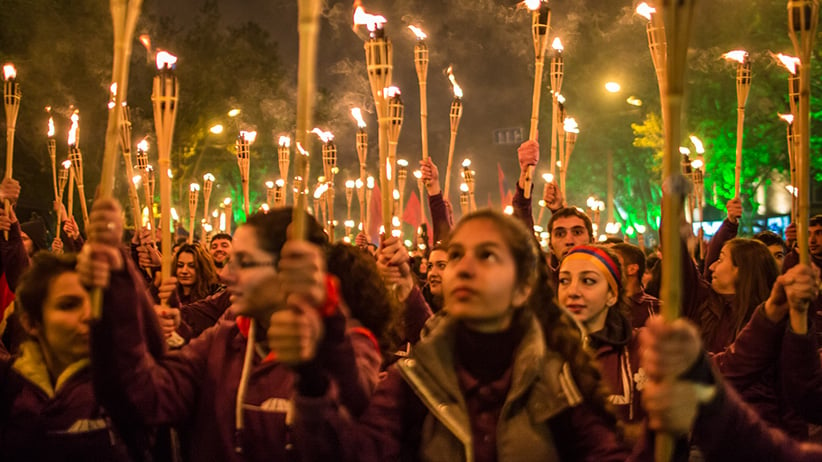 In the months leading up to the April commemoration of the 100th anniversary of the Armenian genocide, the question has been repeatedly asked: Will Turkey acknowledge the atrocities committed by its predecessor state, the Ottoman Empire, as genocide? So far, the answer is a resounding and emphatic no.

The border between Turkey and Armenia remains closed. The two countries have failed to establish diplomatic relations despite the fact that at the time of the dissolution of the Soviet Union in 1991, Turkey actually recognized the independent country of Armenia.

The modern-day standoff has several duelling explanations. Armenia says that the border with Turkey on its side is open and that Turkey has established a blockade to impose economic hardship on Armenia.

Turkey says it closed its borders with Armenia in solidarity with its ally and fellow Turkic country Azerbaijan, over the continuing territorial dispute between Azerbaijan and Armenia over Ngorno Kharabach. A 4,000-sq.-km enclave (smaller than P.E.I.), Stalin ceded Ngorno Kharabach to Azerbaijani control in the 1940s, in spite of the fact that a significant majority of the population in the enclave was, and continues to be, Armenian.

Historic conflicts among states are common. What is unusual in this relationship is that Turkey’s position takes away its ability to build diplomatic relations with its neighbouring country. This is particularly puzzling, since five years ago Turkey itself adopted a foreign-affairs policy called “Zero Problems with our Neighbours.”

By implementing this policy, Turkey sought to mollify its image in an attempt to gain EU membership. In the last five years, this policy appears to have been eschewed by Turkey in favour of a search for a power-centric foreign policy, where Turkey seeks to establish itself as a regional superpower. One could argue that the five years since the adoption of “zero problems” have seen a deterioration in the relationship between Turkey and its neighbours. This includes its relations with Israel, Greece and Armenia, as well as its Arab neighbours.

One could point out to the hawkish president of Turkey, Recep Tayyip Erdogan, that neighbourly relations require, at a minimum, open borders and diplomatic relations, including the exchange of embassies. A model worth considering is India and Pakistan. In spite of the continuing deep divide between the two countries over Kashmir, they have agreed to disagree while normalizing relations. The Turkey-Armenia situation frustrates regional trade, where the flow of goods and people happens via Georgia rather than a direct route. Civil society on both sides of the divide are outspoken about their desire for an open border. With a population of 75 million, Turkey dwarfs Armenia, a country of only three million people. And yet the poorer eastern region of Turkey could benefit greatly from trade and tourism from its neighbour. Similarly, Armenian cities like Gyumri, nestled within visual distance of the border, would also benefit significantly. For Gyumri, which still suffers from the devastating effects of the 1989 earthquake, an open border could represent a positive shift in its geopolitical opportunities.

It is an extraordinary sight to see Armenian tourists on their side of the border, standing south of Gyumri at a lookout point, holding binoculars to view the ruins of the ancestral capital of Armenia, Ani, less than 10 km away. To visit the historic site, they must travel by road through Georgia—a journey of almost 250 km. Today, this closed border is the last piece of the Iron Curtain still standing.

How did it come to this? In the centuries prior to the genocide, the two peoples—Christian Armenians and Muslim Turks—lived together in the Ottoman Empire. Today the continuing denial by Turkey of historic atrocities has captured the world’s attention, where many countries press Turkey for acknowledgement of the genocide. To add insult to injury, the present Turkish government maintains a closed border and a blockade policy with its neighbour.

As the unfriendly tone between the capitals of Ankara and Yerevan continues, one can imagine the voices of the struggling citizens on both sides of the border, shouting: “Mr. Erdogan, tear down this wall.”

Vahan Kololian is a founder and managing partner of private equity firm TerraNova Partners in Toronto. Born to an Armenian family in Egypt, he came to Canada in 1962 at the age of eight. He is co-founder and chairman of the Mosaic Institute, a think tank that promotes “the constructive engagement of Canadians with connections to all corners of the globe in the resolution of entrenched conflicts.”