Willem-Alexander in, Beatrix out: a Dutch family affair 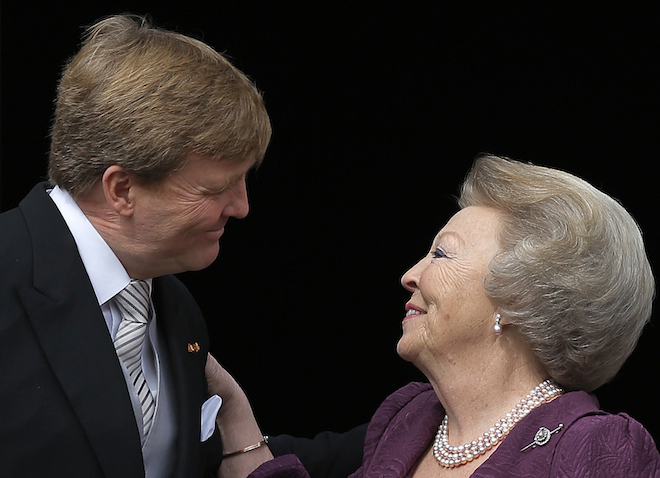 Anyone watching the coverage of the abdication of Queen Beatrix of the Netherlands and the investiture of her eldest son, Willem-Alexander, as the nation’s first king in 123 years was struck by the cozy flavour of the day’s proceedings. Though it was an elaborate affair (the royal website has an exhaustive timetable of events) there was no doubt that, at its heart, this was a transfer within a family firm from a beloved mother to a loving son.

Amid the kisses, hugs and hand squeezes were some teary moments, especially when Beatrix signed away the throne. “Wherever the path leads, your wisdom and your warmth I carry with me,” said her son. “Thank you for the many wonderful years in which we were allowed to have you as our queen. She stood for the values anchored in the constitution. Dear mother, you were queen in full knowledge of the duties you had you were also a wife and mother, and you were fully aware of your duties there too. You were a great support to us all.”

It’s also a joyous moment. The Dutch monarchs have a long standing tradition of abdicating when the time is right. And Beatrix, a widow of 75, is clearly ready to pass on the torch to her son, his wife Máxima and their three daughters. And they did it on Queen’s Day (now King’s Day), a national holiday when the entire nation is drenched in orange, to honour the royal house of Orange.

And there was plenty of glamour too. Last night, Beatrix hosted a gala dinner at the newly restored and reopened Rijksmuseum, attended by heirs to the throne from around the world. And today, after Beatrix abdicated came the investiture. Again, a rather low-key event. Willem-Alexander wears ermine but not a crown—an irony, considering how many of his subjects wore crowns of every shape and colour to the festivities—and is dressed in evening attire, not a military outfit, since he followed protocol and resigned his military titles just before acceding the throne.

But Máxima and her daughters got glammed up. The new queen wore a shockingly bright blue outfit, set off by the humungous Mellerio sapphire tiara (the Royal Order of Sartorial Spendor has a fab rundown on that glittering confection and how it can reconstitute itself into other tiara shapes ). Her daughters, who wore identical yellow outfits to the abdication, were again co-ordinated, this time coordinated in blue. Even Beatrix wore the correct shade of blue. Royalty with Ella has photos, including some of the wacky, not-to-be-missed outfits worn by lesser Dutch royals.

Even Camilla, duchess of Cornwall turned on the fashion jets, while Crown Princess Masako of Japan gets marks for just turning up (and not wearing a huge bow on her sleeve like another guest did).

UPDATE: Here’s the Daily Mail’s rather extensive fashion guide to what one wears to an investiture.

The Dutch are still celebrating their new king and taking a good look at the next generation. For the Netherlands now has the youngest heir in the world: nine-year-old Catharina-Amalia. 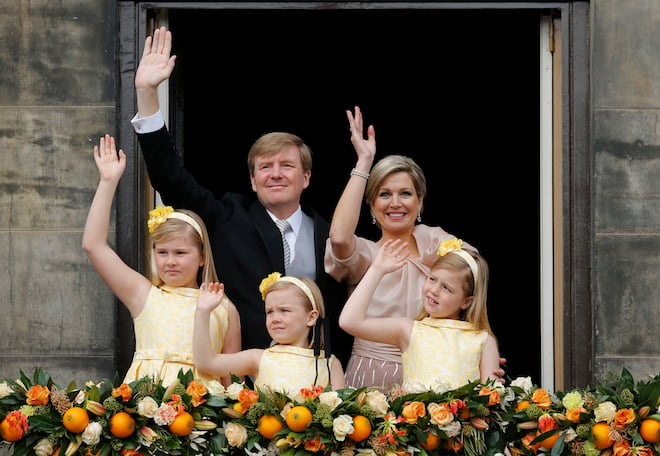 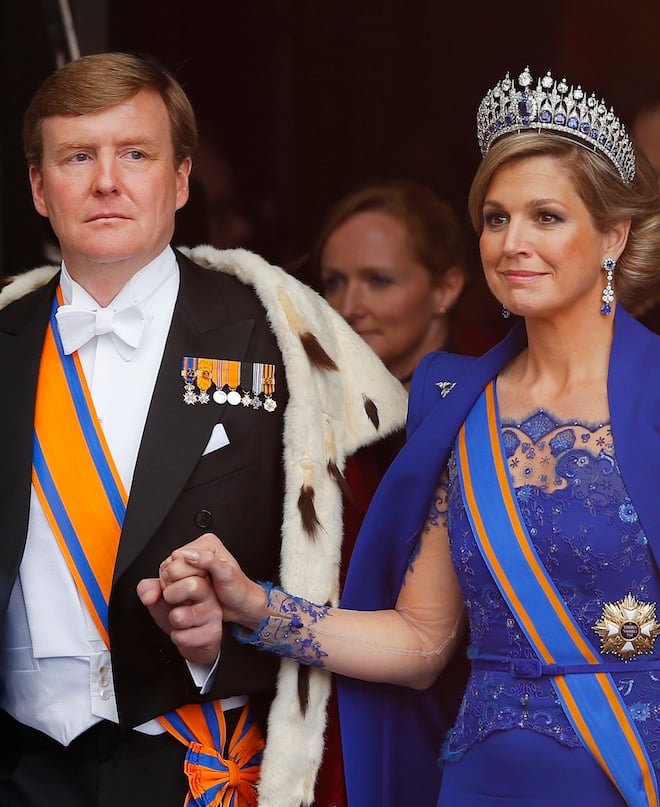