A year ago, the sprinters did not even know each other. Now, we're all watching their bromance 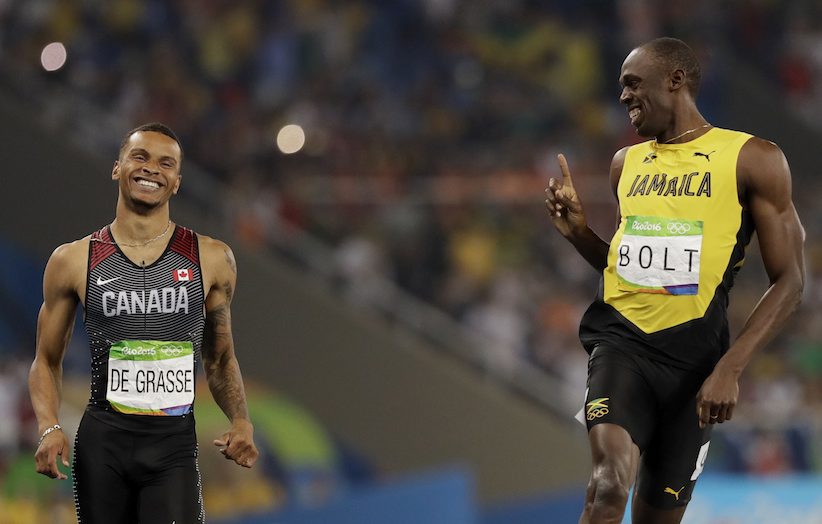 Never in history has a Canadian run the 200-m dash in 19.80 seconds—and never before has anyone cared so little about a new national record. How could they when Andre De Grasse and Jamaican Usain Bolt smiled so widely at one another while jogging the final few metres of their Olympic semi-final?

Just two dudes having a friendly chat while running a 19.78 200m pic.twitter.com/UKL5wCzIcL

The bromance is no secret, not after the world saw the high-fives and hugging between the two during Rio’s men’s 100-metre semi-finals and finals. On Wednesday evening, De Grasse pushed hard to try and beat Bolt at the 200-m finish line, though the Jamaican still edged him out by 0.02 seconds.

The bromance continues. All smiles between Bolt and De Grasse as they cross the finish line #DeBolt https://t.co/vtHo2cGKHv

Even Team USA’s number one Olympic fan—Leslie Jones (of Saturday Night Live and Ghostbusters fame), who’s been tweeting all things red, white and blue since the start of the Games—couldn’t help but love the playfulness between the two.

This made me smile! pic.twitter.com/0BGiWmcqoi

“DeBolt,” as their bromance nickname has been dubbed, didn’t even know each a year ago before they met at last year’s track and field World Championships, where De Grasse was a surprise bronze-medal winner in the men’s 100-m dash (losing out to Bolt, of course). One year later, they look like besties on the track.

“I don’t think he expected me to do that. He thought I was just going to give him the race,” De Grasse told the CBC after the race. “I had to push him a little bit to see what he has left in the tank.”

Expect more hugs and smiles after the final.