Almost a week later, organizers finally have a solution: dump it in the city sewers. 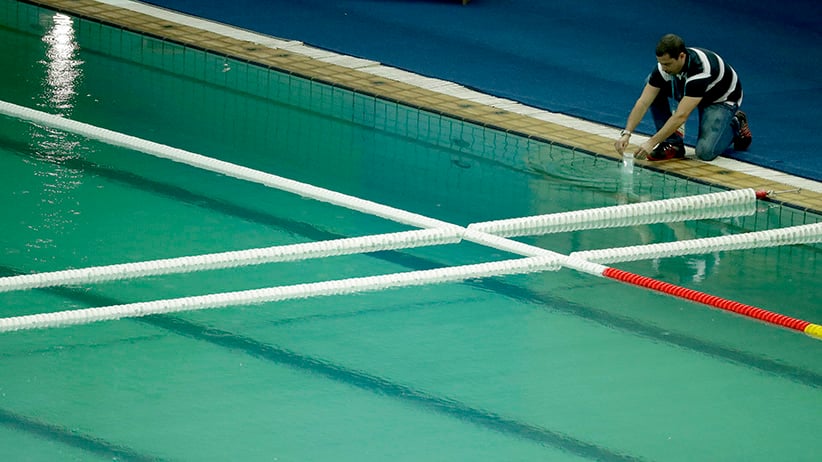 An inspector takes a sample from the water polo pool,which turned green at the Maria Lenk Aquatic Center. (Matt Dunham/AP)

Rio finally has a solution to remedy its green pool: drain the water and fill it up all over again. “The swamp,” as it’s been dubbed, has been the talk of the pool, weirding out Olympic divers and stinging the eyes of water polo players. How did it come to this? Here’s a brief timeline.

Day 2: Canadians just miss the podium in women’s 10-m synchro diving, but at least the water is a pristine blue.

Day 3: The men hold their 10-m synchro final. No one even thinks to mention the picturesque water. After all, it’s supposed to be blue.

We're at the diving to watch @TomDaley1994 in the 10m synchro final #Rio2016 pic.twitter.com/l4tKUYhTVx

Day 4: The transformation begins. Olympians (and pretty much everyone else) can’t help but notice.

Wait is someone playing a joke or are we celebrating St Patty's Day early here in Rio? #divingpond #Olympics pic.twitter.com/CsxxperHvM

What happened? At first a Rio spokesperson says it is “a proliferation of algae.” He jokes, “If it were green and yellow, we would know it was a patriotic thing.” All joking aside, the organizers tweet: “The water quality at the Maria Lenk Aquatics Centre was tested and there were no risks for the athletes.”  The organizing committee assures everyone the pool will soon be blue again.

Day 5: Not only is the diving pool still green, the water polo pool starts to change colour too.

Rainy day in Rio for the third day of men's #waterpolo and the water has a shade of green now. pic.twitter.com/oLr6PEjttU

But the mystery of the green pool is solved (again?), according to the sport’s organizing committee. “FINA can confirm that the reason for the unusual water colour observed during the Rio 2016 diving competitions is that the water tanks ran out some of the chemicals used in the water treatment process. As a result, the pH level of the water was outside the usual range, causing the discolouration.” Neither pool looks much better by the end of the day and water polo players complain of itchy, burning eyes.

8:30 p.m. in Rio: diving pool in the front, water polo in the back. Still quite green. #quitegreen pic.twitter.com/LhVvwWWZWQ

Day 7: After a full day with no diving events, divers are told they can’t practise in the pool Friday morning.

Not only does it look bad, one German diver complains about the scent: the venue smells like a fart. 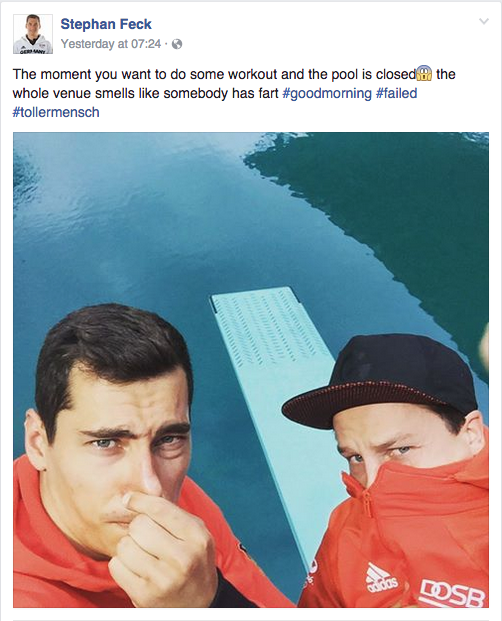 Flatulent odours aside, Rio officials say they’re struggling to get the water blue again because: “Chemistry is not an exact science.” (Actual quote.)

Day 8: Let’s just say they threw in the towel. A Rio official says one of their contractors mistakenly dumped 80 litres of hydrogen peroxide into the pool the day of the Opening Ceremonies, which neutralized the chlorine. (Science!) Meanwhile, the pool’s electronic monitoring system didn’t pick up that the chlorine wasn’t working anymore.

Rio says they will drain the nearly four million litres of water from the water polo pool and refill it overnight by pumping in water from a training pool—it’s blue—just in time for the synchronized swimming events. (Judges have to see underwater after all.) The divers, however, will have to live with green water.

As for Rio’s plans to dispose of the fart-smelling green water? They will reportedly pump it into city sewers.

Day 10 update: Divers couldn’t believe their eyes when they showed up to the pool on Monday morning.