Beer-drinking Scott Moir should be at all events, and other lessons from Pyeongchang 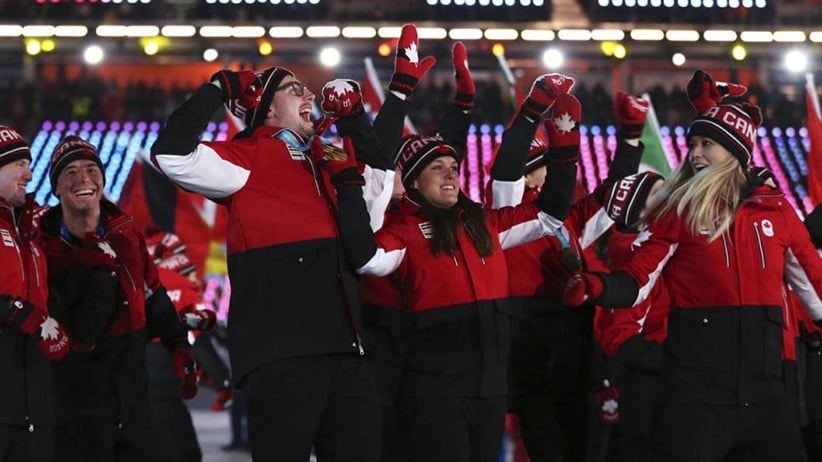 Team Canada walks into the stadium during the closing ceremony of the 2018 Winter Olympics in Pyeongchang, South Korea, Sunday, Feb. 25, 2018. (Natacha Pisarenko/AP)

The spectacle that is the Olympic Games is finished, and over the course of the last 16 days, Canada won a record 29 medals: 11 gold, 8 silver and 10 bronze. It betters the country’s previous best of 26, achieved in Vancouver in 2010. In honour of that historic medal haul, we compiled a list of 29 things we learned while covering the Winter Games in South Korea.

He won two gold medals in Pyeongchang, but arguably the ice dancer’s best performance came when he ripped the refs at the Canada-USA women’s hockey gold medal final. Moir, a true patriot who cheered on the men’s curling team that same day, should get a free ticket to everything where beer is served.

Mikael Kingsbury is the most accomplished freestyle skier ever, but he’d never won Olympic gold. It was the expectation for the guy who’s dominated moguls skiing like no one in history. Imagine the pressure that comes with that. But the 25-year-old delivered, and what a performance it was. Afterward, Kingsbury said: “I feel at peace with my sport now.”

The Canadian men’s hockey team could’ve been remembered as the misfits who lost to Germany for a shot at gold. Instead, they rallied and won bronze, and the players seemed legitimately happy. Side note: Hockey Canada, let your athletes talk. There’s no need to limit guys to two questions after they just won an Olympic medal, for Pete’s sake.

4. There can be beauty (and doubt and disappointment) in fourth

Not all finishes are created equal, and cross-country skier Alex Harvey’s fourth place in the 50-km mass start was one of the most spectacular moments of these Games. Have you seen that race? It’s ridiculous. It takes more than 2 hours. At the end of it, he sprinted to the finish line to edge a Norwegian for fourth, six seconds behind an OAR skier who won bronze. And yes, with Russians finishing 2-3, Harvey can’t help but have doubt in the back of his mind, considering the history of doping in that country. It’s a shame, too: That was the last Olympic race for one of the best cross-country skiers in the world.

Aside from the home town crowd, OAR had the best cheering section of any team here. We wish we could say country, but they’re not a country at these Games, so… And that’s probably why they were so spirited! You should have seen them at the Canada-Russia women’s semifinal hockey game, sitting there in their shirts that spelled out “RUSSIA HOCKEY” and “#RUSSIAINMYHEART.” They had pom-poms and semi-choreographed dances. They really didn’t embrace the whole OAR thing while cheering, though. To be fair, “Olympic Athletes of Russia!” doesn’t have the same ring as “Russ-I-A!” 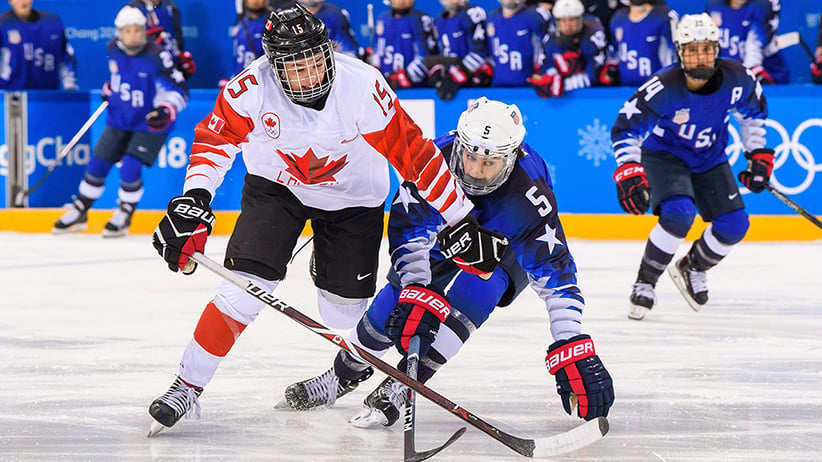 For the second straight Winter Games, the final between Canada and the U.S. was the game of the Games. A 2-2 tie, then 4-on-4 overtime before it went to a shootout. Whether you agree or not with the way it ended (you probably don’t, because Canada lost in that shootout), it was “a battle for the ages,” as veteran Canadian forward Brianne Jenner promised it would be.

READ: How social media impacts athletes at the Olympics

Goes to Jocelyne Lamoureux-Davidson, the Team USA star forward who won the gold medal game on a dangle she calls: “Oops, I did it again.” Britney should be proud.

This is a regular order at a hockey game, usually placed by two or three Canadians, because there are no limits on how many beers one human can order here. And the best part: A beer here will run you around $5 CAD. It’s basically free.

9. You don’t want to be a North Korean cheerleader

10. The most shocking thing you’ll find roaming around the DMZ

11. The least shocking thing that happened at these Olympics

Two Russians tested positive for doping before the Games were over.

The host country has won more medals in short track than all other winter sports combined, and they take it seriously—too seriously, sometimes. Canada’s Kim Boutin found that out after she was upgraded to bronze in the 500-metre race, since South Korea’s Choi Min-jeong was disqualified. Boutin received vile messages on social media. One fan told her, “If I find you, you will die.”

But happier times followed for Boutin, thankfully. One of the best things about the Olympics is the breakout star it seems to create every Games, and for Canada, that was the 23-year-old from Sherbrook, Que. Boutin was the first Canadian female short track skater to win three individual medals in one Games. She stole the show and was named Canada’s flag bearer for the closing ceremony.

After becoming the 2nd woman to win medals in all 3 individual short track #speedskating events at the #Olympics, Boutin will lead out of its most successful Winter Games: https://t.co/4lRG9moDxx#PyeongChang2018 pic.twitter.com/VHZhCoHJI1

The American figure skater was the best interview of these Games—you should’ve seen him holding court with reporters here, making even the most tired and salty of them smile, even laugh. “I am America’s sweetheart,” he said. And he is.

15. The biggest star here should be…

Ester Ledecka, and it’s not even competitive. The Czech snowboarder and skier was a big story here, sure, but she should be on billboards and sponsored by everyone and her face should be on all the cereal boxes. Ledecka won gold on skis in the super-G (she looked surprised), and then she won gold on her snowboard in the parallel GS, which is her actual event. Nobody had ever done that before. Unreal.

16. The obsession with Shaun White is ridiculous

It’s boy band level, cry and scream even though you’re 30 and hug him and get a selifie and make him autograph your Bristol board. Why do you have a Bristol board, ma’am? Anyway, White was the biggest star here, fans waiting for more than an hour in the cold just to touch his face. White is so good at being a celebrity, maybe too good. He was the Usain Bolt of these Games. From a Canadian standpoint, the biggest stars here were Tessa and Scott, who don’t even need last names. And stop asking about their relationship status, because they swear they’re friends and who they’re dating ain’t none of your business.

Chloe Kim, the 17-year-old American who won snowboarding half pipe gold. Part-way through the competition, Kim tweeted that she wanted ice cream. Cool as a cucumber. After she won, she said: “My dad didn’t cry, which I don’t get at all, like ‘What are you doing?’ My mom cried, my sister was bawling her eyes out on my hair and I was just like, ‘Please stop.’” More Chloe Kim, please.

Could be down for some ice cream rn

18. Best bronze of the Games goes to…

Alex Gough, who’s been blazing trails in luge in this country from the get-go. After two fourth place finishes four years ago, Gough earned bronze in the women’s race, and then added a silver in the team event. Those rewards are a long time coming for the Calgarian.

20. Performance of the Games

Pita Taufatofua, take a bow. Just when you thought Bermuda won best dressed at the opening ceremony because of their Bermuda shorts (they even walked in a triangle), out came the Tonga flag bearer: Shirtless, oiled up, wearing flip flops and a skirt, while everyone shivered and froze in the stands. Total boss. Instant legend.

21. Canada earns more hardware than the Americans, but…

Silver in women’s hockey, bronze in men’s. And the only Canadian curling medal came from the new event, mixed doubles. What?! Take deep breaths, this isn’t a crisis. Focus on and embrace sports Canada is good at, like luge.

This country was already well aware, but Mr. T spread the word worldwide, and he even called up skip John Shuster to wish the Americans luck in the gold medal game. It worked, because they won. As T told Time, it’s a beautiful sport to watch: “They remind me of ballet dancers.”

24. World class apologists…but do we mean it?

Canadians may have set the record for apologies at an Olympics. First, there was the Clue-like incident in the cafeteria before the Olympics started that may have involved a Canadian and definitely involved a Russian, and some unkind things were said by the (maybe) Canadian, probably about doping. As COC officials explained it, they had no idea what happened, but Canada apologized to OAR anyway. Because… Canada. Then, hockey player Jocelyne Larocque issued an apology statement after immediately removing her silver medal when Canada lost to the U.S. in the women’s hockey final. Did she really need to apologize, though?

Ski cross racer Dave Duncan and his wife Maja and Willy Raine, Alpine Canada’s athletic director for the sport, were arrested after they stole a pink Hummer and Raine drove it, while drunk. Really, really stupid. Then came the only very necessary Canadian apology.

26. The emotion that comes with one shot every four years is unreal

So many teary, emotion-filled moments. Ted Jan-Bloemen crying as he realized he’d won speed skating’s 10,000-metres, while one of his rivals—Sven Kramer, the best ever—was still skating. Canadian captain Marie-Philip Poulin, tears in her eyes, consoling each of her teammates after he team lost in the gold medal game for the first time in 20 years. Curler Marc Kennedy dropping an F-bomb, Mark McMorris dropping an F-Bomb, after big losses. Kelsey Serwa and her best pal Brittany Phelan finishing one-two in women’s ski cross and the hugs and the family time. There’s nothing like this once-every-four-year stage when it comes to eliciting raw emotion.

27. Great things we found in Korea

Beer served in measuring cups (great handles, spouts), all the barbecue you can eat, seat benches that open up for coat storage, drawers in the table for cutlery storage, a mini version of a ski lift at a bar (mesmerizing), heated toilet seats. (The worst thing we found here: “Grilled sausages” in venues, which are actually boiled and/or microwaved hotdogs).

28. Journalists set up to fail

It’s clear the organizing committee wants us to do a horrible job, because they put a 24-hour tent in the media village that serves beer and Soju, the latter of which tastes kind of like juice but acts different because it steals memories and physical and mental abilities. They serve this stuff at all hours. A popular move among some members of the Canadian media is called The Wraparound, which involves drinking in that tent all night until breakfast is served at 5 a.m., conveniently right there in that same tent. You barely have to move. You pound breakfast at 5 a.m., you nap, then you wake up and work hard and well and efficiently.