Canadian underdogs win relay bronze: 'We all believed it possible'

Canada's won four medals in the pool already, and could rack up even more. The world is watching.

In the last four Summer Games, Canada won a total of four medals in the Olympic pool. In just five days in Rio, Canada’s women have equalled that mark, and now seem destined to surpass it—with or without the help of the men.

On Thursday night, it was yet another bronze—this time in the 4 x 200-m freestyle relay. Anchored by their 16-year-old Toronto phenom, Penny Oleksiak, the squad churned to a Canadian record time of 7:45.39, behind the gold-winning Americans at 7:43.03 and the Aussies, who grabbed silver with a 7:44.87 swim.

MORE: The Amazing Penny Oleksiak: ‘I just tried to hold on’

Earlier in the evening, Oleksiak turned in the second-fastest swim in the semifinals of the 100-m freestyle, guaranteeing herself another shot at the podium Thursday night. Her time of 52.72 was just 1/100th of a second behind the first-place qualifier and world-record-holder, Cate Campbell of Australia. And it was the eighth-fastest women’s 100-free time ever.

“When we saw Penny’s semifinal, how she came back with an incredible time, and what she is capable of doing, we said, ‘Wow, we can be in this game for real,’ ” explained Katerine Savard, 23, of Montreal, who swam the first leg for Canada. “We knew we had a chance.”

Success is indeed proving contagious for Canada at the pool. The relay bronze is the third medal of the Games for Oleksiak, who won silver in the 100-m butterfly Sunday, and kicked off the Games Saturday as part of the bronze-winning 4 x 100-m freestyle relay team. And she still has the 100-m freestyle to go.

RELATED: The Young and the Fast: Canada wins first relay bronze in Rio

Taylor Ruck, also 16, won her second relay bronze. “This time it was even better,” she said after the medal ceremony. “The atmosphere was really fun. And when we came out, we were just joking around with each other.” Ruck’s second leg was the turning point for the squad, as she pulled Canada from sixth place to third over her 200 m.

It’s already clear that Oleksiak and Ruck—the first two medal-winning athletes to be born in the 2000s, the IOC confirmed—are pushing their older, more experienced teammates to unimagined heights. Before the first relay victory, it had been 20 years since a Canadian woman had medalled in swimming at the Olympics.

“We were kind of the underdogs, and that’s the best place to be. No one was expecting us to medal, but we all believed it was possible,” said Brittany MacLean, the 22-year-old Torontonian who swam the third leg and kept the team in a podium position. “We knew if we put ourselves in a [good] position before Penny dove in that anything would be possible. She’s been closing so incredibly.” 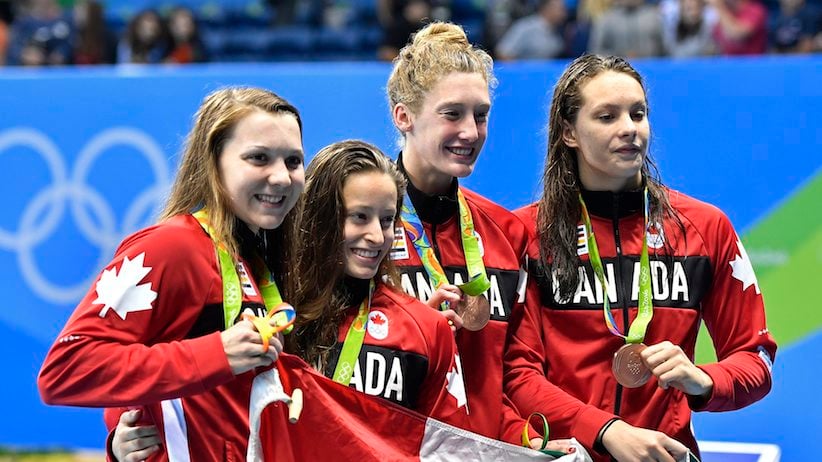 “Before the race, we were in the ready room saying, ‘Who wants to get an Olympic medal tonight?’ And we were all obviously onboard.”

Emily Overholt of Vancouver, and Kennedy Goss of Toronto, who swam the afternoon heats for the relay, but not the finals will also receive bronze medals.

Canada’s men have yet to medal at the pool—or anywhere else in Rio. But Santo Condorelli came achingly close Wednesday in the 100-m freestyle, finishing fourth in a time of 47.88, just .03 seconds off the podium. He didn’t seem too fussed about missing out. “Nothing in my life would change,” he told Sportsnet. “Still going back to school. Still going to compete.” The 21-year-old will swim heats in both the 50-m freestyle and 100-m butterfly today.

Whatever the final outcome, Canada’s swim program is back and making waves at the Summer Games.

Kierra Smith, who advanced to Thursday’s final in the 200-m breaststroke, proudly shared a story from the Athletes Village.

“Missy Franklin sat down with us at dinner the other night and said, ‘You guys are doing so great.’ ” Smith, 22, admitted to being a bit star-struck by the American who won four golds in London, as a precocious 17-year-old. “I was like, it’s Missy Franklin! I was so excited. She noticed us!”

Her, and the rest of the world.