Drouin capped a long winning streak with the ultimate win: an Olympic gold medal that eluded him four years ago in London

Derek Drouin knew that the medal was his before the competition ever began. It was a feeling that swept over him two or three days before the Rio Olympics high jump even got underway. A sense of comfort that quickly became a certitude—he was going to jump his very best when it counted and bring home the gold.

“I wasn’t nervous at all. I wasn’t anxious at all,” he says. “I was just so excited to get out there. I was confident in my preparations and I just love the Olympics.

“I was coming out here to win gold, I would have been disappointed with anything less.”

And on a magic night at Rio’s Olympic Stadium the prophesy came true. The 26-year-old* from Corunna, Ont., cleared every jump he attempted on his very first try. By 2.33m, he was leading the 10 competitors who were left in the 15-man final. At 2.36m, he stood first among six. And then came 2.38m and another graceful arch over the bar that guaranteed him a spot on the podium, as the power chords of The Clash’s Should I Stay or Should I Go, echoed through the stadium.

Mutaz Essa Barshim of Qatar made three attempts at the same height and failed, guaranteeing Drouin at least a silver. Then the only other remaining competitor, Bohdan Bondarenko of Ukraine, down to his final try, elected to push the bar to 2.40m. He made his approach run, but pulled up. With the seconds ticking down, Bondarenko made one last leap—and failed.

Drouin is famed for his ability to block out distractions. But in Rio, he reached new heights. With the small but enthusiastic crowd cheering him on, he blocked out the noise and his emotions and made his own attempt at 2.4m, which would have set a new Olympic record.

“I knew it was going to be tough, but I really just wanted to give it a shot,” he said afterwards. “I had a flood of emotions and tried to get rid of them really quickly.”

The bar teetered and fell, and he rose from the mat and thrust his arms in the air. Then he let the judges know he was done for the evening, and the celebrations began. 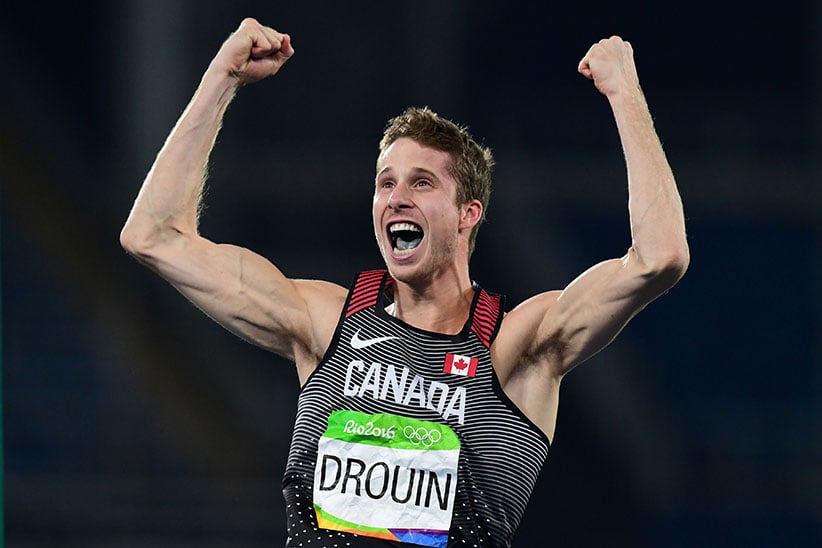 Jeff Huntoon, who helped recruit Drouin out of high school in Sarnia, coached him to five NCAA high-jump titles at Indiana University, and now works for Athletics Canada, paid tribute to his charge for keeping his focus through an up-and-down season. After a slow start and some nagging injuries, they pulled Drouin back from competitions like Europe’s lucrative Diamond League to instead focus on rehabilitation and the ultimate goal—an Olympic title. “When you don’t do it for money, this is what happens,” said Huntoon. “You put out good performances. You may not win every time, but you’ll be ready in a situation like this.”

Drouin has been in the zone for his last three competitions, said his coach, clearing every height on his first try until he emerged the victor. His careful preparation, consistent approach to every jump and eerie focus makes him a jumping machine, said Huntoon. “He’s just got a wonderful demeanour about him. He can just zone everything out.

“It may look boring to some, but it’s awfully damn exciting tonight.”

At the 2012 London Games, Drouin won an unexpected—at least by most everyone else—bronze, becoming the first Canadian high jumper to make the Olympic podium since Greg Joy won a home silver in 1976. Just 22 years old and competing in his first Games, Drouin put in a solid performance, battling wet and windy conditions to stay in the top five, eventually finishing in a three-way tie for third with Robert Grabarz of Britain and Barsham, the Qatari. Their shared height of 2.29 was good enough for a medal, but perhaps not bragging rights.

“I wasn’t particularly proud of the height that I jumped in London. I was obviously happy with the way that I competed and that I was able to get out there and get on the podium, but I’m not ignorant to the fact that that was a terrible height to win an Olympic medal,” Drouin told Maclean’s last winter. “So I felt like it was easy for a lot of people to think, ‘Well, he only medaled because the competition was so bad.’ So I felt like, for a while after that, that I had to prove that it wasn’t just a fluke. The other guys on the podium all had bigger names than I did.”

Perhaps that helps explain his extraordinary post-Olympic run. Drouin won a world championship bronze in 2013, then gold at the Commonwealth Games in Glasgow in 2014, and again at the Pan Ams last summer in Toronto. Then he capped it off with a world championship last August in Russia. All that was missing from his resume was the Olympic title.

If there was a sour note in Drouin’s triumphant evening, it was the incredibly sparse crowd at Rio’s Olympic Stadium. (Although they did manage loud cheers when Thiago Da Silva was awarded the gold pole vault medal on Monday night, and vociferous boos for Renaud Lavillenie of France who came second. The Frenchman cried as he stood on the podium’s second level, and it wasn’t from joy.)

But even though there were few to applaud Drouin as he circled the track draped in a Canadian flag, he was happy.

“Four years ago I was very very relieved, I just didn’t think it was my best day,” he said. “Today things went well, I’m happy with the result, I’m proud of the way I jumped.”

It all turned out just the way he sensed. Derek Drouin has cleared the highest bar.