Hilary Caldwell makes it so with bronze at Rio Olympics

Swimmer from Victoria admits she would have liked gold. Still ... 'It's crazy, it's great.' 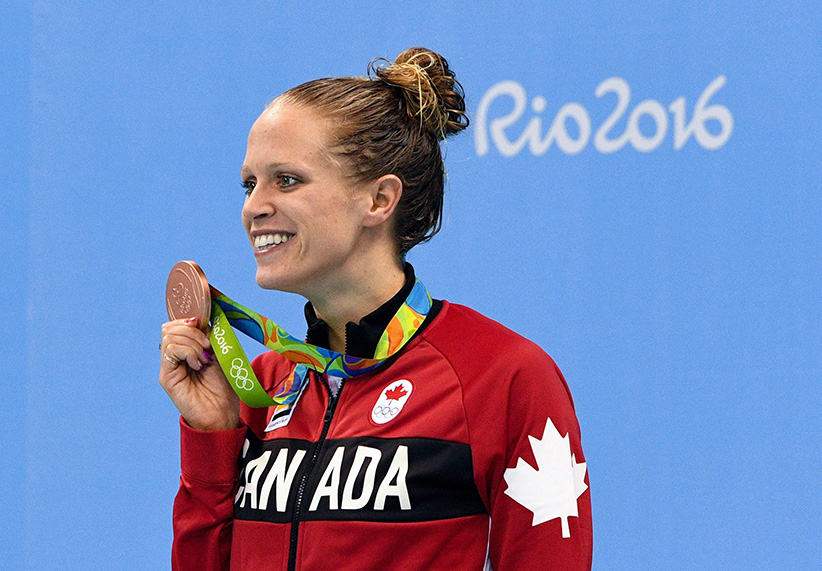 Hilary Caldwell glanced up at the scoreboard at the Rio Olympic Aquatics Stadium and frowned. Which was odd given she had just won a bronze in the women’s 200-m backstroke, handing Canada its 10th medal of the 2016 Summer Games.

“I looked up and I saw the lights on the blocks, so I knew I was third. I was happy, but I did want the gold medal.” she explained. “And I saw the time and I think I gave a little scowl.”

The 25-year-old from Victoria touched the wall at 2:07.54, four-tenths of a second slower than she swam the semifinal, Thursday night, and well behind her Canadian record of 2:06.08. But even if she had clocked a new personal best, it wouldn’t have been difficult to move up the Rio podium. Maya Dirado of the United States won the gold with a time of 2:05.99, and Katinka Hosszu was just .07 seconds behind for the silver.

“I wanted to be faster personally, but in the end it’s about the race,” said Caldwell. “A podium is what I said I wanted coming in here and I’m pretty amazed and pleased with that.”

It’s a measure of how far Canada has come during the past seven days that anyone can be disappointed with a bronze. The swim squad’s six medals—all from the women—are the most the country has won at an Olympic meet since 1984, the L.A. boycott Games. And it’s two more than Team Canada won in Athens, London, and Beijing combined.

Caldwell did find some perspective on her accomplishment and those of her teammates. “It’s been so cool to see how great we’re swimming,” she said. “We’ve got to have almost the same amount of medals as Australia, which is outrageous. We’re one of the top female teams here. I can’t believe it. It’s crazy. It’s great.”

For the record, Australia, one of the world’s top swimming nations had eight medals total as of Friday night, but only four of them were from women. Overall, Canada is tied with China for the fifth most swimming medals in Rio, and only the mighty United States has more female medalists.

The bronze caps a turbulent couple of years for Caldwell, whose longtime coach Randy Bennett died in April 2015. The “most inked member of the national swim team,” as she is billed in the Swimming Canada media guide, got her seventh tattoo in his honour: one of his catch-phrases, “Make It So,” inscribed on the back of her arm.

Caldwell was asked if there more ink in her future, now that she has Olympic medal to celebrate. “Probably,” she laughed. “There’s a few things I’ve been musing about.”