Why Simone Manuel's gold-medal swim in Rio was so historic

Manuel overcame a fraught history between Black people and water, which ripples across nations 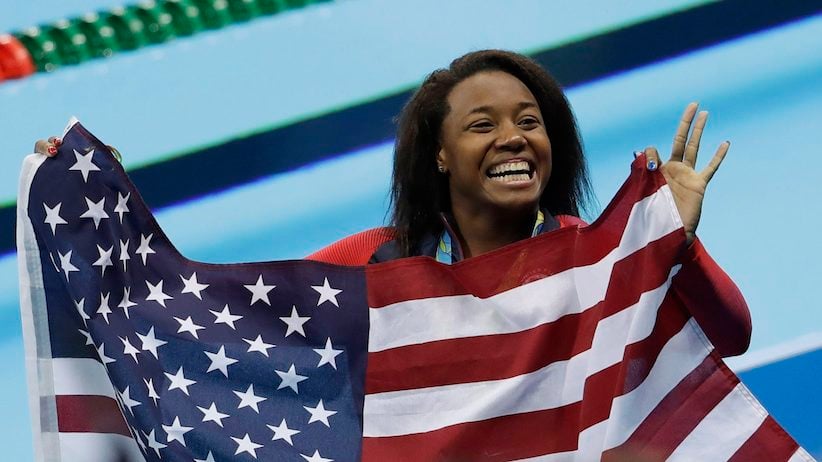 When the starting signal went off last Thursday night, the world held its breath. The much-anticipated women’s 100-m race concluded in shocking fashion, with Canadian swimmer Penny Oleksiak and her American competitor Simone Manuel touching the wall at precisely the same moment. At 16, Oleksiak is Canada’s youngest-ever Olympic champion, its most decorated athlete of the Summer Games, and the first among Canada’s athletes to claim gold in Rio. At 20, Manuel is the first Black woman in history to win a gold medal in individual swimming, and the first African American to win an individual swimming medal at all. Both women, of course, put forth an heroic effort and a superb finish for their respective flags. But something else was overcome when Simone Manuel tearfully claimed her gold medal: a fraught history between Black people and water, which ripples across nations.

In post-First World War America, and for several decades afterwards, swimming pools were the tip of segregation’s wedge. The myths of disease and uncleanliness fuelled the belief that Black Americans were to be kept away from swimming pools, and other bodies of water, for white safety. In 1953, Dorothy Dandridge dipped her toe in the water of Hotel Last Frontier, in Las Vegas, where she had performed for two weeks. The hotel drained the pool, and it was scrubbed by Black employees; the labour of their bodies cleansing the pestilence her own body mingled with the water. Sammy Davis Jr. once took a dip in the pool at the New Frontier hotel, to the same effect.

In 1954, federal judge Roszel Thomsen upheld the segregation of public pools, even after the Supreme Court decision on Brown v. Topeka Board of Education integrated American schools. Roszel’s rationale was that, due to the “physical and intimate contact” inherent to swimming pools, they were “more sensitive than schools.” In 1964, Black and white protesters jumped into the Monson Motor Lodge pool, integrating it in solidarity. The Monson’s owner, James Brock, attempted to force them out by dumping muriatic acid into the water. When that failed, police were called and the protesters dragged out. In later years, when public pools finally were integrated, the private pool industry boomed. White Americans dug out their backyards and the common spaces of gated communities, moving the waters behind fences and guard houses. Meanwhile, municipal pools were allowed to languish for lack of city funding.

As writer Brentin Mock detailed for Grist in 2014, the inability of Black children to swim in pools and clean, safe beaches helped contribute to a widespread loss of culture, and life. Seventy per cent of Black children in America are unable to swim well, if at all. They are also nearly three times as likely to drown as white children. By denying generations of Black children safe access to water that their white peers enjoyed, pools and waterways became death traps.

Black Americans are far from the only Black people who have had this experience in their local waters. In Canada, of course, we don’t keep such statistics. But the U.K. does, and more than half of Black Britons cannot swim. The reasons are similar: lack of access to neighbourhood pools, and white anxiety about sharing space with Black swimmers in semi-nudity. In the Bahamas, a filmmaker documented American instructors coaxing local children out of a generations-held fear of the open water. Their delight at learning to swim was more than a victory over economic conditions, it was defiance of established social hierarchy.

Before moving to Canada in the 1970s, my family lived in a sleepy oceanside town in Jamaica called Port Antonio. In their time, it was a town segregated in all but name. The locals, mostly Black people with a smattering of ethnic Chinese Jamaicans, worked the docks, the arable land, and the hotels. Tourists, on the other hand, flocked to the lush hotels as guests, and spent their days at swimming destinations like San San Beach and the Blue Lagoon. Port Antonio was a favoured celebrity haunt, having hosted Ian Fleming, Errol Flynn, and Queen Elizabeth II herself.

Flynn once called Port Antonio “more beautiful than any woman I have ever met.” He purchased a large parcel of land abutting my family’s property, staying there until he died. Due to class and racial privilege, Flynn and his peers saw parts of Port Antonio that were off-limits to my family and their neighbours until fairly recently. But even for middle-class white families on vacation, sharing the space with Black and Asian locals was unthinkable.

I spoke with my mother after Manuel and Oleksiak won their gold medals. Given her past experience, she was immensely proud that Manuel, a Black girl with straightened hair and dark skin, stood on that podium. It means something the year after Officer Eric Casebolt threw 15-year-old Dajerria Becton by her hair, for the crime of talking back to a white woman at a neighbourhood pool in Texas. It means something for a people whose children were told their bodies are too dense, their skin too dirty, and their hair too brittle to belong in the water.

It means something for those of us whose ancestral relatives are entombed at the bottom of the Atlantic Ocean.

In 52.70 seconds, Penny Oleksiak and Simone Manuel not only broke an Olympic record, but shattered ceilings together. Both deserve every bit of praise they get. But we should take note of the cultural obstacles Simone Manuel had to overcome to reach that finish line. A hundred metres in distance seems so much farther when anchored by almost a hundred years of segregation.