So how did that oiled-up Tonga flag bearer do in Rio? 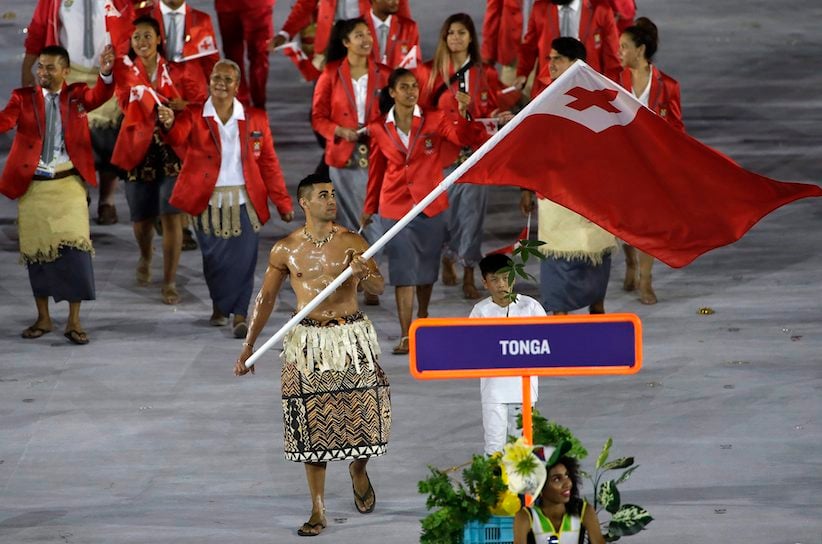 Few would recognize Pita Taufatofua in his taekwondo uniform. The helmet he wears during competition covers too much of his hair, his gloves too much of the hands that recently held his country’s flag up high. And the chest protector leaves little to the imagination of the abs and pectoral muscles underneath.

Taufatofua, Tonga’s opening ceremony flag bearer, is better remembered for wearing a decorated tapa cloth and belt—called a ngatu and a kafa, respectively—and a whole lot of coconut oil. Many viewers at home fell in love with his figure, and he even scored a guest appearance on NBC’s Today show. But he’s  an athlete—an Olympian, no less—not a model.

So how, exactly, did he fare? Well… not great.

In the 80-kg weight class, Taufatofua is ranked No. 157 in the world; his first-round opponent, Iran’s Sajjad Mardani, is ranked No. 2. The match pretty much went as the rankings mismatch might have suggested.

Twenty-one seconds into the match, Taufatofua was losing 3-0 on points. “Nine-nil before I even started throwing kicks,” he told Sports Illustrated after the match. “I thought, ‘What am I doing?’” So he started throwing some kicks—the tae in taekwondo. He even managed to score a point: “The happiest point I’ve ever had,” he told the Wall Street Journal.

But Taufatofua’s sport also has a mercy rule (the official term is a “point gap”) where the match ends if an opponent leads by 12 points or more. And less than a minute into the second round (of three rounds), the score stood at 16-1.

Felt soo privileged to get out on those mats and represent Tonga! There are no excuses, I started slow, got caught and lost to a legend of Taekwondo, a great opponent in Iran. Sometimes you win, sometimes you learn! It took me 20 years to get here, if it takes another 20 we will bring that Gold home! Thank you for the love, prayers and support without you all we would not be here! Malo Aupito, ofa atu Ps- We aren't finished yet ;) #closingCeremony #tongaToTheWorld #brazil #tonga

But winning isn’t everything, especially when Taufatofua can say he competed on the world’s biggest stage. “The truth isn’t glamorous, it isn’t shiny,” he wrote on Facebook earlier this week. “The truth is that I have had more injuries than I can count, that I have lost more matches than I have won, that I have gone through massive financial hardship and lost very close relationships in pursuit of the dream.”

He added: “Today I got to walk out on the Olympic mats, the mats that I will in a few days be fighting on. What an honour, what a privilege to be here.”

And even after his blowout loss, his Olympic Games aren’t over just yet. There’s still the Closing Ceremony.