2018 will be the year of the polarized church 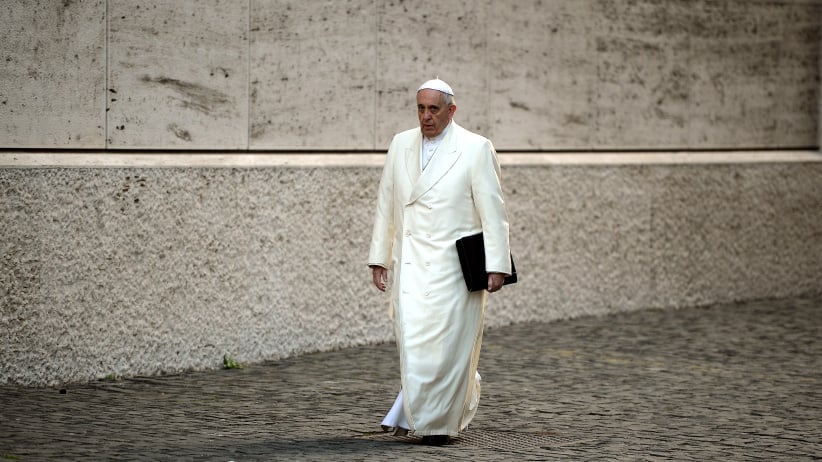 Pope Francis arrives for the Papal consistory before the nominations of new cardinals at the Vatican on February 13, 2015. (Filippo Monteforte/AFP/Getty Images)

One of the great myths about the Roman Catholic Church is that it is a single body, unified in faith and happily devout under direct guidance of the Holy Father—but that’s hardly the reality.

While Catholic theology considers the Pope to be the direct successor of St. Peter, given the keys of the kingdom by Jesus Himself, the church has always contained dissidents. And since the early 1960s, it has been acutely divided between conservatives and liberals—a rift that’s grown deeper ever since the 2013 election of Pope Francis, the most reform-driven Pope in living memory and, after, the reigns of John Paul II and Benedict XVI, who were both adored by the Catholic right, the most polarizing.

With a decision on a particularly divisive papal text looming, there is a chance that 2018 causes the Catholic Church to come apart along those simmering seams. It won’t be a formal separation—but it will certainly feel like one.

READ: The Reformation at 500: Grappling with Martin Luther’s anti-Semitic legacy

Critics of the Argentinian pontiff offer a litany of complaints: he is far too negative about Donald Trump; he embraces an abundance of progressive causes; during recent celebrations of the 500th anniversary of the Reformation, he’s praised Martin Luther, who the right blame for splitting the church in the past; and he promotes what they see as “pro-homosexual” priests in the Vatican. They argue that his desire to “make a mess,” as he himself put it, means that he’s indifferent to liturgy, and his commitment to climate change and his relative silence over issues of abortion and traditional marriage means he has betrayed his position. The more extreme even claim that he’s lost legitimacy. The throne, they say, is empty.

The last holy straw could be coming in the form of a document entitled Amoris Laetitia, or “The Joy of Love,” issued in April 2016 by the Vatican. This booklet seems to many outside of the Church to be absurdly esoteric, overwhelmingly obvious and even irrelevant. Within Catholicism, however, it is explosive. As with most Papal texts, it’s long, dense, and open to various interpretations, but its most controversial element is that it allows Holy Communion to be given to couples who are divorced and have been remarried in a civil union.

Its meaning is layered in context, it is not rigid in its demands, and it calls for gentleness and for cases to be considered individually. But even so, it has sent countless traditional Catholics into paroxysms of rage. One group of scholars and priests sent an official appeal to petition the Pope to “repudiate” these “erroneous positions,” and thousands of clergy have asked for “clarification”—the most severe criticism they can muster. That clarification is expected in 2018.

“Many faithful Catholics believe that with Amoris Laetitia, Pope Francis has encouraged beliefs and practices that are incompatible with the prior teachings of the Church,” wrote Phil Lawler, the founder of Catholic World News—a conservative, but by no means the angriest of the righteous. “If that complaint is accurate, [Pope Francis] has violated the sacred trust that is given to him.”

It’s unlikely that Francis, now 81 and admitting to bouts with poor health, will retreat on Amoris Laetitia, and it may well be that he will open up even more discussion about the ordination of women as deacons—a position below that of priest but exclusively male at the moment—and call for more dialogue with the LGBTQ community. We don’t know all of the details but he has, for example, indicated that the all-important debate over married clergy may well be reopened. That will further provoke his critics, and many observers believe that to be one of the main reasons he will proceed. He may be the Pope, but he’s a fighter and someone who doesn’t suffer reactionaries lightly. He will want to open as many doors and windows as he can, before it’s too late.

Some of Francis’s critics have left the church for Eastern Orthodoxy, and more still for one of the far-right Catholic splinter groups. One of his most high-profile opponents, American Cardinal Raymond Burke, has become more powerful and popular as the criticism builds.

But most are waiting to see what happens in 2018, especially those Catholic neocons in the United States and Canada who have spent decades in comfortable power in various journals, universities, and seminaries. The divide is ugly, and terribly lacking in Christian charity. But then again, there is none so venomous as a fundamentalist scorned. Whatever happens, 2018 will be a year for Catholics living dangerously.

MORE ABOUT THE CATHOLIC CHURCH: