Scott Gilmore: The pandemic isn’t suddenly going away, Trump will still be around and the decline of American democracy will continue. Happy New Year! 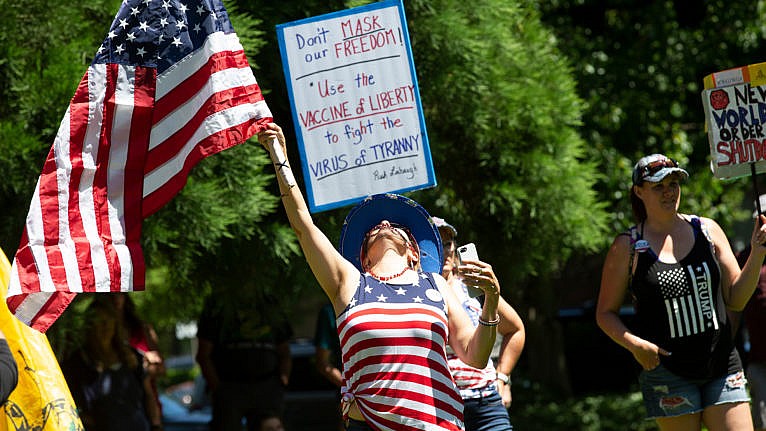 Once out of office, Trump will continue to fuel rage with lies and self-serving accusations (Karen Ducey/Getty Images)

My favourite poet is T.S. Eliot, mostly because I never took second-year English and he was about as far as I got in the canon. Regardless, Eliot wrote in his poem “Little Gidding” that “to make an end was to make a beginning”—a line that is most often repeated right around now because it captures the hope that a new year will usher in fresh and better tidings.

Alas, like a lot of poetry, this is mostly nonsense. The only thing likely to change as we march into January is your wall calendar. This is obvious when you consider the only reason we even mark Jan. 1 as the beginning of a new year is because some Etruscan priest decided this was as good a time as any to celebrate Janus, the god of doorways and beginnings. Twenty-five centuries later we’re tracking our New Year’s resolutions on our iPhones and promising ourselves that 2021 is going to be different!

But, it won’t be. The new year is going to look very, very similar to the old one in ways both great and small.

READ: If anything will save us from the plight of 2020, it’s empathy

To begin with, the pandemic isn’t suddenly going away. The vaccine is here, but distribution will take time. What’s worse, a shockingly large number of you don’t trust this vaccine, science in general or objective reality. You will refuse to get inoculated; you may also criminally drag your children along into your benighted cave; and you will ensure that thousands more will needlessly die before this is all over. Thank you for that.

Even after the pandemic is gone, the impact of the virus will linger for a very long time. The world has experienced the biggest economic downturn since the Great Depression, and while markets are up, high levels of unemployment will continue to plague us into 2021. Many of the small businesses that closed will not be coming back, as Amazon and other online megafauna continue to dominate the ecosystem, and as some customers permanently adopt their pandemic habits of shopping on the web or realize they don’t actually miss going to the movies.

There will also be ongoing social impacts. Don’t expect a sudden frenzy of hugging and hand shaking. The instinct to keep six feet from everyone will last well into 2021 and possibly beyond. Like Asia, we may even see face masks become a common accoutrement long after this specific virus is gone.

READ: What’s in store for a post-Trump America? An Idaho town may have the answer.

The year ahead will also continue to include large and unhealthy doses of Donald Trump. He will leave the White House on Jan. 20, possibly even under escort, but he will remain one of the most important political actors in the United States, and consequently the world. He will continue to hold rallies, where he will make headlines with outrageous accusations and self-serving lies. Trump will probably start charging admission and will most certainly set up a super PAC that will attract millions in donations. This money will then be used to primary Republicans who are not sufficiently loyal to him and his campaign for re-election in 2024. The Republican party will not be escaping his influence this year, nor in the years to come.

And, as Trump did with birtherism prior to entering politics, he will spend the year ahead whipping up his supporters to believe the Democratic president is illegitimate and that the election was stolen. Already, 80 per cent of Trump voters believe Joe Biden was illegally elected. This myth will only grow in popularity and will almost inevitably become a rallying cry for a generation of right-wing Americans, enraged at how they were victimized, and convinced that the Democrats are the enemy. So in spite of the incoming president’s sincere efforts to reach across the aisle, in 2021 America’s partisan divide will remain and likely worsen.

Because of this, the decline of American democracy will continue apace. The new year will not usher in an era of political reform and a civic renaissance. The political polarization will continue the legislative gridlock, hampering any efforts by President Biden to address voter suppression, gerrymandering or electoral reform. The politicians most responsible for the Republican party’s anti-democratic tendencies, men like Mitch McConnell, Lindsey Graham, Ted Cruz and Devin Nunes, were all re-elected. They will continue to dance to Trump’s tune, or more accurately, mimic the gyrations of his captivated base.

Not coincidentally, Canada and the rest of America’s allies will continue to treat the United States as a dangerous friend. There will be no reversion to a pre-2016 world that puts Washington at the centre of all things. Ottawa will keep strengthening its diplomatic ties with Berlin and Paris. The multilateral community will continue to assume that the U.S. cannot be relied upon to lead and, in some cases, must even be contained. Regardless of Biden’s assurances that “America is back,” his intentions to rejoin the Paris accord, and his vocal support for NATO, the United Nations and the WTO, the world must operate under the assumption that Trump—or worse, another Republican politician who combines Trumpism with competence—will return to office in 2024. This threat, always at least four years away, will ensure America never leads the Western alliance again.

Eliot also wrote in “Little Gidding” that “last year’s words belong to last year’s language / And next year’s words await another voice.” This will most certainly not be the case in 2021. Expect the same language, the same voices, the same gloomy melody and the same lamenting chorus. Happy New Year!

This column appears in print in the January 2021 issue of Maclean’s magazine with the headline, “2021: Once more but with feeling.” Subscribe to the monthly print magazine here.