Cindy Blackstock: First Nations children and their families should receive some measure of justice without having to fight Canada for it. Why won't Canada pay? 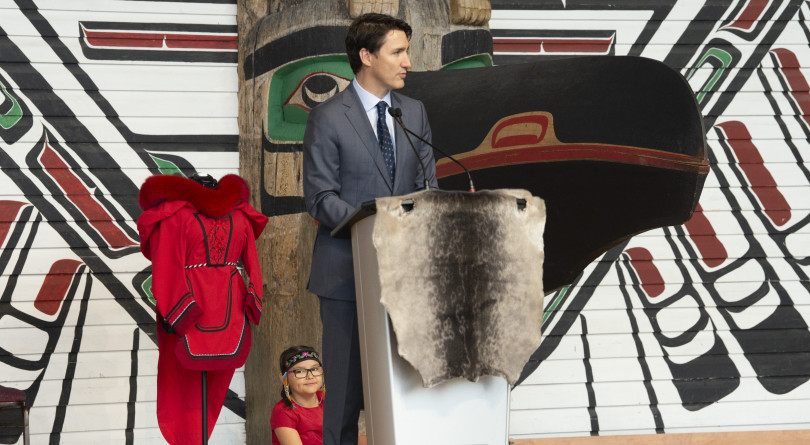 A young girl sits behind Prime Minister Justin Trudeau as he delivers his remarks during ceremonies marking the release of the Missing and Murdered Indigenous Women report in Gatineau on Jun. 3, 2019. (CP/Adrian Wyld)

Cindy Blackstock is a member of the Gitxsan First Nation and currently serves as the executive director of the First Nations Child and Family Caring Society and a professor at McGill University.

During the recent federal leaders’ debates, Prime Minister Justin Trudeau repeatedly defended his government’s judicial review of the Canadian Human Rights Tribunal’s decision to award maximum compensation to First Nations children and families affected by Canada’s longstanding, and ongoing, provision of inequitable child welfare and other services. Trudeau said he supports compensation; he just needs more time to talk to people so he can “get it right.”

The problem for the Prime Minister is that he has had time (lots of it), which has resulted in legal documents filed by the federal government quashing any orders for monetary compensation. Canada argues that it will experience irrevocable financial harm if it has to pay compensation to the First Nations children who have died or were unnecessarily separated from their families due to its chronic under-funding of child welfare and other services.

When it comes to egregious treatment of First Nations children, Canada is a multiple offender beginning with residential schools followed by the Sixties Scoop and their lacklustre response to 10 orders to end what the Tribunal terms “willful and reckless” discrimination in a worst-case scenario. Despite its record, Canada accepts little responsibility for its current conduct and wants to be left alone to determine what, if any, steps it will take to stop the discrimination and compensate the thousands of children it hurt. We must not let that happen.

This case dates back some 13 years, when the First Nations Child and Family Caring Society of Canada (Caring Society) and the Assembly of First Nations filed a claim pursuant to the Canadian Human Rights Act alleging Canada’s conscious underfunding of First Nations child welfare and failure to ensure equitable access to other services, such as health, education and early childhood development. This amounted to discrimination on the prohibited grounds of race and national ethnic origin. The Act, then and now, includes provisions for the compensation to a maximum of $40,000 per victim.

From the outset, Canada fought the case tooth and nail, trying unsuccessfully to have it dismissed on jurisdictional grounds on at least eight occasions. In its final submissions in 2014, Canada predictably argued that it should not pay any compensation.

Meanwhile, government records dating back two decades, laid bare the inhumanity of the federal government’s conduct. Critically-ill children often waited months or years to receive basic services from the federal government, including such items as medical equipment so they would not suffocate, feeding tubes, wheelchairs and nutritional supplements. When a child died waiting for the government to respond, bureaucrats called the cases “resolved.”

On the child welfare front, a Government of Canada spreadsheet showed that First Nations children spent a heartbreaking 67-million nights in foster care between 1989 and 2012. That is 12 times the rate of other children in Canada. The federal government even acknowledged on its own website in 2007 that its inequitable child welfare funding was contributing to what it called “growing numbers of children in care.”

In January 2016, the Tribunal released its landmark decision substantiating the complaint and ordering Canada to immediately cease its discriminatory conduct. Canada publicly welcomed the decision then did little to nothing, forcing the Tribunal to issue 10 more orders (and counting) to force the government to begin remedying the discrimination.

Since 2016, the Caring Society and the other parties repeatedly urged the government to settle the compensation matter through mediation so that First Nations children and their families received some measure of justice without having to fight Canada for it. But Canada refused. In the spring of 2019, the Tribunal held a hearing on compensation; Canada argued that it owed nothing to the individual children and families it harmed. This was months before the federal election was called.

The Tribunal’s compensation decision in Sept. 2019 stated that Canada’s discriminatory conduct contributed to child deaths and unnecessary family separations, which continues. This is something both Indigenous Services Minister Seamus O’Regan and the Prime Minister seem to have completely missed. Neither have proposed any action to reform the department so it stops its discriminatory conduct. Instead, they’ve focused on compensation for what Mr. O’Regan describes as “survivors,” evoking images of adult victims of Canada’s residential school and Sixties Scoop catastrophes. In the case of the Tribunal, however, many of the victims are still children and it is unclear whether or not they will survive Canada’s ongoing injustices.

The federal government filed its judicial review of the compensation decision on Oct. 4, the national day of remembrance for Missing and Murdered Indigenous Women and Girls. I thought about what this meant for families of girls, like Tina Fontaine, who tragically died in care. I also recalled the many Calls for Justice in the MMIWG final report directed at ending the inequalities in public services that contributed Fontaine’s death and the deaths of many others. I am not sure whether the Prime Minister or Minister O’Regan were thinking about the affected women, girls and families (neither even acknowledged the day with a tweet).

Some in government have proposed that the federal government needs to consult the victims of its discrimination to discuss what it should pay them, citing similar approaches used to settle residential school and Sixties Scoop class actions. After everything Canada has and continues to put the children and their families through, they should not bear the additional burden of arguing for compensation with a government that has caused them such great harm.

My sense is that Canada’s judicial review has little to do with wanting to “get it right” and more to do with paying nothing (or less than it was ordered to pay).  Historically, Canada only paid base compensation amounts of $25,000 to Sixties Scoop survivors and a meagre $10,000 plus $4,000 per year ($10 per day) to residential school survivors. The Tribunal awarded $40,000 per victim.

Though it remains to be seen how the judicial review will play out in federal court, the Tribunal is expected to issue further orders directed at ending Canada’s discriminatory conduct in the coming months on topics such as capital funding and the definition of a “First Nations child” for the purposes of Jordan’s Principle.

Whichever party forms government on Oct. 21, 2019 should know this: First Nations children must not continue to pay for Canada’s discriminatory conduct made with little to no regard to their lives. The Government of Canada is the perpetrator, not the victim; it must not be afforded the privilege of determining if, when and how, the discrimination stops and what compensation it ought to pay.