A dispatch from the future: Doug Ford's new civics curriculum 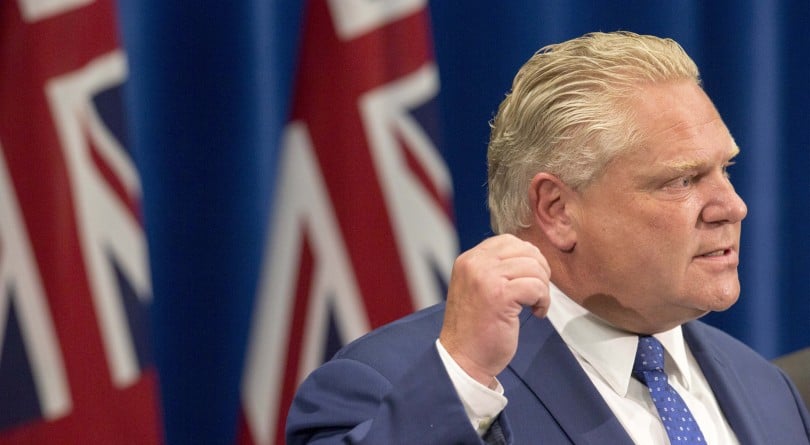 In August, Ontario Premier Doug Ford announced that not only would the Ontario PC government follow through on his campaign promise to consult widely with folks before introducing a new sex-education curriculum, he’s open to reactionary and ill-informed input on many other aspects of children’s education, as well.

Standardized testing and math scores are some of the aspects of education Ford believes could do with more material sourced from your uncle who insists that back in his day, everyone read Shakespeare uphill both ways, with a slide rule and a copy of their dad’s old Playboy, and it was just fine.

In keeping with Ford’s usual respect for consultation, all the information gathered from “folks,” any experts in the field who happen to stumble into the wrong room, and educators who manage to call into talk-radio shows pretending to be Stephanie from Collingwood (“Hi, I voted for you…”) will be efficiently filed in a shredder. The Premier will then do whatever boneheaded thing he wants to do in the most disorganized and damaging way possible.

Luckily, my sources from the future, having given up trying to warn me about all the dark futures only I can prevent—because I tend to get distracted, and preemptive apologies to Borgholm, Sweden, because there was something about great swarming masses of owls blocking out the sun and I meant to book a flight—are amusing themselves by leaking as-yet-unwritten Ontario government documents to me.

Presented below is the entirety of Future Ontario’s civics educational material.

What is a bill? A bill is a thing that becomes a law through a process that nobody could possibly learn about before running for premier and this document has had enough of your gotcha questions!

What is the Charter of Rights and Freedoms? A stupid idea intended to limit the freedom of great guys with awesome names like “Doug” to shove municipal governments into lockers, take their transit money and NOOGIES!

What is this amazing thing called Section 33? Section 33 is the totally kick-ass section. Section 33 is the section 101 with unobstructed views section of the charter. This is the section that allows non-elites who stand for the people—rather than special interests or politics-as-usual—to pass legislation depriving the people of the rights guaranteed to them by the Canadian Charter of Rights and Freedoms. It is often called the “notwithstanding clause” by people who are not trying to downplay the use of Canada’s constitutional “In case of emergency do not break glass, do not push, do not even look at too long really, just don’t mess with this button it’s a bad idea” button to spite a city you hate but just can’t stop thinking about late at night when you’re all alone.

Why do we have Section 33 and what makes it The Best Section? Back in the 1980s, when cruel fate had yet to deprive us of vital alliterative beer pricing and good hair, the notwithstanding clause was written into Canada’s constitution on the perhaps naive understanding that all political parties have a judicious concern about precedent, a respect for norms, or a few not-craven MPPs in their ranks capable of showing up and saying “no” so that no Canadian citizen would ever have to pick up a paper one morning and shout “What the hell? Who gave Mendacious Kool-Aid Man the notwithstanding clause?” And, oh, sure, Doug, you can have your phone back.

Section 33 was just the thing you do to get the deal done. Like lobbying folks at city hall on behalf of a couple of companies that your family firm does business with.

It was only to be used in the most dire circumstances. Like when a great guy named Doug spends a single term as city councillor but the whole thing sucks because everyone gets all “No, Doug, you can’t just help your buddies build malls and ferris wheels all over the place,” or “Doug, it is both bizarre and needlessly cruel of you to force your brother to weigh himself in front of his colleagues, reporters and TV cameras.”

Picture it: this totally hypothetical guy named Doug just wants to be elected mayor so he can finally show everyone who’s boss and the stupid Citizens of Stupid don’t elect him. So finally, he goes and gets himself elected Super Mayor (or “Premier” as some liberals insist on calling the position) instead and he’s all prepared to slash Stupid Casino Hater Town’s city council in half so as to very possibly prevent a fair election. Then, some jerk who thinks he can interpret the law just because he’s a “judge” on the (They Think They’re So) “Superior Court” says he can’t because “blah blah, violates Ontarians’ charter rights, blah blah.”

That—and any other time the charter gets in the way of some great guy named Doug’s spiteful arbitrary whims even though his party was elected and therefore owns the province now—is the kind of serious legal crisis the notwithstanding clause, never before used in Ontario, was intended to resolve.

What is a city council? Like public libraries taking up land meant for Tim Hortons, city councils (at least in cities that don’t meet provincial “Dig the Doug” standards) are filled with  “councillors” who take up space that could be better used by giving whichever of their colleagues Our Supreme Election Winner allows to keep their positions a personal in-council slot machine.

What is a judge?  Judges are just the worst because they are not elected, like Doug was! So no one should ever have to abide by their rulings. Unless they rule “Right on, Doug!” about his carbon pricing suit against the federal government—in which case they must be respected by all losers! But mostly, the judiciary should remember that because no one voted for them,the Premier’s plan to turn Ontario into a 350,000 square miles –kilometre The Purge-themed amusement park with “Real Murder in the Street Action™” is totally legit.

Our Super Mayor may not have campaigned on a complete suspension of the law, but he did win the election, and he’s got a hankering for chaos, so it’s basically the will of the people.

What is an election? Elections are a process by which some great guy, probably named something really cool like “Doug,” wins and everyone admits they’re big stupid losers who should have appreciated Doug’s monorail idea more. Then Doug gets down to the important task of fulfilling his election promises by successfully getting businesses to sell $1 beer for approximately 15 minutes, then gets to be the boss of city council, but don’t worry, he’s moved on now.

What is the role of the Premier of Ontario? He is an election winner whose primary duties are “fix this city.” Apparently he also runs something called “the Province of Ontario” which most people call “cottage country” but if the people there wanted a Premier who cared about that, they’d have elected someone with a less impressive name than “Doug.”

Hey kids! That was some fun knowledge, huh? Before you go, has your teacher been saying things like “a responsive municipal government helps ensure the needs of local communities are addressed”? Or “even if you honestly believe a city as large and diverse as Toronto would be better run with half the city councillors it currently has, throwing the whole democratic process into chaos by making those cuts immediately before the start of an election, when many candidates have already committed time and resources to running in wards that may soon not exist, is just a bad idea”? Has your teacher referred to the “City of Toronto” at all, instead of its proper name of “Ferris-Wheel-Less Loserville?” Well, tell your parents to report them and help put a stop to these Streetcars of Education. Like above-ground public transit and nearly-completed green energy projects, teachers who attempt to provide their students with a comprehensive education undermine the fabric of our society and must be removed at any cost.