A double-double of cynicism in Ontario

Tom Parkin: Wynne is allowing smart ideas to be condemned as profligate spending. Ford counters with next to nothing. What's a voter to do? 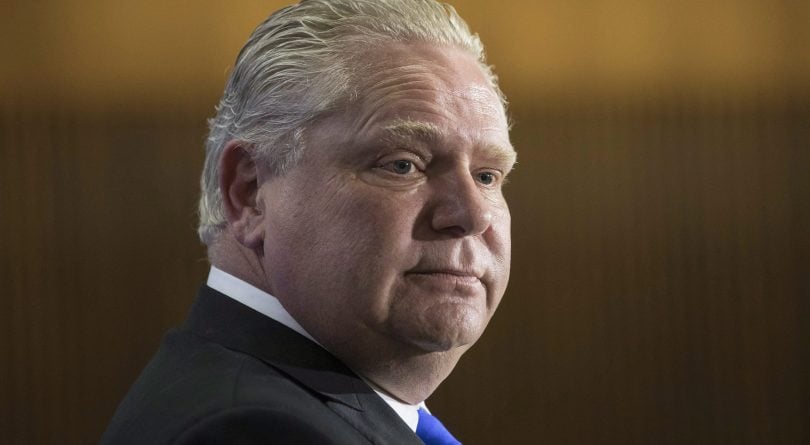 Ontario PC Leader Doug Ford takes questions from journalists as the Ontario government prepares to deliver its 2018 Budget at the Queens Park Legislature in Toronto on Wednesday, March 28, 2018. (THE CANADIAN PRESS/Chris Young)

This week Premier Kathleen Wynne treated Ontarians to what surely is the greatest own-score in Canadian politics in a long time. Apparently having 80 per cent of Ontarians itching to give her the heave-ho in a few weeks wasn’t enough. In a bid to reach unanimity, Wynne thought it wise to table a budget bereft of any universality—except in the mocking of its insincerity.

After 15 years in government, it suddenly dawned on the Premier just 72 days before an election that a lot of Ontarians are struggling with the cost of everyday life—costs the Wynne Liberals have contributed to or ignored.

While wages have been stagnant, big items like housing, electricity, tuition and child care have shot to the highest price levels in Canada. Amid a province of incredible wealth, many Ontarians are literally being impoverished by the cost of basic things.

Suddenly, Premier Wynne discovered some Ontarians are unable to pay for drug prescriptions. Can’t pay to get their teeth checked. Can’t keep a paycheque because they can’t find affordable child care. And rather than craft some thought-out universal programs, it seems Wynne’s courtesans got together last weekend, watched some video of Horwath’s past policy announcements and dashed off some text. This calamity is what we have come to know as Ontario Liberal Party policy development.

If anything creates voter cynicism, exhibit A is Kathleen Wynne.

For the last year, Andrea Horwath has been leading the policy agenda in Ontario. Last year the NDP leader announced policy on minimum wage, rent control, pharmacare. And, lo and behold, right after the Wynne Liberals patched together some shoddy imitations—sometimes literally just a few days later. This week’s budget just added child care and dental care to their offering of cheap knock-offs.

On one hand an advantage goes to Horwath. The ideas Wynne stole from Horwath’s policy book were mimicked in such a slap-dash way, and with such an insincere motive, that anyone who supports the ideas can surely see Horwath is the more reliable, trustworthy and competent leader to carry them through. That comparison is clear.

But in the other hand—and what makes the advantage less clear—is the poisoned chalice of cynicism that Wynne has handed to Horwath. The NDP Leader may be more reliable and trustworthy on dental care, pharmacare and child care. But now those very ideas are tainted by association of political cynicism. That makes Horwath’s job of pitching those policies just that bit more difficult.

Child care and pharmacare are indeed smart economic and social policy. Report after report has shown that a universal pharmacare plan would save billions in drug costs. And the economic evidence shows that because child care gives parents—women, mostly—a choice to continue working, it adds to GDP and boosts tax revenues enough to pay for the government child care subsidy. But Wynne didn’t even try to make those economic arguments, allowing smart ideas to be condemned as profligate spending.

Nor did Wynne make any argument for putting these programs on a stable footing. Sure, pharmacare and child care cost less when done publicly—but they’re not free. Like universal health care, some services can be cheaper when publicly co-ordinated, but they still need to be funded. Horwath has talked about increasing revenues from corporate taxes and high income earners to pay for her plans. Wynne skipped that discussion, showing no plan to sustain her dental or child care plan for the long-term. But then again, for the Wynne Liberals the long-term is 72 days.

But cynicism Exhibit B is PC Leader Doug Ford. His response to Wynne’s budget rambled almost incomprehensibly. At one point he said something about tax cuts. If Ford had talked about dental care then drifted into a discussion of using rusty pliers for tooth extraction it would have fit perfectly. Certainly Ford looked nothing like a premier and offered nothing like a plan for governing.

Of course the highest Doug Ford ever climbed up the greasy pole of politics was to the position of ill-informed city councillor. In tandem with his mayor brother, Ford excelled at the easy work of cutting revenues. But he left no legacy—except Toronto’s financial mess, an extra $1 billion in public debt and a new tax to pay for his pet subway project.

Budget day was the day for Ford to put on his Premier suit—instead he came stripped of any message, policy or alternative to Wynne. He provided no hope.

Perhaps the PCs’ lack of policy is rooted in knowing their coalition of anti-Wynne voters is hardly as united behind a cut-and-privatize agenda as they are. So Ford cynically tries to slide by with thoughts no deeper than what can fit on a bumper-sticker. So when, on budget day, his job was to show his plan for governing, he didn’t.

Horwath is the most popular leader of the bunch and has been leading the policy agenda. She’s even willing to show how she’d pay for it. But with the visionless Ford and the insincere Wynne insisting that voters must settle between bad and worse, Horwath is still the underdog. But with 80 per cent wanting Wynne gone, when voters look closely between Ford and Horwarth, they’ll likely conclude only one is offering a change for the better.