A letter from Quebec to my friends in Alberta

Alec Castonguay: You’re angry, I get it. But the source of your woes is not Quebec, where consumption of Canadian oil has in fact exploded 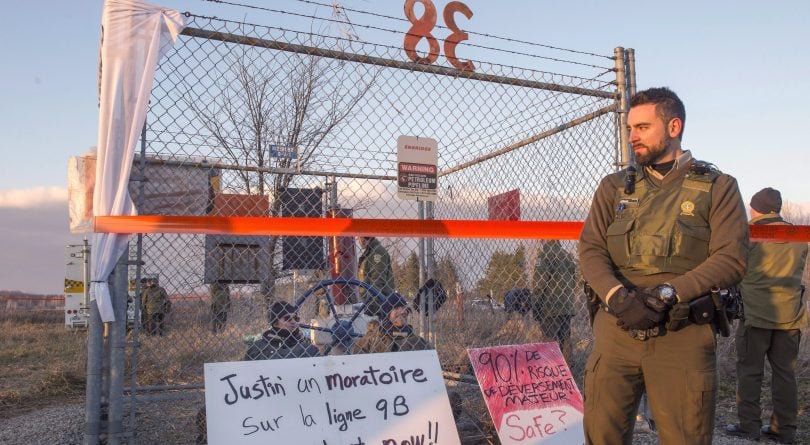 Police watch over two demonstrators locked to a valve along Enbridge pipeline 9B on Dec. 7, 2015, in Ste-Justine-de-Newton, Que. (THE CANADIAN PRESS/Paul Chiasson)

Alec Castonguay is the political bureau chief for L’Actualité, where this column first appeared

I’ve come to visit you often enough in Alberta — whether I was reporting stories, interviewing politicians or simply on vacation — that I’ve gotten to know you a bit. Maybe not enough to call you “friends,” but in the Facebook era, friendship comes easily.

(I do have real friends there, however. A special hello to Carl B., a customs agent in Calgary, who’s better at stopping bad guys than at winning hockey pools.)

In politics, Alberta friends, you have a hot-blooded streak a Quebecer knows how to appreciate. In fact, I’ve always thought Albertans are the most Québécois of Canadians. You’re emotional, your choices aren’t always logical, you get your back up when attacked and you’re quick to act. And you mistrust Ottawa and its big paws almost as much as we do. When the federal government starts to long for areas of provincial jurisdiction, as it recently did for a national securities commission, Quebec can always count on Alberta to join it on the front lines. Sometimes the two of us can even succeed in getting Manitoba to follow along with us.

So I wasn’t surprised to see your bitter reaction after our premier, François Legault, talked about “dirty energy” on Dec. 7 in reference to the oil sands. He’s not really wrong, because that oil is hard to extract. And he’s right to say Energy East doesn’t have the “social acceptability” it needs to get built, even if you really really want it. The proponent, TransCanada, botched its homework and finally gave up because it’s no longer commercially viable. Even Ontario didn’t want it. Quebec is just a handy target.

I’ll grant you, however, that Legault was seriously lacking in diplomacy. A rookie mistake in the Canadian big leagues. He should have known he’d put a match to a powder keg, given the political context in your corner of the country.

You’re angry, I get it. The low price of oil is a drag on your economy. It sells at a discount to the Americans, because there are no outlets to foreign markets that would allow for a better price. You’ve lost 100,000 jobs in the energy sector in three years, to the point where your government hopes to buy 7,000 rail cars to get the oil out by rail.

And your provincial elections, which must be held before May 2019, do nothing to calm the public debate down. Adding a little “Quebec” spicy sauce is a surefire formula for political success in Alberta.

But the scale of the reaction surprises me a little, I admit.

In the last few days we’ve seen an odd contest in Alberta: a competition to see who can blame Quebec the most. From the NDP premier Rachel Notley to the United Conservative Party leader Jason Kenney, from the former Wildrose leader Brian Jean to Calgary mayor Naheed Nenshi, everyone’s playing.

There’s even a movement to boycott Quebec products, targeting Air Transat, Natrel, Saputo, the little Jos Louis cakes made in the Beauce— Maxime Bernier, the region’s MP who likes to call himself “the Albertan from Quebec,” will be disappointed—and even our tasty maple syrup! Living without this sweet nectar seems to me like cruel and unusual self-inflicted punishment, but it’s your decision after all.

But I think you’re missing some information to help you understand that Quebec, despite François Legault’s words, isn’t the source of your woes. On the contrary.

Since the announcement of the defunct Energy East project, in August 2013, the geopolitical map of oil has been transformed in Canada. At the time, Quebec wasn’t importing a drop of oil from western Canada. None. Then the situation started to change, clearly without anyone telling you. A little oil came to us by train, but the big change came in 2015 when Enbridge reversed the flow of line 9B, which connects Ontario and the east end of Montreal.

Since then, our consumption of Canadian oil has exploded. In 2017, according to Quebec’s department of finance, 47.6 per cent of the oil consumed in our province came from Alberta. That’s not an anomaly. The Chair in energy sector management at Montreal’s HEC business school, in his most recent update published a few days ago, shows that in June 2018 53 per cent of our oil came from the West.

At this pace, Quebec will have consumed 70 million barrels of Alberta oil in 2018 — 53 per cent of the 137 million barrels consumed in total every year. At an approximate average price of $50 for Western Canada Select in 2017, that represents $3.5 billion. Not bad for a province that’s supposed to be at the origin of all Alberta’s problems. I know, Legault could have started by saying that, but…

Another thing, Alberta friends: you’d be nice—and more factually correct—to stop saying Quebec gets its fuel from dubious sources like Saudi Arabia. It’s false. Not a drop of our oil has come from that country since 2006. And between 1990 and 2006, the quantities were minimal — in 2006, it was less than 0.5 million barrels. It’s been 30 years that Saudi Arabia has been a drop in the bucket of Quebec oil consumption.

Our most important source, after Alberta, is the United States, with 40 per cent of our imports. That leaves barely 7 per cent for Algeria and the United Kingdom.

I’m not even talking about natural gas, of which Quebec imports almost all it uses. In 2017, 40 per cent of our supply came from Western Canada and 57 per cent from the U.S. If the LNG project in Saguenay opens as planned in 2025, with its goal of refining 30,100 tonnes a year for export purposes, you’ll be even happier, because the gas will come entirely from the West.

And please, no lamentations about the federal equalization program. The economist Pierre Fortin has demonstrated very well that there is no connection between this program, your budget balance and the services Quebecers pay for with their taxes. (The economist Trevor Tombe offers a similar explanation.)  If there’s reason for anger on this front, it should be directed at your own political choices.

Energy East was badly conceived, Keystone XL is delayed again in the U.S. and B.C. doesn’t want the TransMountain expansion, which Ottawa finally decided to nationalize in an attempt to complete it. Besides, Justin Trudeau is getting his head bit off in Quebec for that decision while as far as you Albertans are concerned, he’s not going far enough. Which just goes to show you how complicated federal politics is.

Oh, and we Quebecers would really like to sell our surplus hydroelectric capacity to neighbouring provinces, which aren’t very open to the idea at the moment.

And I haven’t yet mentioned the need to reduce our greenhouse gas emissions in Canada to hit our Paris Accord targets, the only way to ensure there’ll still be a planet in a few years. Otherwise, dear friends, how will we be able to keep arguing about equalization and pipelines? It would be as regrettable as giving up maple syrup.

I get the feeling we’ll talk some more about all this in 2019. Merry Christmas and Happy New Year, friends.