A letter to a daughter: 'When you arrived, not knowing French was no longer an option'

Before You Go: Mike Commito and his wife Chantal wanted their young child to have French as a mother tongue. But what would that mean for a father who’s hardly fluent? 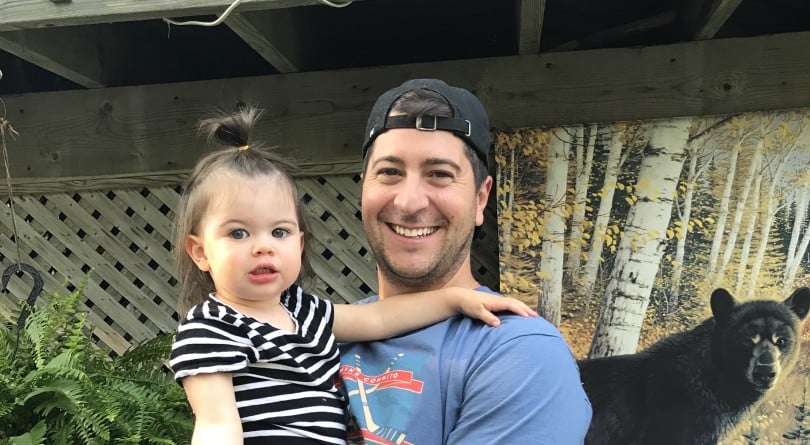 Mike lives in Sudbury, Ont., with his wife, Chantal, and daughter, Zoe. He works at Cambrian College and is the author of the book Hockey 365.

You speak French. This, on its own, is not remarkable. Your mother Chantal and I spent most of our lives in northeastern Ontario, a region where French runs deep. Your mother’s first language was French and now, as a French immersion teacher, she’s imparting that knowledge on to her pupils. And you’re Canadian, after all: you should know both of our official languages.

But when your mother and I decided, before you were born, that we wanted to raise you as a French speaker, I can’t lie: my chest became gripped with anxiety. Not because I didn’t want you to speak the words that your mother had grown up learning—but because of my own irrational insecurities.

I grew up speaking English. Sure, I picked up the occasional word of Italian or Ukrainian from your great-grandparents, but I spent my early years in southern Ontario, where there wasn’t as much of an emphasis on learning French in school. By the time I arrived in Timmins as a 12-year-old, I didn’t really speak a lick of French. I figured I would be done with it once I completed my compulsory requirements in high school, and I dropped it after the ninth grade.

It never felt urgent to address. But as I got older, I began to realize how much of a mistake that was. Certain job opportunities were closed off to me because I lacked the requisite language skills. Then, while teaching history at Laurentian University, an institution with a bilingual mandate, I would dart down hallways when I saw my French colleagues approaching, out of the dread I felt about potentially fumbling around in French in front of them. And while I took a few classes to try to learn, they brought me no closer to being bilingual. I was, as they say, une tête carrée.

As someone who spent 12 years in university studying our nation’s history, my lack of French also meant I often felt disconnected from the subjects I studied. When I traced the history of the Dubreuil Brothers Ltd., for instance—a family lumber company from Taschereau, Que., that migrated to Ontario during the Great Depression—I was able to stitch the threads of their story together because the company’s official correspondence with the province’s Department of Lands and Forests was in English. That, however, was just one part of the story; although the reams of documents I sifted through captured the four brothers’ entrepreneurial spirit and ingenuity, there was just as much material that I couldn’t read simply because it was in French. As much as I thought I understood the Dubreuils through the lens of their innovations in Ontario’s forest industry, I realized I didn’t know what they wrote to family members in hand-scrawled letters, or what they said in interviewed recordings in which they spoke in their mother tongue. I couldn’t tell their whole story. I didn’t really know them at all.

Which brings me to you, mon coeur. We wanted you to speak French because we wanted to ensure that you will have the opportunities I didn’t; we wanted you to be able to tell your rich story in full, and connect with your heritage in ways I have often longed. Still, I feared that if I didn’t learn French, I wouldn’t be able to understand your first words—and to not fully know you was a loss I couldn’t begin to comprehend. So when you arrived, not knowing French was no longer an option. And now that you’re here, I know how foolish I was to worry.

You didn’t say much those first few months, which gave me ample time to confer with your mother to make sure I was saying my words correctly. And then when you did start to speak, and my tongue would occasionally knot itself as my brain worked to convert my thoughts into French, I was never embarrassed about it in front of you like I would be in front of your grandparents; this was just my duty as your father, after all. Leaping into the haze of the new worlds that languages unlocks is a scary experience, and many a French teacher has tried and failed to reassure me and make me feel confident about my French—but now all it takes is a gurgle or a smile from you and I have the courage I need to continue. Realizing that I’m speaking French—that we’re speaking our language—is all I need to know. Now I catch myself humming or singing along to your French children’s songs. I think it’s catching on.

You’re two years old now, and you’ve grown into an amazingly inquisitive and precocious little girl. I am in awe of how many new words you’ve added to your lexicon. Yes, it means that the next years will be even tougher; I’ll have to work so much harder just to keep pace with you. But I promise I will throw my whole heart into that task. C’est ce que font, les papas. C’est la raison je te parle en français.