A letter to a grandmother: 'I love you the way someone loves their home country'

Before You Go: Anna Maxymiw's relationship with her Ukrainian baba hasn't always been easy. But a hospital scare helped her see her anew 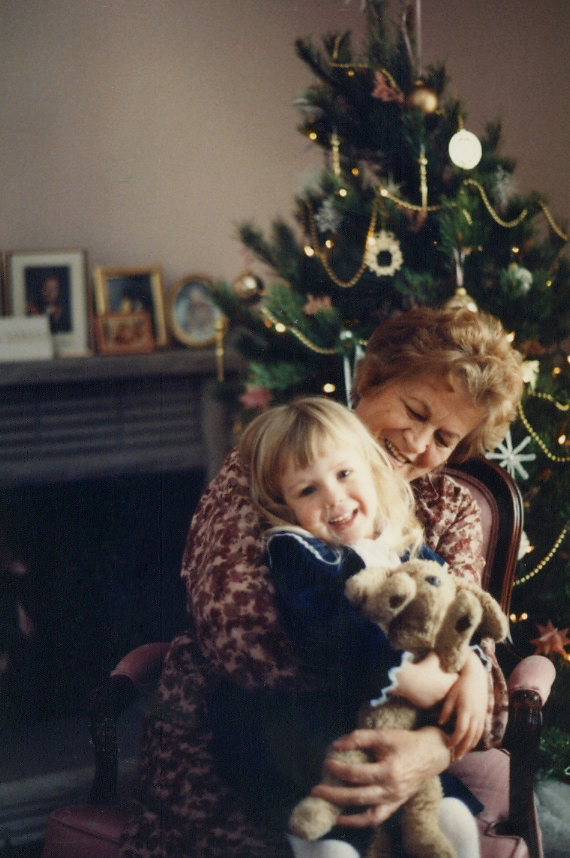 Anna Maxymiw with her grandmother.

Anna Maxymiw lives in Toronto. Her first book, The Lodge, is out with McClelland & Stewart in spring 2019.

You told me when I was younger that you wanted to be called Babcia, because Baba sounded too reminiscent of Baba Yaga, that ferocious witch of Slavic folklore who lives in the forest in a hut that stands on chicken’s legs, surrounded by a fence of human bones; who eats wandering children; who can be good or bad, kind or evil, but is always all-knowing and all-powerful. Even as a kid, I knew I was supposed to be scared of Baba Yaga, but I wasn’t. I might call you Babcia now, but in my head, the refrain is like a heartbeat: Baba, Baba, Baba.

It was clear from the start we would have a complex relationship. In your eyes, there were grievances to be found in me and my parents: when I was two, your husband—my dido—passed away, and you were in deep grief; at first, you weren’t happy that Dad had married a woman who wasn’t Ukrainian, and for a while, you refused to speak English around her; as a grandmother, you weren’t particularly warm or understanding or prone to physical gestures of affection. It didn’t help that I could be headstrong, too. I wanted to climb as high as I could on every jungle gym, and you wanted me solidly on the ground; you frustrated me so much that Mum used to catch me sticking out my tongue at you from behind my hand. And when you used to stroke my head and say moya, moya—mine, mine, in your native Ukrainian—I would hiss, “Don’t say that,” nasty in the way only a young child can be.

Still, spending the night at your old house near Toronto’s High Park was always a treat: I would open your one tube of lipstick that you kept on your radiator and try to imagine you wearing it; I would pillage your jewellery box to unspool necklaces of amber and coral and amethyst, running the slick beads through my hands; we would sit at the kitchen table and you would tell me folk tales about greedy girls and magic frogs and bold Cossacks and wolves in the forest. And late at night, we would lie in bed and listen to the radio, and only then could I say moya, moya back, in the dark, when your arms were around me. This is how our relationship continued over the next two decades—swinging back and forth between moments of tension and quiet, loving detente.

Then last year, in February, you got sick. Years of smoking caught up to you, and you lay in a hospital bed, panting, not able to take a proper breath. We thought you were going to die, and on the first day, you and I were kind to each other, like a new branch had grown overnight in the dense forest that was our relationship. But as the days passed, we reverted to old habits. I yelled at you when we were alone, because you were truculent and bossy and terrible—you were rude to your family, the people who were trekking across the city to see you and check on you, but kind to the hospital staff. For the first time ever, I saw fear in your eyes. Whether it was of me, towering over the bed, or of the idea of death, towering in the corner, I don’t know.

I hated visiting you in the hospital, but I came every week. I sat in the corner while you slept, thinking about us and the way family can love one another—ferociously, powerfully, sometimes both bad and good at the same time.

Later, when you were better, you told me that the last time you were in the hospital, you were an 18-year-old in Austria, sick with typhus, after having walked across Europe to get away from the Nazis and the Russians who were tearing up your home country. The doctors said you were going to die that night, but a nurse filled up every hot-water bottle she could and packed them around your body to keep your temperature up, and you lived. The day after you left the hospital, you said, it was destroyed by a bomb.

And that’s when I got it. The hospital wasn’t a safe place for you, because part of you has never been able to leave your Ukraine. There was no escaping that for you, even more than 70 years later. But you were strong; you tried your hardest at your new life. You worked as a housekeeper in small-town Ontario without really knowing how to speak English. You held your wedding reception with my dido in a Toronto kitchen with only two other people watching, and you ate fried chicken to celebrate afterward. You raised two sons to be good, kind men. You taught your family to be fierce and frugal and observant.

Now that I’m older, living on my own and farther away from you, I see you less often. You’re frailer, so you don’t always make it out to family events; at Ukrainian Christmas—Sviat Vechir—you come for only a little time or not at all; you don’t cook big meals the way you used to; you left that house near High Park for an assisted-living centre nearer to my parents. You’re still bossy; you still turn terrible sometimes. When I slip up and accidentally call you Baba, you snap, “No Baba. Babcia,” as if that one word could make you softer or easier or evict the powerful witch that is so clearly in your veins.

But I make it a point to call you every week. And though I know the call will be short, because you never chat for a long time, I still feel my heart swell every time I hear you say moya, moya at the end of our conversation. And every time, I say it back.