A son's letter to his single-parent Dad: 'He was not going to split us up'

Before You Go: At 46, Bert Demmings lost his wife—but he vowed to keep his family of five together. Now, as he turns 100, his son thanks him for a mission accomplished 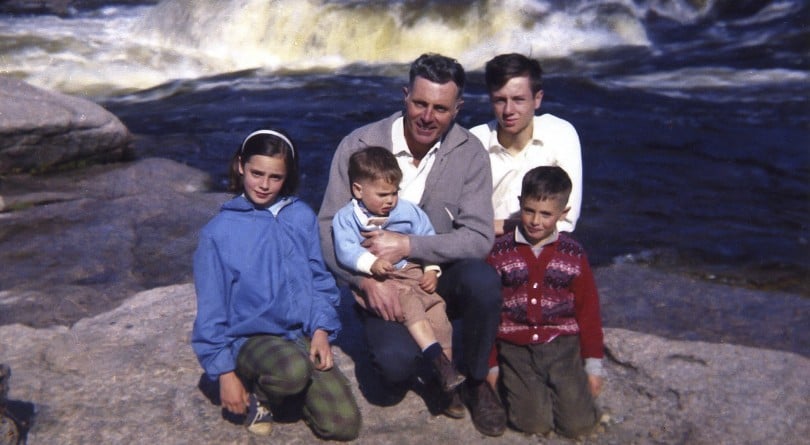 Bert Demmings, middle, surrounded by his kids in a photo at Pabineau Falls, N.B., in 1965.

Nine years ago, my brother John compiled a family album for my Dad’s 90th birthday. On the cover was a photo, taken 44 years earlier at Pabineau Falls, N.B., against the backdrop of a favourite family gathering place. There he was: my Dad, young, dark-haired, surrounded by his kids, kneeling and smiling straight ahead.

He was the only one with a smile on his face, though. In his arms, he held my squirming baby brother Michael; he was flanked by John, my sister Janet and me, ranging in age from one to 14 years. We had just lost our mother to cancer.

Over the years, I had completely forgotten about this snapshot. When I saw it again for the first time in more than four decades, it catapulted me back to a very painful and confusing period in our lives. Our facial expressions said it all: What do we do now? How do we survive as a family? Why has Mum been taken? Why?

But there was my Dad, staring resolutely into the camera, as if to say: “Somehow, some way, whatever it takes, we are going to get through this experience as a family.”

In the aftermath of Mum’s death, many of Dad’s well-intentioned family and friends offered to take us into their families, worried that Dad wouldn’t be able to raise four young kids by himself while also working full-time at a pulp and paper mill. But my father possessed a strong sense of right and wrong. Parenting his kids was his job, he said; he was not going to split us up. His perseverance would be the glue that held us together.

As a 46-year-old suddenly without his life partner, with no road map to lead the way, Dad had to figure out the patchwork process of keeping us under his roof on his own. In the early years, he hired housekeepers to help us muddle through. He showed us how to make chicken soup, his famous fish chowder, and homemade preserves, and he passed on his knowledge on how to fix just about everything. And he’d somehow have the time to make home-cooked meals for us every day at the pulp mill and bring them home, so we could gather at noon as a family at the kitchen table.

His devotion inspired my siblings and me, and over time, Janet and I pitched in more to help our Dad “right the mothership.” Janet would help raise Michael, and we would keep the home tidy, clear the driveway, or prepare supper so that when Dad got home, he had some downtime. Eventually, having learned from Dad’s example, we decided it would be best for us as a family to take care of ourselves without help from housekeepers. This stubborn conviction about doing things ourselves became ingrained in us as a family trait—at least, according to my wife Barbara’s frequent reminders.

Like so many young New Brunswickers, we kids went “down the road” to build careers and start families across Canada after college and university. Dad eventually found Margaret, who became Michael’s Mum, once we older siblings left Bathurst. Life went on—but it was Dad who worked so hard to create this “normalcy” in our lives. 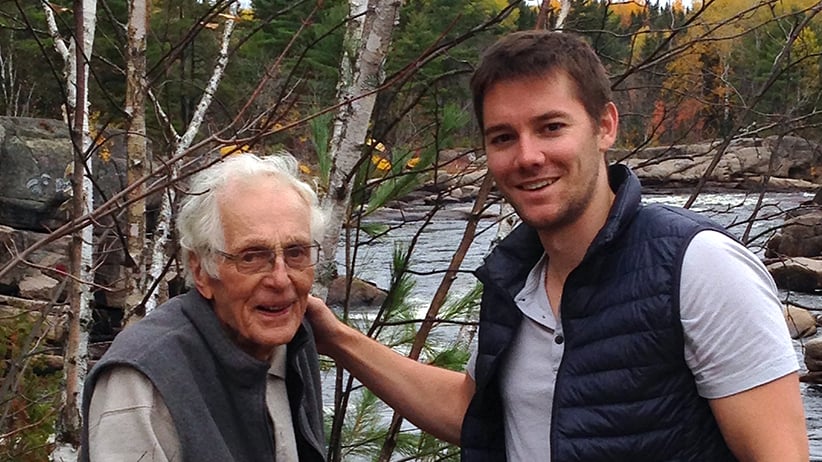 Bert Demmings and his grandson, Christopher Tooley, near the same spot at Pabineau Falls near Bathurst, N.B.

Dad is approaching 100 now, and his spirit is still indomitable. Too often, when making our long-distance phone calls home to Bathurst, we would cringe at reports of how Dad, in his nineties, would help friends and neighbours blow out their driveways after another late-winter Atlantic snowstorm, or get up on the roof of our family home to clean a chimney. One time, while on a visit home, my sister threatened to hide my Dad’s ladder, which only earned her a sharp retort: “Janet, don’t be ridiculous, I can do this.”

As kids, we intuitively understood the commitment our Dad was making to keep us together, and later in life, it inspired who we became as adults. But it took until 1997—when I got a call from my old Calgary roommate and friend, Rob—that I truly appreciated the enormity of the task my father had undertaken. Rob was a new father of three young children, but he had just received horrible news: his wife Linda had been diagnosed with stage-four non-Hodgkin’s lymphoma. Frantically, he bellowed at me over the phone: “How did your father do it? How did Bert raise four kids by himself?”

In part, the answer is Dad’s tenacity—the same iron will that wouldn’t let him back down, even when the pressures on him and his family were enormous, and the same strength of character that fuels his love of life, his friends and his family as he approaches the century mark.

Without my Dad’s firm resolve, we’d be less than who we are today. And for that, and so much more, Dad: I love you.