A widowed mother to her son: 'Your small life was so powerful, it saved mine' 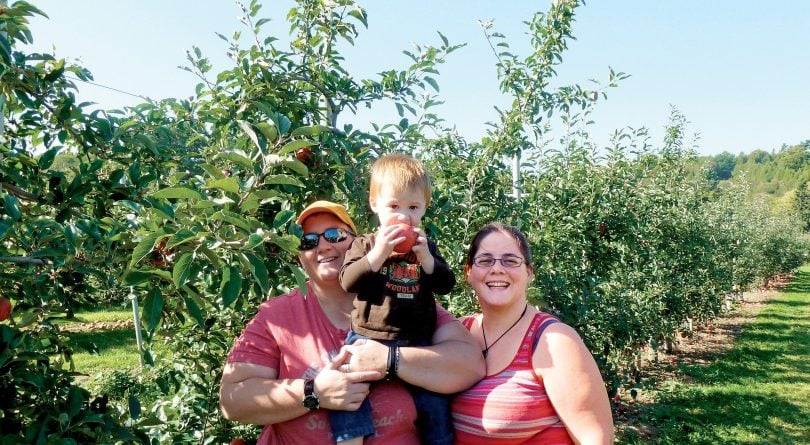 Kara (left) and Kelly with their son pose for a photo while apple picking.

People tell you that becoming a parent is an adjustment. That many couples bicker and struggle when a child enters the picture until the seas smooth into something to sail on. And when you were born, changing my world forever, that’s all I wanted. Your other mother Kara seemed to slip easily into her maternal duties like it was one of her old washed-out T-shirts, but I had more difficulty finding the right fit. I knew that I adored you, of course, and that the 42 hours of labour and the emergency C-section meant I was going to do whatever it took to keep you safe for the brilliant future of our family. I just didn’t know what that love would look like.

Still, at Apple Fest in Brighton, Ont., as we picked our own Galas and watched you play in the tractor tires and bales of hay on Mamma’s birthday, I saw the future, one where we went there every year. In that future, we take photos with our faces stuck through the holes in that silly board painted with fruits and vegetables; Kara was the corn, I was the apple, and you, my ginger boy, would be the pumpkin. There was another space for a face on that board, and we let ourselves dream about that too, with designs for a second child to complete the photo. We counted on marching toward our dreams, just like Mamma would continue to pretend to like Ferris wheels, and I would continue to pretend to like camping. Life would go on, our little family of three folding gracefully into the future that was waiting for us.

I am so sorry—I cannot tell you how sorry I am—that this could never happen.

MORE: To the birth parent of the child I will adopt: ‘We are one human family’

Sometimes death can wait around for months or years at a time, but my love, you and I did not get that time as a family of three. Death snuck up on us in a matter of weeks. When Mamma started feeling unwell in late October, it wasn’t so unusual—but two weeks later, it became pneumonia that meds couldn’t alleviate. When we sent Mamma to the hospital, I could not have imagined that she would never come home again. She had inhaled a silent, fatal mould called blastomycosis somewhere, and it shut her body down.

On Nov. 11, 2012, I suddenly became a 34-year-old widow with a child, and I couldn’t explain it to myself, much less to you. You were busy being a small, joyful one-and-a-half-year-old that did not have the language for me to explain why your Mamma was gone. I felt incapable of strength. I was terrified that I would fall apart under the pressure of being a single parent. I spent many afternoons curled in a ball on my bed, and part of me wanted to spend the rest of my life there, denying that this could have ever happened. The nights were long and cold and I wept every time you did, and more besides. One day, while huddled in the fetal position, it felt like the last strand of something in me broke, and I had the most horrifying thought of my life: I couldn’t live without your Mamma, so I might not live at all.

The thought passed quickly, but it was enough to make me call your Grammy and confess. I don’t know if it made it better or worse when she told me that this was normal, in her experience. Then I thought about you. I thought that your mother’s death was something that I could survive, but it wasn’t something I wanted you to have to survive without me. The horror of that thought galvanized me. You made me realize that I could do this, that I wanted to do this, that I would do this. I could laugh in the face of death and tell it that it would not break me.

When I realized that, my life began once more. I believe with all my heart it is the reason we have always been joined at the hip. Your small life was so powerful, it saved mine. The gift you have given me is the opportunity to be witnessed, to be held accountable, to show you and myself what I am capable of. Every day is an opportunity for me to make you proud, to amaze you, to make you feel so loved and so lucky that I am your mom. Because of you, my life has only grown better and more beautiful since this horrible, terrifying thing.

In the darkness of this tragedy, my love for you has made me the mama bear that was inside me all along. When I learned I was strong enough for you, I learned that I was going to be strong enough for myself—that my life was a gift I could give to you, as well as to me. I thought Mamma’s death was a deep scar over a wound that I was afraid we would carry forever, but these scars are not our weakness: they are as firm and as stabilizing as the trunk of a tree. They are evidence of how brave we have become in order to heal. And if these scars made me strong, I want you to know that even at times when you doubt it, even at times when you feel most alone or most forgotten or most unworthy, that you aren’t just as strong as me: you are in fact much, much stronger.

This article appears in print in the November 2019 issue of Maclean’s magazine with the headline, “Dear son…” Subscribe to the monthly print magazine here.

MORE ABOUT BEFORE YOU GO: