A woman to her sister with cancer: 'For now, I thank God you are here today'

Your public persona was ‘Madame Ambassador,’ writes Verla Chatsis to her sister. ‘To us, you are Deb, the little sister I still long to protect.’ 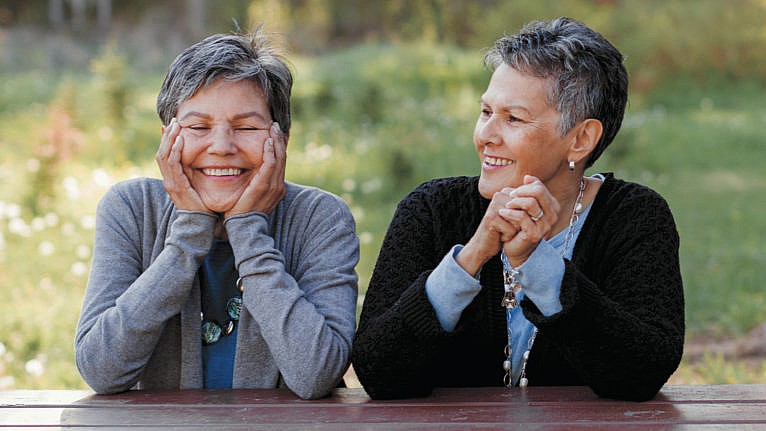 Kindred spirits again, sisters Deb (left) and Verla can share jokes no one else gets (Photograph by Breanna Doucette-Garr)

We were close as children, partly because we were less than two years apart, whereas our brother, Brian, was much younger, and we were the only Cree family in Ashcroft, B.C. We stuck together when we moved to Prince Albert, Sask., but as teenage snottiness took its toll, we drifted apart. We fought constantly, from chores to comparing marks, arguing loudly about who was smarter. Our friendship faded, kindred spirits turning into roommates.

The winter you were 15, Auntie Linda, Mom’s little sister, died from metastatic breast cancer at just 30 years old. Her daughter, our 13-year-old cousin Sandra, moved in and became our third sister. I was jealous that you and Sandra shared a basement room, secrets, and the occasional cigarette. Having my own room tasted like teenage rejection.

READ: Dear Mom, ‘I am nothing like you,’ I once thought to myself

Despite spending time in residential schools and not completing high school, Mom and Dad valued education and encouraged all of us to go to university. I headed to the University of Saskatchewan, and a year later you moved into the same campus residence. Still, we drifted further apart.

You became “Deborah,” and obtained degrees first in engineering and then law. After graduation you joined the foreign service, working in exotic locales like Beijing and Geneva, while I settled into my career as a pharmacist in Edmonton.

It was family illness that eventually drew us back together in our 30s. In the span of two years, Sandra, you and I were all diagnosed with breast cancer, and I also had a brush with ovarian cancer. We soon learned that Mom, Sandra and I had the BRCA1 genetic mutation, linked to breast and ovarian cancer, but you dodged that genetic bullet.

Two years after our cancer drama, we lost Dad to a stroke. Soon after, Mom died from ovarian cancer. Their deaths gutted us, but we helped each other through our grief.

With time and healing, life went on. Putting aside our childish competition, I admitted you were smarter than me when you won a Fulbright scholarship to Harvard. I was so proud when you became the Canadian ambassador to Vietnam, the first Indigenous woman to hold an ambassadorship, and when you received an honorary doctorate of laws from the University of Saskatchewan.

READ: A mother with cancer to her children: ‘When words fail me…at least I can say I love you’

You and I remained single and childless. We travelled together and planned our future, imagining our retirement oasis as a lakeside cabin where we would sip coffee and play Scrabble in the morning sun. Our childish fights forgotten, we were once again kindred spirits, our friendship mended by suffering.

But before moving to Guatemala for your next ambassadorship, you developed a raspy voice and cough. Doctors couldn’t provide a definitive diagnosis. Shortly after your move, I met Randy—the first man to truly threaten our spinster sisterhood. Randy and I got married and moved back to Prince Albert, his home.

In 2017, a CT scan finally determined your diagnosis: metastatic breast cancer. The irony is hard to ignore; Sandra and I have the BRCA1 mutation, but we remain cancer-free, while you are facing this disease again.

You moved back to Prince Albert with your adopted Guatemalan street dog, Ginger, into a home 150 metres from me. We are retired and our time together now is bittersweet, with trips to the cancer centre mingled with card games. Even now, you are driven and well-organized, making pragmatic decisions about home care and wills.

Randy and I are part of your community of support, but you and I, Deb, are the people who know each other best. We laugh at jokes no one else gets and share looks when amused by others. We are brutally honest with each other, but it’s tempered with love.

Your public persona was “Madame Ambassador,” or “Deborah” to colleagues; at home with us you are Deb, the little sister I still long to protect.

We spent last summer at a lakefront cabin in Saskatchewan’s boreal forest. Bundled in layers, you read on the deck, listening to the waves and rustling leaves. When you are gone, I will retrieve these memories and sift through them slowly and often. For now, I thank God you are here today.

This article appears in print in the July 2021 issue of Maclean’s magazine with the headline, “Dear Deb…” Subscribe to the monthly print magazine here.

FILED UNDER: Before you go breast cancer Editor's Picks