Pam Palmater: The Indian Act is used as a target to deflect blame for racist decisions made by the federal government; a clever guise to force the surrender of all First Nations’ rights 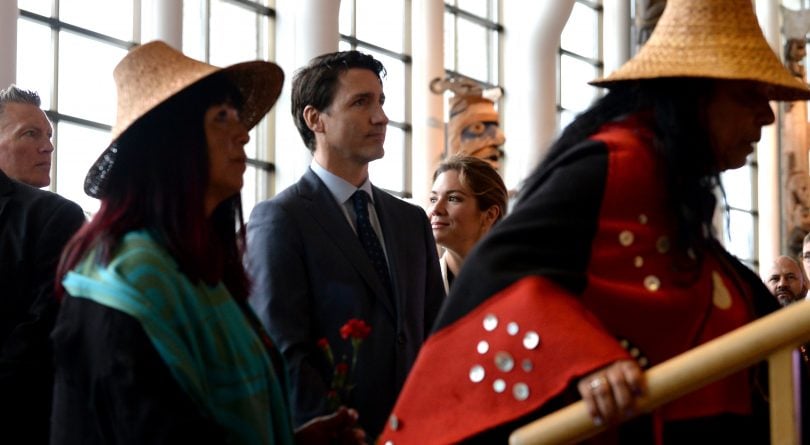 Prime Minister Justin Trudeau looks on as the procession takes the stage at the closing ceremony for the National Inquiry into Missing and Murdered Indigenous Women and Girls in Gatineau, Que., on Jun 3, 2019. (CP/Adrian Wyld)

In the 2015 election campaign, Indigenous issues were a central feature in the platforms of most of the candidates. In fact, Justin Trudeau’s campaign slogan was “there is no relationship more important to me than the one with Indigenous peoples.” He also distanced himself from his father’s 1969 White Paper on Indian Policy, which had proposed to abolish the Indian Act, privatize reserves and end treaties. This also helped to set Trudeau apart from former Conservative Prime Minister Stephen Harper whose government agenda was to eliminate the Indian Act and reserves. Yet once Trudeau was elected, his government resumed calls to transition away from the Indian Act, and despite the mass resistance to Trudeau’s legislative plans—including immediate abolishment of the Indian Act—Green Party leader Elizabeth May also included dismantling the Indian Act in her 2019 platform.

May’s platform asserts that the Indian Act is “racist and oppressive legislation” that should be dismantled in partnership with First Nations, while ensuring First Nations take the lead. Although she plans to set up processes for First Nations who want to opt out of the Indian Act in the interim, she admits it will be a complex process. In this way, her proposal does not appear to differ much from Trudeau’s.

The Indian Act makes an easy target, however, it’s not the crux of the problem. The real problem is race-based genocide. None of the platforms make tackling race-based genocide against Indigenous peoples an urgent priority, nor was it mentioned in the last two English debates, with the exception of May stating that she would implement the recommendations of the National Inquiry. The discussion is still about the Indian Act.

MORE: The Algonquin grandmothers’ fight for the sacred Chaudiere falls

The Indian Act authorized the Minister of Indian Affairs (as it then was), to set up boarding schools (residential schools), though there was nothing in the Act that required or even suggested that First Nations children should be stolen from their families and nations, while being starved, neglected, physically and sexually abused, tortured, medically experimented on, and left to die. Those were criminal and genocidal acts of race-based violence committed by individuals and groups. Similarly, while the Indian Act sets out that reserves are held by the Crown for the use and benefit of Indian bands (First Nations), nothing in the Act permits the federal government to racially discriminate against First Nations by purposefully and chronically underfunding critical social programs and services. Those are racist decisions made by people in government, and they lead to lethal results—First Nations have a far lower life span than Canadians.

Yes, the Indian Act is racist; it was designed with the intention of legislating Indians out of existence. In fact, the policies contained within the Act, result in a legislative extinction date for Indians in Canada. That means that the majority of First Nations who rely on Indian status and determination of membership through the Indian Act also have extinction dates. For well over 140 years, the Indian Act also specifically targeted Indian women and children for removal from their First Nations. The sex discrimination in the Act has been cited as one of the root causes of murdered and missing Indigenous women and girls in Canada. It is part of Canada’s infrastructure of laws, policies and practices that serve to devalue the lives of Indigenous peoples. So, to say that the Act is racist is an understatement; those offending sections should, without a doubt, be amended in the interim.

However, the complexities of the Indian Act goes beyond racism. It also serves as a legislative tool by which to hold the federal government accountable for their legal responsibilities. There are various legal protections within the Act, like tax exemptions for property on reserves and the protection of reserve lands from seizure. First Nations have less than 0.2 per cent of all their traditional lands as reserve lands, and preserving the integrity of those collective lands has been identified as a priority by many First Nations. The Indian Act also serves to protect—at least to some extent—from interference by the provinces. This is another major concern of First Nations who know that Indian Act abolishment, without other legal protections in place, means that their lands would be under provincial jurisdiction and vulnerable to the provincial governments’ voracious extraction and development appetites.

MORE: What the debate around Indigenous genocide says about Canada

Yet, despite all of these legal complexities and First Nations historic resistance to outright Indian Act abolishment, governments—both Liberal and Conservative—have continued to push hard on this agenda. Ultimately, the goal of Indian policy has always been the same: First, to acquire Indian lands and resources, and second, to reduce financial obligations acquired through treaties and other agreements with First Nations. The primary methods have been elimination and/or assimilation of Indians (i.e. genocide).

This policy agenda to “get rid of the Indian problem” has dominated successive federal governments despite their words to the contrary. The Indian Act is used as a target to deflect blame for racist decisions made by the federal government while at the same time being used as a clever guise under which to ultimately force the surrender of all First Nation rights. That is why it is so surprising that Elizabeth May would make Indian Act abolishment such a central feature in her platform, when it otherwise makes very significant commitments to First Nations.

Indigenous thought leaders like Russell Diabo have long warned about the dangers in falling for the government’s Indian Act abolishment agenda. When abolishment was promoted in the 1969 White Paper, it was for the purpose of eliminating First Nation rights. The same was true when Harper’s government pushed for it. There was no promise of substantive constitutional or legislative change to protect First Nations outside of the Indian Act. In Trudeau’s multi-million-dollar negotiating tables, what’s on offer is an agreement outside of the Act that results in ceding, surrendering and extinguishing First Nations authority and titles in exchange for municipal-type powers.

Diabo is right when he says, “history tells us the real objective is to hollow out and ultimately nullify any rights that Indigenous peoples have to meaningful self-determination.” Reliance on section 35 of the Constitution Act, 1982, which states that “the existing Aboriginal and treaty rights of the Aboriginal peoples of Canada are recognized and affirmed” is also not a realistic alternative, as the Supreme Court of Canada (SCC) has consistently hollowed Aboriginal and treaty rights through its successive decisions. From Sparrow to Delgamuuwk decisions and beyond, the SCC went from protecting Aboriginal rights as its first priority to making it the lowest priority after settlement, mining, forestry and other extractive agendas.

This makes May’s inclusion of Indian Act abolishment plans stand out in her otherwise thoughtful platform which specifically acknowledges Indigenous sovereignty and territory. It is as if she hasn’t read the responses of First Nations to the 1969 White Paper by Harold Cardinal for the Indian Association of Alberta (“Red Paper”), or the “Wahbung: Our Tomorrows report” by the Manitoba Indian Brotherhood (now Assembly of Manitoba Chiefs), or the Union of B.C. Indian Chiefs response which came to be known as the “Brown Paper.” It is also as if she missed the entire Idle No More movement where thousands of First Nations across the country protested over Harper’s legislative agenda, which included repealing the Indian Act and whittling away First Nation rights outside of the Act. Had she paid close attention to Trudeau’s very public fall from favour with many First Nations, she would have noticed the nation-wide protests against Trudeau’s top-down imposition of legislation impacting First Nations and realized that a pan-Aboriginal, one-size fits all approach based on Indian Act abolishment, might not be the answer.

In fairness, May is not the only one peddling outdated solutions for moving forward. Harper’s Conservatives and Trudeau’s Liberals both made it the central feature of their agendas. While Conservative Leader Andrew Scheer has not released his platform, Conservatives passed the Indian Act Amendment and Replacement Act in 2014 requiring the Minister to report on progress made to repeal and replace the Indian Act. Even Maxime Bernier’s Peoples Party of Canada platform includes the repeal of the Indian Act to be replaced with laws to make Indigenous peoples like other Canadians and privatize (break up) reserve lands. However, much more was expected of May given her consistently strong commitment to Indigenous issues and the environment. If she hopes to gain Indigenous votes, she needs to throw out the Liberal-Conservative status quo playbook and think outside the Indian Act abolishment box. She might take note of the NDP’s platform, which breaks from this Indian Act mantra and instead focuses on working towards Indigenous self-determination without pre-determining what that will look like.

While governments continually say they reject the paternalistic approach to working with First Nations, they continue to unilaterally impose their own laws, policies and solutions. It is long past time that Canada stopped acting as the saviour of Indians. A respectful path forward that will mean skipping national Aboriginal organizations like the Assembly of First Nations, who are effectively coopted by federal funding and instead, negotiate directly with actual, rights-bearing First Nation governments. Let First Nations decide the way forward and accept that one-size fits all will not work. This might mean some First Nations want to opt-out of some or all aspects of the Indian Act, while others will not. It might also mean that some First Nations are fine to negotiate municipal-style governing arrangements, while others want inter-governmental agreements that respect their sovereignty and jurisdiction in all areas.

If we get this nation-to-nation partnership process part right, then the Indian Act eventually becomes irrelevant, but at a pace which works for First Nations without any risks to their rights. The honour of the Crown and the spirit and intent of the treaties demand no less.