Max Fawcett: Greta Thunberg's visit to Alberta will shine a global spotlight on its oil and gas industry. But it looks like they're about to squander their moment. 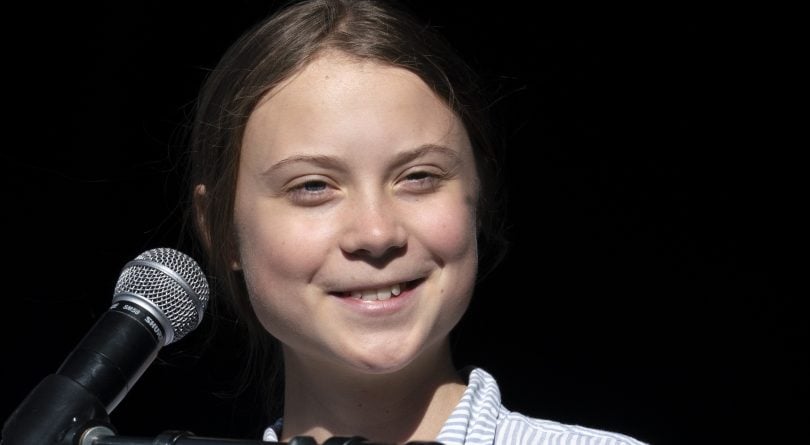 Swedish activist and student Greta Thunberg walks off the stage after addressing the Climate Strike in Montreal on Sept. 27, 2019. (CP/Paul Chiasson)

For months now, Jason Kenney and his United Conservative Party have talked up the merits of their approach to fighting for the interests of Alberta’s oil and gas industry. They’ve created a $30-million “war room” (now called the “Canadian Energy Centre”), announced a public inquiry that will investigate the province’s critics and where they get their funding from, and they’ve generally struck a more strident and unapologetic tone than the Notley government ever did. And now, they get their first high-profile test: Greta Thunberg.

The Swedish teen and climate sensation will be coming to Alberta this week, and she will be bringing her usual message of unflinching determination and uncompromising resolve in the fight against climate change. She will chastise adults for their lack of decisive action, dismiss their efforts to play for time or rag the puck, and attract millions of eyeballs to the conversation that ensues. For a government that has often complained about the unfair way that the rest of Canada—and the world—treats their industry of choice, this is a perfect opportunity to tell their story; it already looks like it’s an opportunity they intend to squander.

Matt Wolf, the executive director of issues management for Premier Kenney, set the tone for Thunberg’s visit with a tweet (his medium of choice) that nodded at the Ethical Oil argument Ezra Levant has been making for nearly a decade. “We trust that Ms. Thunberg will recognize Alberta’s leading human rights & enviro standards,” he wrote on the social media platform, “especially in comparison to oil-producing dictatorships such as Saudi Arabia, Iran, Russia & Venezuela—which she will presumably visit next.” Smug sarcasm is never a good tone to strike with a teenager, and that’s particularly true of Thunberg, who successfully parried President Trump’s attempt to diminish her with both style and grace.

MORE: Jason Kenney does for the federal Tories what Doug Ford can’t

Sonya Savage, the province’s energy minister, was more careful in her response on Facebook to Thunberg’s imminent presence, noting that Albertans are “welcoming and respectful.” But the government, and its various war-oriented organs and apparatuses, has to prove that with words and deeds.

It should invite Thunberg to discuss the environmental improvements that Alberta’s energy sector has made with some of the companies that are making them. Suncor, for example, recently announced a $1.4 billion investment in a low-emission co-generation facility that will deliver greenhouse gas (GHG) reductions equivalent to taking 550,000 cars off the road. Canadian Natural could tell her about its in-pit extraction process that has eliminated the need for tailings ponds and reduced GHG emissions by 40 per cent.

This is tangible and meaningful environmental progress, and a stark contrast to what’s happening in Texas, New Mexico, and Pennsylvania right now. The government should also facilitate a conversation between Thunberg and the province’s Indigenous communities, many of whom have benefited directly from the energy sector’s activities, and some of which are now participating in them as owners. Here, too, there’s an important contrast to draw with other oil-producing regions in North America, where Indigenous voices are less likely to be at the decision-making table or participating as owners.

But whatever else it does, it should resist the temptation—one that’s clearly felt in the Premier’s office—to attack Thunberg’s character or question her motives. And it must avoid comparisons to despotic regimes like Russia and Saudi Arabia, since Thunberg is even less likely to view them as appropriate points of comparison for a country like Canada than the average Canadian might be.

Her visit is an important test for Kenney’s government and its more aggressive vision for how the government can help the oil and gas industry secure market access. It’s a test of their willingness to look beyond their own short-term political self-interest, and to speak to a community that’s larger than their base in Alberta: of their understanding that the oil and gas industry’s biggest enemy isn’t environmental activists or non-conservative politicians but global markets and technological change; of whether they realize that the best way to win a fight is often by not starting one in the first place.