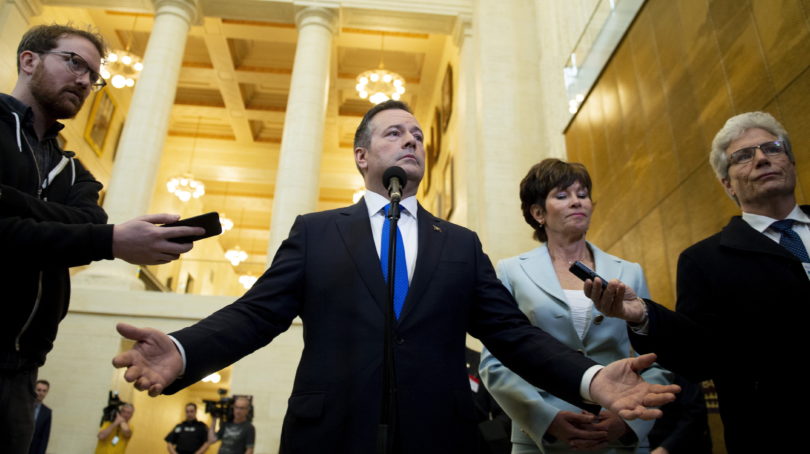 Alberta Premier Jason Kenney reacts to a question as he speaks to reporters on Parliament Hill in Ottawa on May 2, 2019. Premier Jason Kenney is rejecting opposition accusations he is putting vulnerable Albertans at risk by freezing funds for proposed new supervised consumption drug sites. (Justin Tang/CP)

Benjamin Perrin is a former criminal justice advisor to Prime Minister Stephen Harper. Currently, he is a law professor at the University of British Columbia. His upcoming book Overdose: Heartbreak and Hope in Canada’s Opioid Crisis comes out in late March, 2020.

Since 2016, over 14,000 people have died from opioid-related overdoses in Canada, including over 2,500 in Alberta. You would expect officials in the province to be marshalling the best available public health evidence to contain the loss of life. You’d be wrong.

A recently released review of supervised consumption sites (SCS) ordered by Premier Jason Kenney’s government claims the sites are causing increased crime, needle debris and social disorder. Unfortunately, the review is dangerously biased, methodologically flawed and explicitly ignores over 100 peer-reviewed studies on the benefits of SCS. Alarmingly, it is to be the basis for Kenney’s government to decide the fate of these sites (at least seven existing community-based SCS in Alberta, and two more proposed ones in Medicine Hat and Red Deer) on a case-by-case basis. If Kenney’s government moves ahead with curtailing the sites and ending needle distribution, the research tells us it will cost lives and increase transmission of HIV/AIDS.

Between January 2018 and September 2019, there were 307,793 visits to these seven existing community-based supervised consumption sites in Alberta: four in Edmonton, and one in Calgary, Lethbridge and Grande Prairie. Of these visits, there were 4,587 overdoses, all of which were reversed without a single death.

Soon after being elected premier, Kenney’s government announced a freeze on funding new supervised consumption sites. He tasked a hand-picked committee to review current and proposed ones. But the review was only mandated to consider their “socio-economic impacts” like changes in crime and impacts on local businesses. It was specifically mandated by Kenney’s government not to consider the merits of supervised consumption sites as a public health intervention.

Political commentators, physicians, criminologists, and public health experts, have all responded, recognizing the review as a deeply problematic and biased political document. Indeed, it is based in large part on cherry-picked comments by members of the public at public town hall meetings. Kenney’s review on supervised consumption sites wouldn’t pass peer review in any reputable academic journal. Criminologists and physicians have called for its retraction. Public health experts were aghast at how the report’s authors misconceive of even the most basic concepts such as, what an overdose is, and the proper medical response to one.

Even as Kenney’s review begrudgingly concedes “while there were no deaths recorded among people who used drugs at the SCS sites,” it goes on to identify as a concern that “death rates in the immediate vicinity of the SCS locations increased.” The review seems to imply that overdose deaths outside a supervised consumption site are the fault of the sites. Any reasonable observer in public health would conclude this is an argument for—not against—the sites. People inside the sites live; people outside them die.

MORE: Why Canada has so few supervised injection sites

If supervised consumption sites in Alberta are curtailed, people will die. This is clear from the peer-reviewed literature which concluded that in provinces like B.C. that have expanded SCS, the death count would be much higher without them.

The first graph in Kenney’s review depicts results from an online survey of “perceived change in neighbourhood safety after site(s) opening.” Criminologists have long debunked the correlation between perception and reality of crime—fear versus fact. Indeed, the Edmonton Police Service immediately responded to Kenney’s review, setting the record straight: “Our observations and data indicate that these facilities, collectively, have not increased crime or disorder in the surrounding community. We acknowledge the fact that lives have been saved.”

The “biggest issue” the review found was that people were concerned about debris in the vicinity of these sites, so it recommends an “immediate” end to needle distribution and moving to a needle-exchange model. Such an approach has been found to increase the risk of transmission of HIV/AIDS by 33 per cent. But again, his review isn’t interested in health outcomes, only community perceptions. Never mind peer-reviewed studies in other jurisdictions finding decline in debris around such sites. There are approaches to mitigate such concerns in any event.

Calgary Mayor Naheed Nenshi responded to Kenney’s review, saying the city needs more—not less—supervised consumption sites to help people, and believes that will help mitigate community impacts. Indeed, by only having one location in the sprawling city, it congregated a group of marginalized people who need this life-saving health service.

Kenney appears to be trying to use increased treatment funding on substance use as political cover for a crackdown on supervised consumptions sites. In announcing those funds, Kenney appears to be claiming credit for doing something positive, while taking the opportunity now to act on his long-standing opposition to SCS. The ploy is particularly problematic given a New England Journal of Medicine study found that people who regularly attend supervised consumption sites are 1.7 times more likely to enter treatment—and you need to be alive to enter treatment. We need both.