All the good politicians are in Montreal

Paul Wells: I used to wonder where all the politicians with heart and wit went. Turns out they’re in Montreal, trying to turn a parking lot into a place where people actually live. 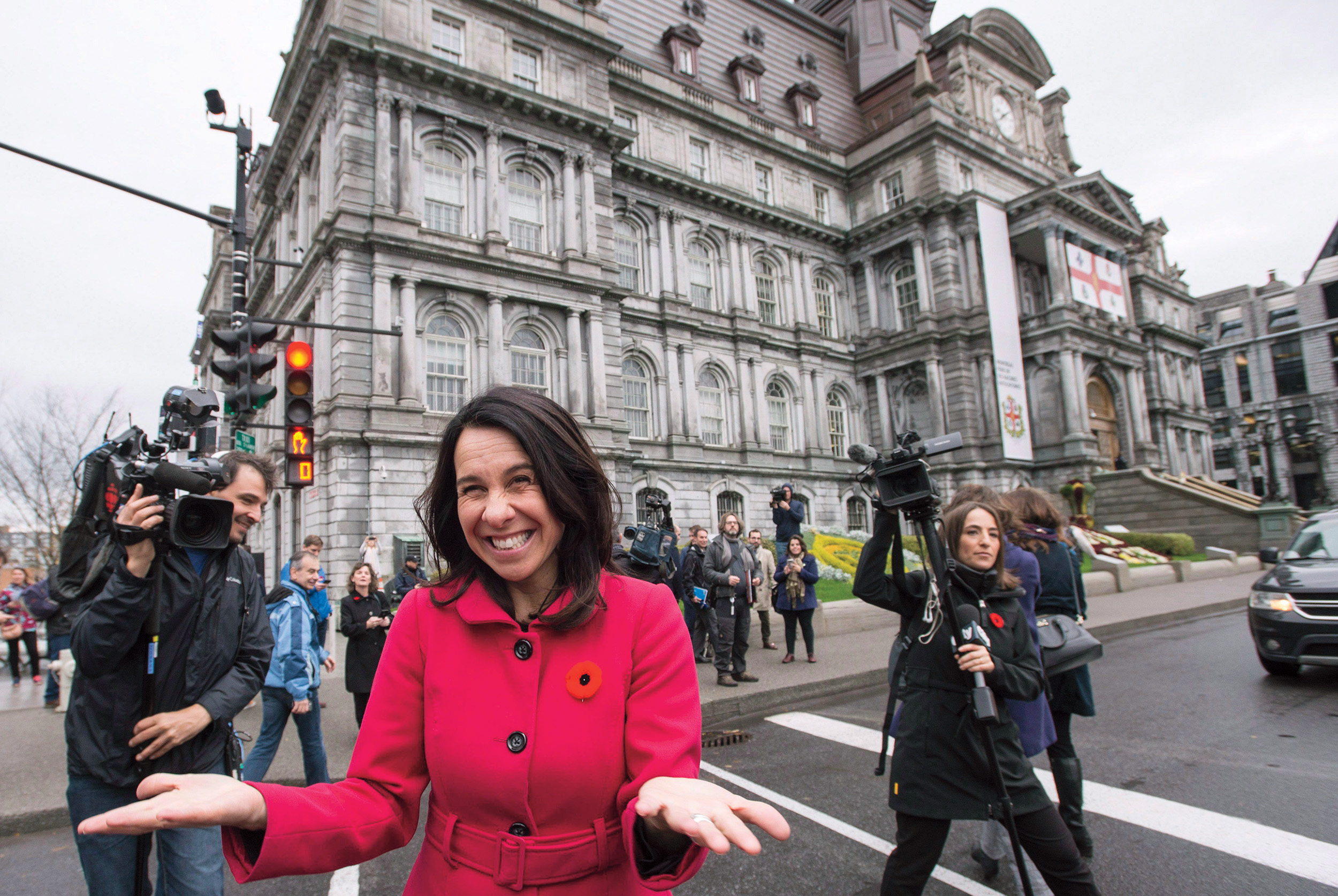 Plante leads a rarity in Montreal city politics: a party that existed before she came along and may yet outlast her (Paul Chiasson/CP)

One of my pet theories is that politics in Canada is fine. Just not at the federal level. And, sure, not always at the provincial level. But municipal politics will give you hope, at least often enough. In cities and towns, citizens can still mobilize to make a difference. They can build an alternative when the incumbents forget how to listen. Municipal politicians are less frequently rewarded for brute antagonism and blind loyalty than their more glamorous cousins in Parliament, so real debate and thoughtful give-and-take aren’t things of the past.

I don’t want to idealize things. Municipal politics can be uninspiring and ugly. Too often it can even be bought and sold. But in a lot of cities and towns, it doesn’t feel stuck. So it still feels worth doing.

Exhibit A, in this season of municipal elections, is Montreal, where the two leading candidates for the job of mayor will stage a rematch on Nov. 7. Denis Coderre you know. He was a utility player in the federal governments of Jean Chrétien and Paul Martin, jockeyed for advantage in the ever-shrinking Liberal party of Stéphane Dion and Michael Ignatieff, then got elected as Montreal’s mayor in 2013. At 58, Coderre is finally almost as old as he always seemed to be. He’s an old-school brokerage politician. He can work with anybody, until he gets tired of them. He commanded similarly fleeting allegiance from Montreal voters, who turfed him after one term in 2017. This year he’s trying for a comeback.

The woman who beat him once and hopes to do so again is Valérie Plante, mayor since 2017. She’s 11 years younger than Coderre, and cheerier. She leads a rarity in Montreal city politics: a political party that existed before she came along and may yet outlast her, a green, progressive, grassroots-driven party called Projet Montréal. To caricature, Coderre is in politics to be. The Projet Montréal gang is in politics to do. This corner offers no prediction about who will win.

But my gosh I’ve enjoyed finding out more about Projet Montréal, thanks to one of the most fascinating Canadian political books in an age. Saving the City: The Challenge of Transforming a Modern Metropolis is a long, detailed history of Projet Montréal and, more broadly, of city politics in Montreal since the 1970s. Its author is Daniel Sanger, whom I knew as a reporter for The Canadian Press when I lived in Montreal, too briefly, in the 1990s. More recently, Sanger worked as an organizer for Projet Montréal and, once it won office in a key district and then city-wide, as a senior staff member. He was fired a few years ago, in a way that left him with a bunch of good anecdotes and no reason to hold them back.

Saving the City combines the clear eye of a very good reporter with the insider access of a sympathetic partisan. Almost everyone in this story talked to Sanger, at length and with no filter. Almost all of them are keen students of others’ flaws, and reasonably happy to admit their own. For a reader in Justin Trudeau’s Ottawa, where everything is scripted euphemism, Sanger’s frankness, and that of his sources, is a tonic. I’ve always thought politics was about imperfect people chasing perfect goals, often badly, always with heart, and sometimes even with some wit. For the life of me, I’ve been wondering where those people went. Turns out they’ve been in Montreal.

MORE: Michael Wernick has some advice

Sanger’s main source is Projet Montréal founder and three-time failed mayoral candidate Richard Bergeron, “who’s brilliant and knows it, as warm as a block of ice and unable to get along with most members of his caucus, never mind the electorate.” (I should note that the English edition of Sanger’s book isn’t out yet, so I’m translating from the French edition. Treat these quotes as paraphrases.)

Basically, Plante comes along after it finally becomes impossible to ignore how bad Bergeron is at politics. But by then Bergeron has already accomplished a lot. In politics, a powerful idea doesn’t need a glamorous messenger, just as no amount of charm can long fill a vacuum.

Bergeron’s idea is simple: he wants to tilt Montreal’s urban balance away from cars and drivers, back toward pedestrians and neighbourhoods. Raised in an orphanage in small-town Chicoutimi, he becomes a Montreal taxi driver, drives every inch of the city’s arteries and back streets—and learns to hate cars. “A car is a machine for killing cities and building suburbs,” he says. He wants streetcars, which are cleaner and quieter than automobiles. He allies himself with the residents of the Plateau Mont-Royal, the ­middle-class residential steppe east of Montreal’s runty downtown “mountain,” who want a few main streets closed to all but pedestrian traffic.

READ: Montreal might have Canada’s most beautiful manhole covers

The new party builds out its agenda from that core. New recruits and supporters arrive at a steady pace. They’re driven, pretty reliably, by two things: first, by the fear that Montreal is becoming uninhabitable at street level. One guy discovers that when he brings laundry in off the clothesline, it smells like diesel fuel. Second, by a contemptuous response from incumbent politicians and city officials the first time they suggested doing things a different way.

In 2009, Projet Montréal wins control of the Plateau Mont-Royal district administration. Sanger goes to work for the district mayor, another key Projet Montréal figure. They diligently apply a detailed program, never worrying much about opposition: eventually the opponents are outnumbered by supporters. More than a decade after taking the Plateau, the party has never lost it.

The rest of the city, less boho go-gauche, is a harder sell. The party finally learns it can’t win on that larger scale without a charmer like Plante. She is slower to realize she can’t win without a dedicated grassroots movement like Projet Montréal. A lot of party faithful worry that she’s a parvenue who doesn’t share their goals. Many quit in dismay at what the party has become on its way to city hall. Sanger is surprisingly open about sharing these concerns. Just about everyone in the book meets moments of disillusionment, betrayal, dashed hope. Many have only themselves to blame.

In short, it’s politics, a word I intend as a compliment without pretending it’s ever a synonym for perfection. By the end, in the present day, Montreal feels less like a parking lot and more like a place where people live: ornery, flawed people who aren’t pretending to be anything more. From Ottawa, it looks like some tempting mirage.

This article appears in print in the December issue of Maclean’s magazine with the headline,“Imperfect people chasing perfect goals.”