America cuts off its supply chain to spite its face 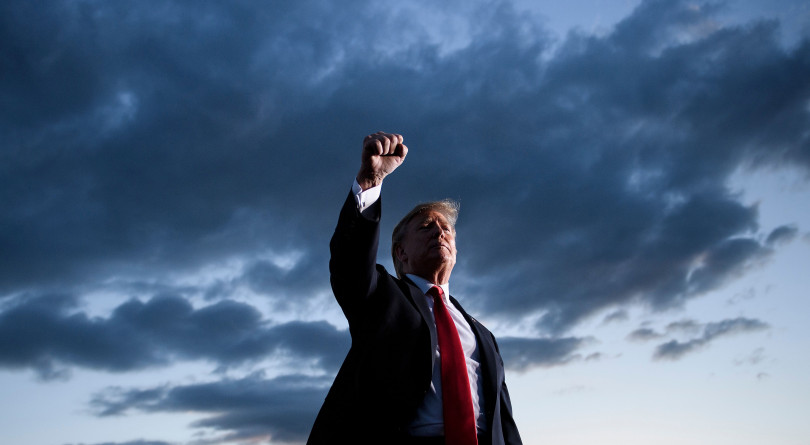 U.S. President Donald Trump holds up his fist as he leaves after speaking during a Make America Great Again rally at Williamsport Regional Airport May 20, 2019, in Montoursville, Pennsylvania. (Brendan Smialowski/AFP/Getty Images)

On Thursday evening, U.S. President and steel-slat barrier enthusiast, Donald Trump, up and announced, game-show style, that on June 10 a five per cent tariff would be imposed on Mexico “until such time as illegal migrants coming through Mexico, and into our Country, STOP. The Tariff will gradually increase until the Illegal Immigration problem is remedied,..”

Clarifying the president’s tweets (I believe this is now a course offered at Yale), the White House issued a statement saying, “If the crisis persists, however, the Tariffs will be raised to 10 per cent on July 1, 2019,” and then by an additional five per cent on the first day of each month for three months. The tariffs would stay at 25 per cent, the letter stated, and “if the illegal migration crisis is alleviated through effective actions taken by Mexico, to be determined in our sole discretion and judgment, the Tariffs will be removed.”

That’s not a trade policy, it’s an effortfully menacing letter from a lawyer with a hotmail account.

Trump said he is imposing the “Tariffs” under the International Emergency Economic Powers Act, which grants the president broad authority to both regulate commercial activity in the event of a crisis and to increase the nation’s proper noun output.

Who’s to say what exactly Trump thinks Mexico will be able do to stop desperate people, many of whom have travelled from Central America, from reaching the U.S. border at all, let alone in such a short period of time? I presume he imagines that whatever  “effective actions” Mexican authorities are forced to take, they will involve doing something worse than what his own administration is already doing. So, worse than putting children in cages—six migrant children in U.S. custody have died since September—and that while Trump does this imagining, he smiles.

The surest way to reduce migration is to improve the economies of the countries people leave, and the countries around those countries, in order to find work. The surest way to do that is through trade, not through a tweeted trade war. Trump’s move is the “beatings will continue until morale improves” of international relations.

Trump loves to conjure up the people coming to America—many seeking to legally immigrate, some of whom travel in groups for the safety that can offer—as an “invasion.” He campaigned on the misbegotten notion that these people are a menace of crisis proportions. He likes to use the word “caravan” because it’s both foreign and catchy and when, 30 years from now, Caravan! Is a splashy, heartwarming, smash-hit Broadway musical about coming to America, my only hope is that none of Trump’s children have the social cache to score tickets.

“Oh. It looks like they’re all spoken for again tonight.”

Trump, somewhat famously now, does not understand how tariffs work. At all. Tariffs are a missing piece of the global economics puzzle for Trump. It may well be off with all the other pieces.

RELATED: Stephen Poloz on taming the housing market and the dangers of a trade war

Some may recall it recounted in Bob Woodward’s latest book, Fear: Trump in the White House that, in the midst of a meeting at Trump Tower in November 2016, Gary Cohn, the former director of the National Economic Council, broached a number of economic issues, including the Federal Reserve, with Trump, telling him that the Fed would in all probability increase interest rates during his term. Trump then offered an idea of how to deal with the rising rates.

“We should just go borrow a lot of money, hold it, and then sell it to make money,” Trump said, the book recounts.

While it’s true that many private businesses do issue debt at a time of low interest rates, Cohn was, Woodward wrote, “astounded at Trump’s lack of basic understanding” about what it means when a government borrows in this manner.

After all, Trump ran on a promise to eliminate more than $19 trillion in federal debt “over a period of eight years.” And throw in a set of steak knives. Borrowing more money would of course, or at least it should be “of course,” after all it is right there in the word “borrow,” increase the deficit, and add to that debt.

When Cohn explained this to a man whose presidential campaign was predicated on the idea that he was the best at understanding money, the president-elect offered up a solution.

Cohn, no doubt screaming internally, suggested that would be bad for the fiscal and economic health of the country because—wait for it—printing vast amounts of money is generally considered an express route to inflation.

Trump came back to the idea later in the conversation, and this is a recurring theme in Fear. In fact the only direct quote I remember from the book is the oft-used “Trump repeated.”

“It was clear that Trump did not understand the way the U.S. government debt cycle balance sheet worked,” Woodward wrote, which is astounding in itself. But it’s tariffs that hold a unique place in Trump’s economic ignorance. Standing out in that crowd is a notable feat.

“Tariffs will bring in FAR MORE wealth to our Country than even a phenomenal deal of the traditional kind. Also, much easier & quicker to do,” he recently tweeted, working his way towards a box set of really stupid tweets about tariffs.

Trump labours, or more accurately watches TV, golfs, and tweets, under the misconception that trade deficits indicate that one country is being taken to the cleaners rather than just enjoying cheap washing machines. He also believes that tariffs are not just part of a nation’s arsenal in “Trade Wars” that “are good, and easy to win,” but that they are a big revenue generator for a country.

In Trump’s mind a tariff is the equivalent of every item coming into the U.S. paying a cover charge at the door, and so why not raise it? In fact, why not put a two-drink minimum on aluminum and steel, as well?

Tariffs are of course paid by importers who naturally pass those costs on to consumers. The U.S. just increased tariffs on $200 billion worth of goods imported from China and on Monday, China announced it would retaliate by putting tariffs on $60 billion worth of American products. But as Trump has said: “Tariffs will make our Country MUCH STRONGER, not weaker. Just sit back and watch!”

Yes, watch as Trump opens up a trade war on two and possibly three fronts.

According to recent census data, Mexico is close to becoming the United States’ largest trading partner, ahead of China and Canada, and according to Torsten Slok, chief economist at Deutsche Bank Securities, two-thirds of U.S. imports from Mexico are intracompany trade. Mexico is supplying parts that an American company uses to manufacture. What the world saw this week is America cutting off its supply chain to spite its face.

I do not think when most Americans went to the polls, there was an “Eight-dollar mangoes” option on the ballot. They might be surprised and even alarmed to discover that this is what they voted for. That’s where this Mexican-American trade war Trump has announced is headed.

That is, at the end of the day, what’s most alarming about the Mexico announcement. That agreement which I will always insist should have been called Afta’ NAFTA could have been a win for Trump.

“Sure, I’m scrapping with China, but look at the calm, normal trade agreement with America’s other largest trading partners that I hold in my perfectly normal, well-proportioned hands,” could have been Trump’s presidential moment for the month.

That he could not take the win, even if said win consisted mostly of restoring the status quo after a previous crisis of his own creation, says so much about Trump. He is always jonesing for chaos and being Trump it has to a particularly eighties style of chaos. We don’t need to go back there but he sure wants us to.

These are trade relationships, corporate and agricultural supply chains that have operated and matured without tariffs since 1994’s NAFTA was signed. Not everyone loved NAFTA but it was a classic that advanced a wholesome narrative: NAFTA was The Lion King of reciprocal trade agreements.

We didn’t really need a new one, but having gone through the trouble, we should give it a chance. Let’s at least see how it plays at the box office.