Amy Coney Barrett and the challenge of separating church and state

Michael Coren: America was founded on religious neutrality of its governance. For religious conservatives—even judges—it's an increasingly difficult position. 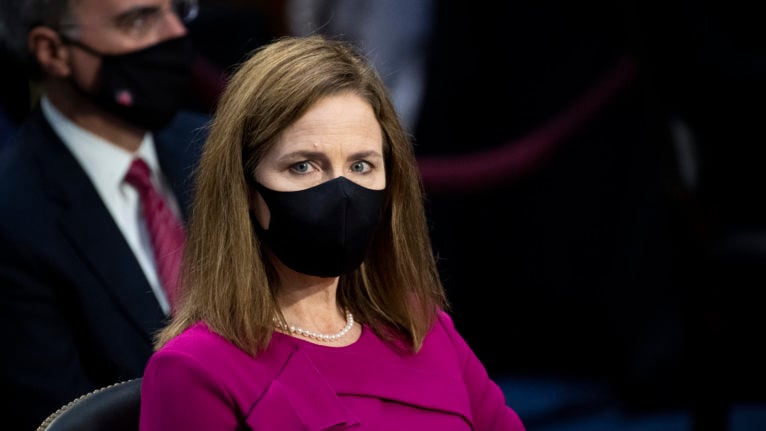 Supreme Court confirmation hearings for Notre Dame University law professor Amy Coney Barrett have just begun and it’s going to be a challenging time for the woman chosen by Donald Trump to replace the iconic Ruth Bader Ginsburg. The 48-year-old mother of seven has divided American politics, media and public opinion between those who see her as an angelic liberator from evil—quite literally sometimes, in that there are social media memes depicting her with heavenly wings—or a reactionary who will close almost every one of the doors for women and minorities that her predecessor fought to open.

The reason is that Barrett is a conservative Roman Catholic, and a member of a Catholic charismatic group with strong patriarchal and hierarchical leanings, and strongly opposed to contraception, abortion and equal marriage.

Barrett herself is regarded as a fine jurist, but her previous decisions, while often only indirectly touching on these hot button issues, have always been conservative. Which leads critics to speculate whether she will now judge as a Catholic or as a lawyer, for opponents to roar about separation of church and state, and for supporters to complain of anti-Catholic prejudice. Her case isn’t helped by the fact that she’d initially failed to disclose that she’d given two talks to student anti-abortion groups in 2013 and also signed a “right to life” advertisement opposing Roe V Wade.

It’s a deeply complex and layered issue but part of the problem is that many commentators assume that people of faith can leave their beliefs at the church or temple door. The truth, however, is that for a committed believer, religion informs everything said and done. From a personal point of view, I would find it impossible to expunge my Christianity from my politics; what I assume about the eternal is an integral part of my every waking moment, and I’m sure that it’s the same for Canadian politicians and U.S. judges.

The tragedy of all of this is that what are actually the genuinely central Christian issues—peace, social justice, care for the poor and marginalized—are seldom held up to public scrutiny, but the themes that are rarely if ever actually mentioned in scripture—abortion, homosexuality, contraception—take on a monumental significance, with abortion given a preeminent status by the Christian right.

In the case of Amy Coney Barrett, there will be a serious attempt by the pro-life community and its champions to reverse the Roe V Wade decision or reduce its consequences. And here’s what is challenging but inescapable. For those opposed to abortion, the act involves unlawful killing, even murder, and it’s not “an” issue but “the” issue. Do we expect the judge to ignore such visceral beliefs when she enters the chamber of the Supreme Court, or for a MP to do the same when present in the House of Commons?

Catholic Prime Ministers such as Brian Mulroney, Paul Martin and Justin Trudeau have certainly overseen progressive legislation concerning life and sexuality, but they were all on the more liberal wing of their church. That liberalism enabled them—just as it does Joe Biden—to embrace the notion that we not only can but must enforce the separation of church and state. As Martin said when he introduced legislation to legalize same-sex marriage, “My decisions were based on what do I believe is the right thing for the country.” That didn’t prevent many other Catholics, including clergy and even a prominent bishop, loudly criticizing him. It’s far more severe in the U.S., and earlier this month Fr. James Altmann, a Catholic priest in La Crosse, Wisconsin, posted a video in which he said: “You can not be Catholic and be a Democrat. Period. There will be 60 million aborted babies standing at the gates of heaven barring your Democrat entrance.” That video has been viewed more than half-a-million times and made Altmann a hero to conservative Christians.

That conservatism is far more active and engaged now than perhaps ever before, especially so in the U.S. but even in Canada. There is a view from its adherents that secularism, and what conservatives contemptuously describe as the “church of nice”, have had the upper hand for too long and that the time has come for a great reckoning. This permeates their writings and broadcasts and is the main reason that so many of them revere Donald Trump, while privately and often publicly acknowledging that he is a deeply flawed man and someone who hardly lives by Biblical principles!

As if to script, the Vatican recently delivered its most explicit critique yet of assisted dying, insisting that any form of it would “poison human society” and be “a crime against human life because, in this act, one chooses directly to cause the death of another innocent human being.” Politicians, judges and anybody else who enables this “act of homicide” are considered “accomplices”. In that euthanasia, in any form or title that it might take, is to be a recurring political and legal issue in the coming years, this will be extraordinarily difficult for Catholics in public life, and in particular for Amy Coney Barrett.

I cannot pretend that as a cleric or a journalist I have the answers to all this. Politicians should, ideally, state their views clearly and then trust the electorate to vote accordingly. No more Scheer squirms please. Those in government have a duty to serve all of the people but at the same time their consciences are partly if not largely formed by their faith. As for judges, and as for judges who may sit on the Supreme Court of a nation that was founded on the religious neutrality of its governance, I see some of them struggling between a rock and a hard place, the rock being that of St. Peter. This will lead to obfuscation, euphemism and shadow-talk. In all honesty, how could it not?