An environmental plan that takes people at their wallet, not their word

Andrew MacDougall: The Conservatives have offered up a cynical climate plan—will doing even less than Trudeau be enough? 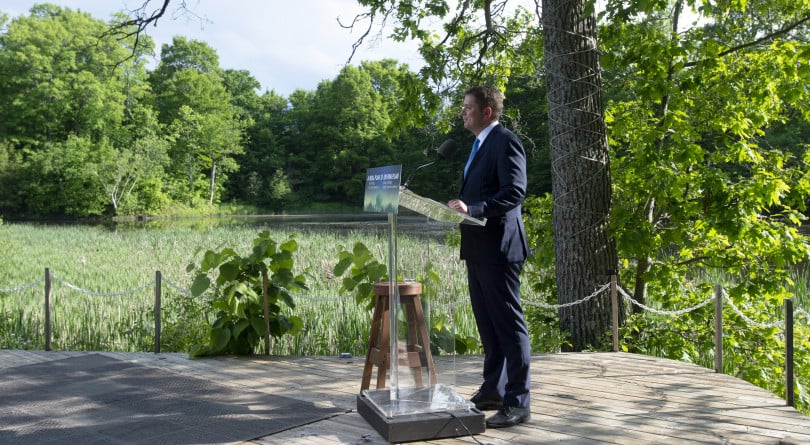 Scheer delivers a speech on the environment in Chelsea, Que., on June 19, 2019. (THE CANADIAN PRESS/Adrian Wyld)

Liberal climate plan that doesn’t do enough, meet the Conservative plan to do even less.

Now that Andrew Scheer has finally unveiled his “real plan” on climate change voters will at last have the chance to determine which plate of ‘not enough’ is more to their liking. That’s if they even care enough to bother doing the legwork of sorting through the competing plans.

Scheer has clearly made the calculation that doing even less than Trudeau is good enough for his immediate electoral purposes, if not the planet’s long-term prospects, as voters’ claims to be concerned about climate change have historically outstripped their desire to act, a worldview boosted this week by the release of yet another study showing Canadians still aren’t willing to put their wallets behind their words when it comes to the environment. Is the Conservative strategy cynical? Yes. Is it smart? We’ll see.

Despite the significant oxygen claimed by the climate change debate the threshold for personal action remains stubbornly high. Most people have no trouble saying they care about the environment; they do, however, have trouble translating those thoughts into any form of personal sacrifice. Call it Trudeau’s Dilemma, a problem the Prime Minister has chosen to solve by making everyday items like gas and groceries more expensive via a highly visible tax. It’s quite the gamble.

Of course, Scheer’s plan will also increase costs for Canadians, but it does so indirectly, which history shows us is the safer route for politicians if revenues are to be extracted from the general population. The reason the GST cut was so popular is because its savings were noticed every day, a dynamic the Liberals are about to experience in reverse as the daily costs of the carbon tax add up (even if they are eventually rebated).

If you believe the science of climate change you are faced with two plans that don’t do the climate business.

The Liberals will pretend this isn’t the choice; that the choice is actually between their real plan and the ‘fake’ plan put forward by Scheer. But what other word than ‘fake’ can you use to describe the Liberal plan that doesn’t get Canada to where the government says the country needs to be in order to stop global warming? Either you get the result, or you don’t. To put it in terms Trudeau would surely understand: “Try not! Do or do not. There is no try.”

The Liberal refusal to put their carbon tax at the $102 level the Parliamentary Budget Officer says it needs to be at in the applicable provinces to hit the Paris targets means the government is blowing smoke on their number one policy priority. They might believe in climate change more but there is no evidence they’re willing to level with Canadians as to what that belief will mean in terms of hard costs. It’s the kind of sleight of hand a voter can easily see through.

Less easy is the sleight of hand presented in the Scheer plan. By focusing some of his action overseas, the Conservative leader is cleverly playing into the sentiment that action at home matters less than action abroad, given Canada’s relatively minor contribution to global emissions. The focus on renewable technology plays into the same heuristic; most people don’t think a tax alone will save the planet.

The Liberals will argue their plan isn’t just a tax, but the past few years of frantic debate about carbon taxes in Canada has reduced their plan to just that: a tax. The Conservative line about the Liberals having a tax plan instead of a climate plan will cut through. It might even be one of the reasons Scheer is already better trusted to tackle the environment than Trudeau.

Of course, another big reason Trudeau is struggling on climate is his ownership of an expensive bitumen pipeline. It’s hard to convince the greenies you’re green when you’ve plonked billions down to make sure the world gets more Canadian oil. It might be the responsible thing for Trudeau to do but it leaves him dissatisfying two masters while pleasing none.

All of which should leave an opening for Green Party leader Elizabeth May, who is trusted much more than Scheer or Trudeau on climate. If the Greens can’t make hay now, while the sun is roasting the planet, they never will.

Are Canadians willing to accept the Greens’ planned 60 per cent reduction to 2005 emission levels by 2030 and zero emissions by 2030? Will they make the sacrifices necessary to eliminate all fossil fuel energy from the east-west energy grid by 2030? Will they support a ban on foreign oil, something that would push up prices across the country?

Given Canadians aren’t willing to pay the equivalent of a Netflix subscription as things stand now, May shouldn’t be holding her breath come October.

The election is likely to turn on other issues.