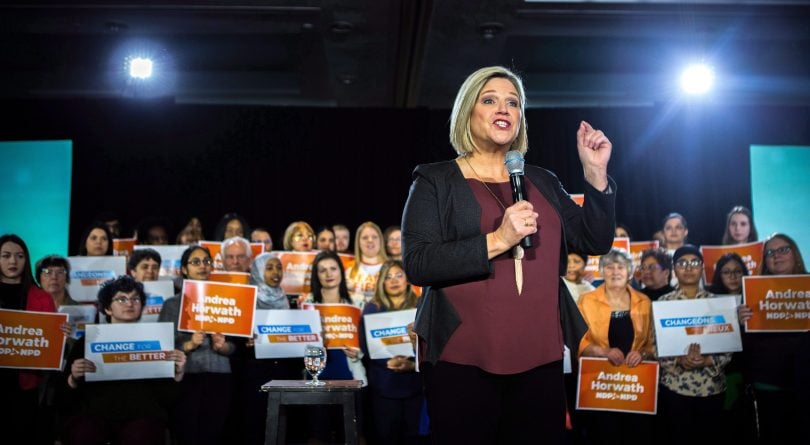 On June 7, when the ballots are counted and people look back at the important milestones of the 2018 election, Monday May 7 will likely stand out as an important date.

First, in the morning a poll showed her New Democrats in a solid second place—rising and with room to grow. That poll firmed up the view that this will be a change election. Then, in the evening at the City TV debate, the NDP leader went on to prove her point that, compared to Ford, Andrea Horwath is something completely different—a change for the better.

The morning poll was one of many that have shown Horwath’s NDP in second place. But none had yet shown such a small gap between Horwath and Ford or such a convincing lead by Horwath over Wynne. Pollara put the Ford PCs at 40 per cent, Horwath’s NDP at 30 per cent and Wynne’s Liberals at 23 per cent.

MORE: The first Ontario election debate: Such a nice bunch of people

But just as importantly, Pollara showed Horwath’s NDP with “a lot of room to grow,” according to Pollara’s owner, Don Guy, a former chief of staff to ex-premier Dalton McGuinty. And that room to grow reaches into both the PC and Liberal voter pools: Only 41 per cent of Liberal supporters wanted to see Wynne continue as Premier, while 46 per cent said their goal is to block Ford—a decision they may wish to re-evaluate considering a rising Horwath looks like a more effective block.

Similarly, 49 per cent said they were voting PC to get rid of Wynne. And now, if polls show Wynne out of the running and Horwath rising, these anti-Wynne voters might start to feel free to make a better choice.

Strategically, Horwath’s ability to grow at the expense of Ford means she’s his only real threat. And her appeal to Liberal voters means with their help she can start to make that threat real.

The dynamic also exactly fits Horwath’s often-repeated assessment of this campaign: that Ontarians are trying to figure out whether they should settle for bad or worse—but they don’t have to. And it exactly fits her offer to be something completely different, a change for the better.

When strategic reality and strategic rhetoric align, your campaign is on strong ground. On Monday night, Horwath went a long way to proving that about her campaign.

Over and over in Monday’s debate, Ford and Wynne blustered into futile blame-throwing that eventually devolved into noisy cross-talk. Rarely did they speak directly to voters or express empathy for the frustrations being raised—about police carding, public transit, substance addiction, housing, helping children with autism and more.

Ford, particularly in his closing, seemed unsure of himself. He spoke slowly, with a faint voice quiver, as if he was not sure which word was next in queue. It had all the markers of a presentation of lines that had been rehearsed—but not enough.

Wisely, Horwath mostly stayed away from the Ford-Wynne cacophony, throwing knowing smiles as the others argued—and giving some effective side-line jabs.

“This is the problem with Ontario right now, folks,” Horwath said at one point as Ford and Wynne bickered. And later: “while these two argue, our hydro bills are going through the roof.” Another zinger: “while Mr. Ford and Ms Wynne fight about who’s going to make the worse premier, I’m proposing something different.”

Horwath didn’t win the debate on the basis of sheer word count. But rather than race to confront Ford’s every word, Horwath was happy to deliver critical ideas. A couple times she managed to grab the camera’s attention, refocus on the issue and deliver some empathy to frustrated voters. Throughout, she acted in a way that’s consistent with how she says she sees this race.

The debate showed both Ford and Wynne are on very weak ground. On the issue of helping parents whose children have autism, both Ford and Wynne easily pushed each other back into mutual defeat. Remember that Wynne cut services to parents—a fact Ford was happy to point out. But Ford has also said insulting things about autistic kids, arguing against placing a group home in Etobicoke because “no one told me they’d be leaving the house.”

Horwath was completely different. She recognized the unfairness that some parents have had to sacrifice everything—even sell their homes and deplete their savings—to help their children. She stood her ground and promised to help.

Time after time, Ford found himself on weak ground, sunk by flip-flops, contradictions or insensitive comments. On the thorny issue of injection sites, it’s completely unclear where he stands. Originally, he opposed them; more recently, he said he’d “look at the evidence,” whatever that means. Ford chastised Wynne for putting cannabis shops too close to schools, yet has also argued for a deregulated Wild West for selling weed. In the debate, he claimed to support transit planning, yet in his time as a Toronto city councillor, he ripped up transit plans to replace them with drawings on napkins. Ford claimed to have saved money for Toronto, in fact, with his brother the former Mayor, he blew the big budget surplus he inherited, launched a new tax and increased city debt.

But Horwath zoomed in on Ford’s weakest ground a couple times, accusing him of “not having the guts” to say who his cuts would hurt. It could be emergency rooms. Or people’s dialysis. Or seniors’ care. Or autistic kids (again). Or transit. Or classroom size. Ford will say he’ll give away billions more in corporate tax cuts. He won’t say where the billions will come from. Funny, that.

Bad and worse—or a change for the better. Monday may have been a milestone because, in the polls and her debate performance, Andrea Horwath proved her interpretation of Ontario’s political situation is accurate. And like water that flows from a high source, it is very hard to stop the progress of someone who has the right strategic read of the situation.

MORE ABOUT THE 2018 ONTARIO ELECTION: