Heidi Matthews: When it comes to the blockades and protests, Conservative leaders are invoking the idea of the 'outside agitator' to delegitimize and break the bonds of activist solidarity 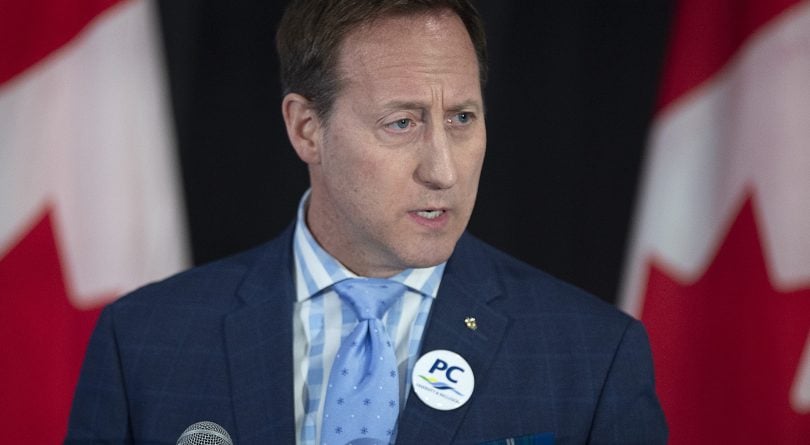 Peter MacKay addresses the crowd at a federal Conservative leadership forum during the annual general meeting of the Nova Scotia Progressive Conservative party in Halifax on Feb. 8, 2020. (Andrew Vaughan/CP)

Heidi Matthews is Assistant Professor at Osgoode Hall Law School at York University where she co-directs the Nathanson Centre on Transnational Human Rights, Crime and Security. Her research focuses on international criminal law and law and sexuality.

In recent days, public discourse around blockades in solidarity with the efforts of Wet’suwet’en hereditary chiefs to halt the construction of the Coastal GasLink pipeline on the Nation’s traditional territory turned particularly ugly. In attempts to whip up public hostility and force an end to the protests, both official opposition leader Andrew Scheer and Peter MacKay, who is vying to replace him, turned to civil-rights-era racist stereotypes. Invoking the spectre of the “outside agitator,” they sought to delegitimize the involvement of non-Indigenous protesters in order to break the bonds of activist solidarity that can be so crucial in creating the political will to address the conditions of inequality and oppression that underlie civil unrest.

In Parliament on Feb. 18, Scheer  described solidarity protesters as a “small group of radical activists” who are “appropriating an Indigenous agenda which they are wilfully misrepresenting.” He asserted that they “have little-to-no connection to First Nations communities” and have the “luxury of not having going to work everyday” and “of not facing repercussions for skipping class.” Later that day MacKay released a video in which he described activists as a “small gang of professional protesters and thugs” and “agitators” who are “holding innocent Canadians hostage.”

MORE: The Wet’suwet’en are more united than pipeline backers want you to think

The figure of the rabble-rouser who penetrates the boundaries of local communities to instigate unrest is, of course, far from new. The “outside agitator” was central to the race- and red-baiting rhetoric deployed against civil rights protesters during the 1960s. During that time, conservatives spread the theory that small groups of criminals, who included both white activists (many of whom were Jewish) and “deviant” Blacks, infiltrated African-American communities in both the north and the south in order to foment unrest. As then-president of the West Virginia State Bar Association, William C. Beatty put it, civil disobedience was the result of “mob action tailor made for those few malcontents who desire the total breakdown of organized society.” Often portrayed as players in a communist conspiracy, these outsiders were presented as acting not in the interests of African Americans, but to further their own ulterior motives.

This outside agitator thesis was quickly shown not only to be inaccurate, but also the result of racist thinking. In 1968, the National Advisory Commission on Civil Disorders found the “typical rioter is not an outside agitator or itinerant vender of violence,” but rather “a young, frustrated, alienated black American.” Additionally, a 1969 study of middle-class white attitudes toward African Americans in the aftermath of the Watts Rebellion in Los Angeles found a sharp divergence between whites who believed that the unrest was caused by communists or outside agitators, and those who believed that systemic oppression of and discrimination against African Americans, were to blame. Strikingly, whites who believed the outside agitator explanation lacked previous social contact with African Americans, suggesting ignorance and a lack of empathy for the legitimate grievances of the Black community. Unsurprisingly, this group was more likely to favour punitive measures as a response to civil unrest.

And yet, the racist trope of the outside agitator persists. In the aftermath of Hurricane Katrina, white vigilantes justified their violence against Black storm victims on the basis that they invaded neighbourhoods for criminal purposes. And in 2014, police officials and politicians alike wrongly placed responsibility for unrest in Ferguson, Missouri at the feet of outside instigators. Now, Scheer and MacKay’s statements have brought this pernicious discourse to Canada.

MORE: These protesters know more about Indigenous issues than their detractors claim

To be sure, the American history of slavery, Jim Crow, and the contemporary legacy of anti-Black racism are distinct from Canada’s history of Indigenous oppression and its ongoing race-based genocide of Indigenous peoples. And while there is rarely consensus within social justice movements about tactics, disruption of building sites and transportation infrastructure, all of which figure prominently in Black Lives Matter and contemporary Indigenous activism, they have long been central to the civil rights and Red Power movements.

In 1963, Black Power labour politics shutdown construction sites across urban centres, costing developers and white workers millions. Blocking traffic on bridges and highways, beginning with Martin Luther King Jr.’s occupation of the Edmund Pettus Bridge in Selma and continuing today, is a particularly symbolic and effective form of protest: it physically interrupts business as usual and draws attention to the way in which highways were used to clear slums and effect segregation.

Railway blockades follow a similar logic. The construction of cross-country rail lines was central to dispossessing Indigenous peoples of their land and traditional ways of life in both Canada and the United States. Like highways through urban, Black communities, railways allow settlers to conduct their daily lives on Indigenous lands without having to confront their ongoing impact on Indigenous communities.

Conservative calls to enforce the “rule of law” and shut down the Wet’suwet’en solidarity railway blockades are part of a cross-border attempt by extractive industries to restrict freedom of expression and the right to protest. When Scheer and MacKay appeal to the outside agitator, they are taking the words out of the mouths of American lawmakers in South Dakota, who recently passed a new Riot Boosting Act as a punitive response to the Standing Rock protests against the Dakota Access Pipeline. According to Governor Kristi Noem, the Act, drafted in consultation with then-TransCanada Corp., targets “out-of-state rioters funded by out-of-state interests.”

When Scheer alleges that the solidarity protests are “a warm-up act for… the next fights against Trans Mountain (pipeline)” he leaves out that corporations in the extractive industry, including TC Energy, have moved well beyond the “warm up” stage and are actively testing the legal limits of their efforts to shut down legitimate dissent. Yesterday, Erin O’Toole, who is also in the running for the conservative leadership, expressed his intention to specifically criminalize blockades and disruption of “critical national infrastructure” as tactics of civil disobedience.

Invoking the outside agitator in order to delegitimize Wet’suwet’en solidarity actions is particularly harmful because it makes the authenticity of political claims contingent on local connectedness in order to frustrate non-Indigenous allyship. This discourse flips social justice language in the service of conservative ends. When Scheer says protesters are “appropriating an Indigenous agenda” and should “check their privilege,” he is trying to silence, rather than amplify Indigenous voices. On this logic, law-abiding and hard-working Canadians cannot legitimately support Indigenous political goals because they are located outside Indigenous traditional territory. Conversely, First Nations’ claims cannot be heard when voiced by hereditary chiefs; instead, they must be filtered through the colonial governance structures imposed by the Indian Act.

However, as Pam Palmater notes, the blockades “are about more than pipelines—they are about…bringing attention to the ways in which Canada criminalizes Indigenous peoples for peacefully living, asserting and defending our sovereignty over our lands.” In other words, they are about disrupting the spatial ordering of the Canadian state that has been designed to tolerate various forms of Indigenous jurisdiction and self-governance at the expense of national self-determination and sovereignty. If reconciliation is to mean anything at all, it must begin with settler Canadians—what Martin Luther King Jr. calls the “white moderate”—understanding this fact.