Andrew Scheer needs to tell Maxime Bernier: put up, shut up, or get out 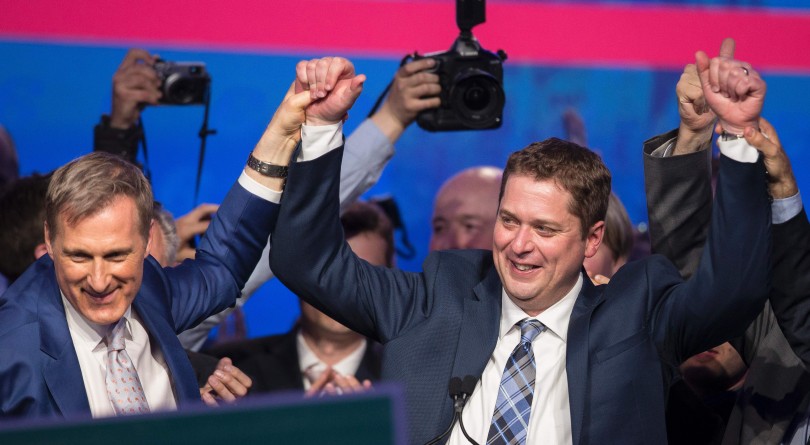 Andrew Scheer, who had just been elected as leader of the Conservative Party of Canada, celebrates with his rival Maxime Bernier (left) at the party's convention in Toronto, Ontario, May 27, 2017. (Geoff Robins/Getty Images)

Having spent three long months bound and gagged since accusing his leader of being bought and paid for by Big Dairy, we were past due for another Beauce-zo eruption.

And so it came on a Sunday summer night when Maxime Bernier took to Twitter—the world’s best forum for reasoned debate—to expound on how much diversity is good for Canada. (Answer: not “ever more”.)

Bernier was ostensibly responding to some harmless “Diversity is what makes Canada strong” twaddle from Prime Minister Justin Trudeau, the kind of sweet nothing that Trudeau coos every day of the week and twice on Sundays. In reality, Bernier was responding to the urges of his considerable ego, which still hasn’t come to grips with the fact that he came off second-best to the smiley milk-loving bloke from Regina.

What gives? And why now? After all, it’s not like anyone is talking about the challenges of integration. What, other than ego, is behind Bernier’s apparently unrestrainable need to unburden himself?

Whatever the case, Andrew Scheer needs to sit down with his caucus mate and hammer out a solution, even if that solution ends up being so long, farewell, auf Wiedersehen, good night.

A good place for Scheer to start the conversation would be with a history lesson. As Erin O’Toole noted in his Twitter riposte to Bernier: “Canada’s first Chinese, Greek, Ukrainian, and Japanese MPs were Conservatives. Canada’s first Korean, Pakistani, Filipino and Vietnamese Senators were also Conservatives, as were our first black, Sikh, Innu, and Inuk cabinet ministers and our first Muslim and Hindu MPs.” And then there’s Diefenbaker’s “Bill of Rights” and Mulroney’s Multiculturalism Act, etc.

O’Toole’s point: The Conservatives have a hell of story to tell on diversity, and certainly a much better one than the one they expressed in the last election through barbaric cultural practice tip-lines or burqa-mongering. And, for that matter, they have a great story about how much diversity is good for Canada, especially with respect to how new Canadians bring entrepreneurship and skills for an economy that is soon to be short of many of them.

Not that Bernier will be chastened by the hubbub his words have provoked. He never is. The acolytes whispering in his ear don’t see the world the way O’Toole does.

But Bernier is a smart man. It shouldn’t take much thinking to see what a dead end his road turns into.

Would an early 20th-century version of Bernier have railed against the clusters of Ukrainians dotted across the Prairies? Would a 1950s or 1960s version have taken issue with the “papist” Italians or orthodox Greeks in places like Toronto and Montréal speaking their home languages? Or the Mandarin speakers in Richmond and the Greater Toronto Area in the 2000s? Multiculturalism just takes time to work. Within a generation, the diversity Bernier is fretting about will be sitting in the Parliament of Canada. That surely can’t be what he’s worried about?

But these groups gaining political presence and power and acceptance isn’t a guarantee. It takes effort. And integration happens fastest when arms are put around a community, not when it is pushed away, or cast under suspicion. He’ll plead otherwise, but Bernier’s musings weren’t designed to ease concerns about an emotive subject. If Bernier had a concrete concern about a specific community, he should have raised it, not let his comments hang over every community.

Conservatives should leave the identity politics to the Liberals. Conservatives do better when they speak to new arrivals the same way they speak to all Canadians: the importance of rewarding hard work with low taxes, supporting families, and getting tough on crime. This was the Stephen Harper-Jason Kenney formula as the Conservatives went from minority to majority government with the support of immigrant communities, and it should be the Conservative formula now.

This doesn’t mean Conservatives need to avoid sensitive subjects like immigration or migration. But they need to be real issues, not theoretical concerns like the burqa or those tossed off by Bernier in his thread.

READ MORE: Why the explosive debate over Syrian refugees will likely define the next election

And it’s telling that the people who are most angry at Bernier for his intervention are his own ostensible teammates. They know how harmful loose talk on this subject can be to their electoral cause. And as immigration critic Michelle Rempel noted in her own response to Bernier, the Conservative Party has important work to do right now holding the government to account on illegal migration (a big issue in Bernier’s home province of Quebec), and freelancing of Bernier’s sort only makes that work harder, as it gives the Liberals a way to question Conservative motives on the broader question of immigrants.

There is nothing more frustrating than having your good work thrown away by a guy who has zero responsibility in holding the government to account. And if Maxime Bernier wants someone to blame for that, he need only look at the man in the mirror, having lost his critic post for his earlier anti-Scheer broadside.

Having busted Bernier down to private, Scheer has no disciplinary card left to play other than ousting Bernier from caucus. And while no leader ever wants to play it, letting one of your charges get away with speaking out of turn only embitters and emboldens the others.

READ MORE: What is Stephen Harper up to these days?

At some point, Scheer is going to have to play the heavy. Harper did it with the anti-abortion and anti-gay marriage crowd. He did it because that kind of tough love actually kept the tent broader to people who weren’t diehard conservatives. This is also Scheer’s challenge—this time with Bernier’s libertarian fringe. There is room for new ideas, but only if they’re brought forward responsibly, not tweeted out into the fan blades of the Internet and splattered all over the walls. If Bernier doesn’t like the current policy and won’t work within the proper channels to change it, then he should consider making a change himself.

The other losing Conservative Party leadership candidates have all managed to bury the hatchet with Scheer in service to the party, or in Kevin O’Leary’s case, resumed his normal service of ignoring Canada. Bernier should do the same and harvest his talents and ideas to help the party he had wanted to lead.

If he can’t, Bernier should have the courage of his convictions and quit the party and sit as an independent. And if he won’t, Scheer should give him the boot.

The job of MP for Beauce is Bernier’s for as long as he wants it. If he wants a bigger job, he should have the stones to tweet about that openly, and not waste everyone’s time being cynical about problems that don’t exist.