Stephen Maher: The Tory leader will face many tests as he tries to win over middle-of-the-road voters. Michael Cooper's eruption may be his first. 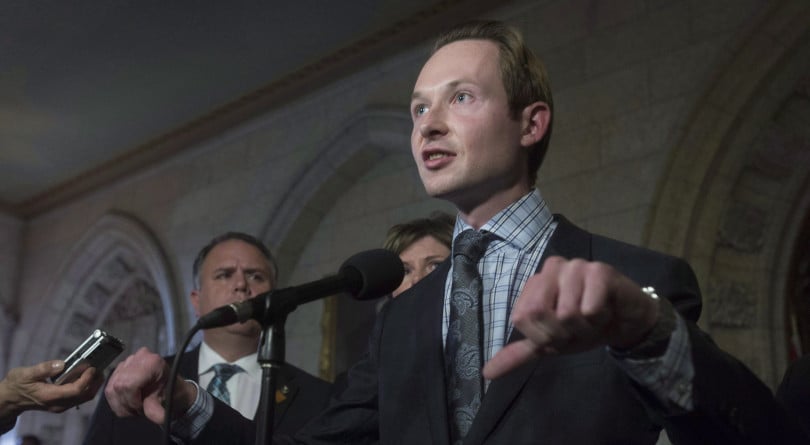 Cooper talks to reporters after Question Period in the House of Commons, on Oct. 6, 2016 (THE CANADIAN PRESS/Adrian Wyld)

Andrew Scheer stands a pretty good chance of winning the election in October, but before anyone calls him prime minister he will have to pass through a gauntlet of critics who will try to convince voters that he is too extreme to be trusted.

To ward off those attacks, Scheer will have to sound reasonable and look firm in dealing with social conservatives and bigots in his party. It will not be easy.

The leader of the official opposition almost always looks weak, as Scheer sometimes does, because they have few carrots to hand out and they can’t credibly wave a stick around to keep supporters in line.

In addition to the structural weakness built into the job, Scheer also has to try to stand out on a stage crowded with right-wing rivals.

Doug Ford and Jason Kenney are chewing up scenery in the middle of the stage; Stephen Harper continues to play a big role behind the scenes; and Maxime Bernier is loudly offering a populist alternative to the knuckle draggers in the front row.

So Scheer, in addition to convincing middle-of-the-road Canadians that he is moderate and personable enough for the job, also has to make sure that he, and not one of those other personalities, is the real leader of Canada’s angry white men.

It’s not easy, but it is not supposed to be easy to become prime minister, and Scheer can count himself fortunate that he even has a real shot, given the long history of Canadians giving majority prime ministers a second mandate.

But things have not been going well for Justin Trudeau, and many Canadians—in particular, women—are considering their electoral options. That doesn’t mean they will vote for Scheer, though. There will be a lot of talk about racism, abortion and climate change from people who despise him before Scheer walks onto a blue stage to concede defeat or claim victory on election night.

To make it harder for his critics to define him, Scheer has been giving speeches outlining his vision for the country. In his most recent, he spoke strongly against racism, something he has been under pressure to do, given his party’s links to the haters at the Rebel.

I thought Scheer made a pretty good case. “I believe that we are all children of God,” he said. “And therefore there can be no inferiority amongst human beings. And that equal and infinite value exists in each and every one of us. I find the notion that one’s race, religion, gender or sexual orientation would make anyone in any way superior or inferior to anyone else absolutely repugnant. And if there’s anyone who disagrees with that, there’s the door. You are not welcome here.”

Given that Conservatives are much more likely to be hostile to non-whites than the supporters of other parties, and the fact that Bernier is offering a less-politically correct alternative, Scheer must handle this kind of question carefully.

I don’t doubt that Scheer is sincere about this, but it is fair to note that the seats that he needs to win—in suburban Ontario—are so multicultural that he can’t afford to be seen as soft on racism.

From now until election day, Scheer will face repeated tests, decisions about how to deal with candidates and supporters who make racially insensitive comments.

He faced one such challenge this week. On Tuesday, at Justice committee hearings into hate speech, Conservative MP Michael Cooper denounced witness Faisal Khan Suri, a Muslim from Alberta who pointed out that the people who shoot up mosques often appear to have been inspired by radical commentary from right wingers, which is as plain as day.

It offended Cooper to have this pointed out to him, though, hearing a partisan attack where none was intended, and he got angry.

“I certainly wouldn’t attempt to link Bernie Sanders to the individual who shot up Republican members of Congress and nearly fatally killed congressman (Stephen) Scalise,” he fumed. “So you should be ashamed.”

To prove his point, Cooper then read from the manifesto written by the terrorist who gunned down 50 Muslims at prayer in New Zealand.

The terrorist document that Cooper read from is purposely misleading, influenced by the online culture of racist trolls, and the fact that Cooper cited it as an authority suggests that he is naive or something worse.

If Scheer is serious about showing racists the door, he could start by telling Cooper to apologize for insulting Suri and repeating terrorist propaganda in the House of Commons.