Matt Gurney: For the overwhelming majority of Canadians, climate change is not their top concern and that's why it's still missing from the Conservative election plan 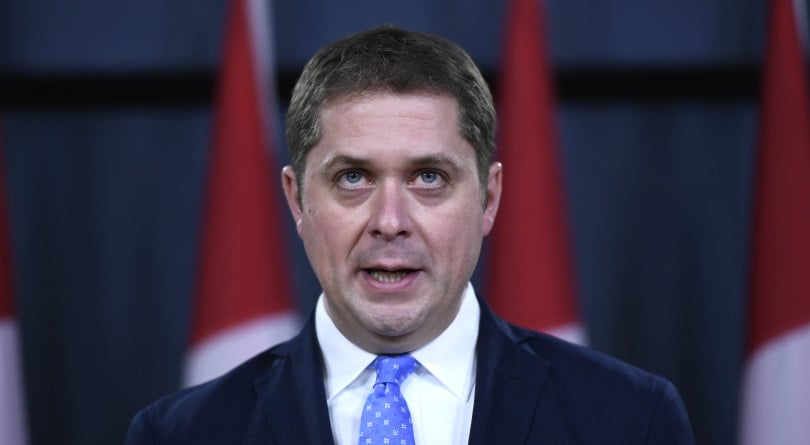 Scheer speaks during a press conference at the National Press Theatre in Ottawa on Sunday, April 7, 2019. (THE CANADIAN PRESS/Justin Tang)

This may put me offside with some of my learned columnist colleagues, but I’m not convinced Andrew Scheer has to do anything more on the issue of climate change than say, “It is bad, and we’ll find a way to do our part.”

He won’t win many friends on op-ed pages or on social media with that kind of attitude, but he doesn’t need them in order to win this fall. He just needs to win over, you know, voters.

Over the last few weeks, as the SNC-Lavalin scandal finally seemed to begin fading away, I’ve been watching with interest to see what the federal Liberals pivot to. The preferred issue seems to be climate change—and Andrew Scheer’s delay in announcing what his plan for dealing with it will be. After a rough few months, the Grits’ seizing on climate change, particularly with Alberta’s Jason Kenney and Ontario’s Doug Ford as foils, is logical.

But will it actually work? Is climate change an issue Canadians care enough about to decide an election on?

My fellow pundits seem to think that yes, it’s a big deal. Andrew Coyne, writing in the National Post last month, savaged the Conservatives (federally and provincially) for their opposition to carbon taxation, writing, “What might have been a choice between regulation and carbon pricing has instead become a choice between regulation-plus-pricing, on the left, or regulation-only, on the right: between needlessly-costly and maximum-costly.” Chantal Hebert, in the Star, noted the irony of the the long-delayed reveal of the Conservative climate policy being delayed further by massive flooding in eastern Canada. She also warned the Tories that polls show Canadians are engaged with environmental issues, particularly those relating to climate change.

READ MORE: It’s time for Andrew Scheer to get serious

But the most impassioned argument for a more-engaged (or existent) Conservative climate change plan came from Stephen Maher, right here in Maclean’s.

“Scheer is misleading Canadians about the most important issue we face, to discredit a policy that offers the best chance of reducing emissions,” he wrote. Maher added further that climate change is the most important issue of our time. “We have been fouling our nest with full knowledge of the consequences,” he said. “The ghost of climate future is so awful—a world of suffering and loss, with increasing crime, war, terrorism and mental illness—that the scientists who work on the issue have to be treated for depression.”

Colour me unconvinced that an aggressive position on climate change is going to be Andrew Scheer’s path to power.

I’ll agree with my colleagues as far as this—the Conservatives are going to need something on climate change in their platform. It’s an important enough issue to a large enough segment of Canadians that a total absence would be a problem. But it’s not at all clear that any Conservative climate plan needs to do anything more than check two boxes: it’s in the campaign platform and can be cited when needed, and it’s at least semi-plausible. It probably doesn’t need to be as ambitious as the Liberals’, or able to stand up to more than glancing scrutiny. It need not even rise to the level of Maher deeming it a serious plan.

Because, while Hebert is right to note that Canadians say that climate change is an important issue, they don’t quite seem to consider it the emergency (economic or existential) that columnists do. Abacus recently published numbers showing that 27 per cent of voters are “extremely” worried about climate change. Another 56 per cent of Canadians are “very” or “quite” worried. This is a super-majority of voters: 83 per cent. But only 12 per cent of Canadians identified it as their top issue—more than half of the people who are “extremely” worried are still more worried about something else.

And that’s absolutely fascinating. If the worst-case scenarios regarding climate change are accurate, we’re talking an existential threat to the human race. Four-fifths of Canadians are dialed in on this issue. But only 12 per cent rank it as their top priority. Stop and think about that for a moment: Four out of five Canadians are worried about something that could radically alter life as we know it, but seven in 10 still pick something else as their number one issue!

There’s a lot more in those Abacus numbers; they’re worth taking a look at. But contra my colleagues, I don’t look at them and see proof that a come-to-climate-Jesus moment is needed for Andrew Scheer. Climate change is not the top issue for an overwhelming majority of Canadians, and previous work by Abacus has shown that pocketbook issues still rank higher on Canadians’ list of concerns. Whatever concerns people may have the future, they still tend to worry about today first.

If the Tories can beat the weakened Liberals on concern over a rising cost of living, on housing affordability, on income inequality, they don’t need much of a carbon plan to start assembling a workable voter coalition that delivers a majority government—which polls show they’re already in striking distance of, anyway.

That’s not to ignore the moral arguments in favour of the Tories getting aggressive on climate change, or the fact that a carbon tax was originally seen as a small-c conservative solution to the problem. But the Conservatives are politicians, as are their opponents. Their business is winning elections by picking their key issues. Climate change may be it for columnists. But it doesn’t seem to be for the rest of us.