'Animal' instinct: The slippery slope of dehumanizing any group of people

Opinion: Donald Trump called the MS-13 gang 'animals'—and this tendency to describe an out-group of people in zoological terms can have nefarious consequences 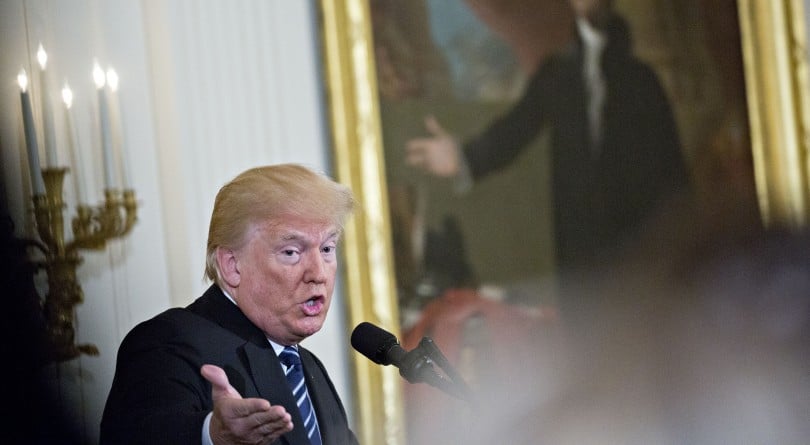 U.S. President Donald Trump speaks during a prison reform summit in the East Room of the White House in Washington, D.C., U.S., on Friday, May 18, 2018. The White House is holding the event to discuss federal prison reform and is encouraging Congress to act swiftly to support this issue to "reduce crime, protect communities and save tax dollars." Photographer: Andrew Harrer/Bloomberg via Getty Images

This is how it always begins.

Last week, during a White House roundtable discussion on California’s “sanctuary” law, Sheriff Margaret Mims spoke up about the bureaucratic challenges of sharing information with Immigrations and Customs Enforcement (ICE) in dealing with dangerous criminals, including members of the violent MS-13 gang. “Now ICE is the only law enforcement agency that cannot use our databases to find the bad guys,” she said. “They cannot come in and talk to people in our jail, unless they reach a certain threshold. They can’t do all kinds of things that other law enforcement agencies can do. And it’s really put us in a very bad position.”

President Trump took this as an invitation to add his brand of nuance to the conversation, which was, as always, executed with the grace and dexterity of a Maori side-step.

“We have people coming into the country, or trying to come in—and we’re stopping a lot of them—but we’re taking people out of the country. You wouldn’t believe how bad these people are. These aren’t people. These are animals.”

In response to the immediate backlash, the White House issued a press release entitled “What You Need to Know About the Violent Animals of MS-13.” The release described cases involving stabbings, rape, and decapitations allegedly committed by members of the gang, and peppered the word “animals” throughout, as if testing the reader’s conscience by daring them to not use the word themselves.

We’ve seen this before. The tendency of bigots, tyrants, and their intellectual accomplices to describe an out-group of people in zoological terms dates back centuries, and it’s always evident while crimes against humanity are underway. It was there when Spanish philosopher Juan Ginés de Sepúlveda argued that the anthropological gulf between Spaniards and Indigenous Caribbeans was as wide as that between monkeys and men—“you will scarcely find even vestiges of humanity in them”—while Spain was, at the time, slaughtering its way across the New World. It was there when Danish Nazi propaganda depicted Jewish people as a plague of rats while the country engaged in Europe’s latest pogrom. And it was there when Rwanda’s RTLM broadcasts compared Tutsis to cockroaches not long before beginning machete warfare. We’ve pledged over and over to never make this unacceptable mistake again—but here we are anyway.

This time, according to Trump apologists, things are different. This time, we’re not talking about innocent people being demonized—we’re talking about “gangbangers.” MS-13 gang members have, after all, committed horrific crimes that require condemnation in the strongest terms; calling them “animals” isn’t enough, said Trump spokeswoman Sarah Huckabee. To split hairs over their humanity is to risk giving the high ground to drug traffickers and brutal murderers. It is not the hill we should die on, they say.

The problem is that dehumanizing the lowest members of the perceived low races is where bigots consistently jam their foot in the door, and where systemic racism always manages to infect policy. In the 1990s, after sensational myths about crack babies and their drug-addicted mothers seized the American national consciousness, criminologist James A. Fox and political scientist John J. DiIulio Jr. promoted the concept of the “super-predator,” which were typically Black youth whose primal anger and chemically altered impulse control threatened to spark cataclysmic waves of violent crime.

The myth gave police the cover to follow New York Police commissioner Bill Bratton’s “broken windows” policing concept, accelerating the pace at which already overpoliced communities of colour were coffled into the penal system. It also turned lawmakers over to their most reactionary impulses, drafting mandatory minimum sentencing laws like the “three strikes” policy designed to keep prisons filled.

Right now, that foot in the door is already being used to pry it open, exposing Latin Americans (including those with legal status) to state and individualized violence. While Immigrations and Customs Enforcement touts itself as the frontline in the war against Mexican gangs, the agency has forged a reputation as the worst possible embodiment of the police state.

Just last year, ICE arrested Daniel Ramirez Medina, who came to the U.S. as an undocumented child and was a beneficiary of the Obama administration’s Deferred Action for Childhood Arrivals program. He was arrested without cause, held in an immigrant detention centre and, according to the evidence before U.S. District Judge Ricardo S. Martinez, ICE agents falsely claimed that Ramirez was gang-affiliated, allegedly even altering a petition document to erase a portion where Ramirez reiterated that he did not have such an affiliation. Judge Martinez blocked the deportation proceedings, ruling that ICE could not revoke Ramirez’s DACA enrolment, and that the agency must stop asserting that Ramirez has gang ties.

This kind of thinking by the country’s leaders and enforcement agencies ultimately filters down into the behaviour of  individuals. Last week, a video of New York lawyer Aaron Schlossberg went viral, in which he yells at Spanish-speaking staff and customers at a neighbourhood Fresh Kitchen for “speaking Spanish to customers when they should be speaking English.” “My guess is they’re not documented, so my next call is to ICE to have each one of them kicked out of my country….I pay for their welfare, I pay for their ability to be here.”

“My” country. “Their” welfare.

Schlossberg was later tracked down by local reporters and his history of racialized harassment was made public. Later still, his office’s landlord terminated his lease. But Schlossberg is far from the only person who has made this leap, and the example repeatedly set by Trump—characterizing Latin Americans as illegals, parasites, and animals who are altering the makeup of the country—is being replicated across the country. It’s being repeated by talking heads on television and by neighbours at the Goodwill store. It was repeated by a Montana border agent who detained two women, on the premise that two people speaking Spanish to each other is worthy of suspicion.

This is the rhetoric that smooths the social landscape into a slippery slope. After all, Schlossberg wasn’t threatening the Spanish-speakers with a visit from ICE because he had a concern about gang violence. The border patrol agent in Montana didn’t mention anything about MS-13 when he detained two women for speaking Spanish within his earshot. And the Trump administration is not cracking down on gang violence when its Attorney General proposes separating children from their families at the border, and warehousing them in military bases. When average Americans act out the way Aaron Schlossberg did, they are taking a cue from the higher-ups. They believe they are anointed by the state to police how and when nonwhite people speak in their mother tongue.

This is how dehumanizing language and racialized discrimination creeps down from the President’s lips to the ears of average Americans and residents who do not benefit from the cover of whiteness. It begins with the flimsy cover of describing the worst members of a given population. Before long, bigots adapt that definition and apply it to general members of that population, in order to justify their threats of persecution and violence.

In historical context, the cry of “animals” to describe MS-13 becomes little more than a stand-in for the hatred some Americans feel towards people that, 50 or 60 years ago, they could have evicted with the help of a mob. The white supremacist’s playbook has always made for thin reading—and in the case of Trump’s comments, we’ve been over this chapter too many times to be fooled by it.