Opinion: Anti-Semitism propelled Robert Bowers, who was arrested for allegedly killing 11 in a Pittsburgh synagogue. But there was something more familiar, too 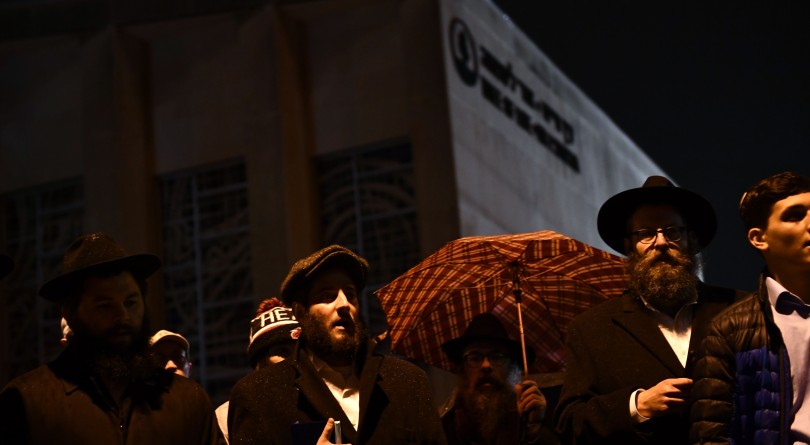 People gather outside the Tree of Life Synagogue after a shooting there left 11 people dead in the Squirrel Hill neighbourhood of Pittsburgh on October 27, 2018. (Brendan Smialowski / AFP/Getty Images)

When Robert Bowers entered Pittsburgh’s Tree of Life synagogue on Oct. 27 and massacred 11 people who were honouring the Sabbath, he was motivated by extreme hatred and fear of Jews. But it was not the only thing that inspired him: His final posts on Gab—a social-media platform like Twitter and Facebook, but with more tolerance for free-flowing white nationalism—suggest that a hatred and fear of refugees propelled his violence, too. He posted about a Jewish agency that assists refugees, and warned they were bringing in “hostile invaders” to “kill our people.” And in the days before the shootings, he posted and reposted repeatedly about the migrant caravan from Honduras heading through Mexico toward the United States, and which Donald Trump has claimed is an “assault on our country.”

Anti-Semitic hate crimes have recently risen in this grim era, rearing its ugly head last year at Charlottesville’s white-supremacy rally and in ads vilifying billionaire George Soros. But it edges up even as antagonistic sentiment explodes against Latino immigrants in the United States, fomented by its commander-in-chief, and the hostility toward Muslims and refugees in the U.S. and Canada, both in rhetoric and policy. So the twin impulses behind Bowers’s crimes are abhorrent, but they may not be surprising: Anti-Semitism and North America’s more contemporary anti-newcomer sentiments are, at their coarsest roots, paranoid bigotries borne of some of the same prejudices.

READ MORE: A rabbi on standing up to anti-Semitism, after Charlottesville

For centuries, wariness of Jews focused on their “otherness”—their cultural habits different to those of Christians, clannishness and slowness or failure to integrate with the rest of society. The latter is a perennial trope among those wary of newcomers, most recently in now-former Conservative MP Maxime Bernier’s remarks about the ghettoization of minorities in a multicultural Canada.

Today’s fear of terrorism among Muslims and the Trump administration’s constant stressing of Latino crime and gangs in its approach to immigrant policy finds a parallel with the “blood libel” myth of Jewish ritual using Christians’ blood, as well as in the case of Leo Frank, a Jewish factory manager in Atlanta dubiously convicted of murdering a young female employee in 1913 whose case sparked the revival of the Ku Klux Klan, and his own lynching.

And as some of the harshest anti-immigrant U.S. voices warn of a furtive Islamic infiltration of the West in order to subvert and dominate—sometimes even drawing the President’s attention—we should remember that, in the early 20th century, insidious claims that Jews secretly plotted world domination fostered vile distrust on this side of the Atlantic, as well as genocide in Europe.

MORE: The KKK has a history in Canada. And it can return.

Indeed, in one of history’s greatest shames, Jews were the unwanted refugees of 80 years ago. Popular mood ran against a 1939 Congressional bill to bring 20,000 German Jewish children to the United States; the wife of the U.S. commissioner of immigration at the time argued that “20,000 charming children would all too soon grow up into 20,000 ugly adults.” Canada’s wartime prime minister Mackenzie King, who refused Jewish refugees here, adopted the views of  his openly anti-Semitic director of immigration, Frederick Charles Blair, whose office allowed fewer than 5,000 Jews into Canada.

Bowers’s hatred of Jews and others—on full display here and here, if you wish to try stomaching it—runs the gamut of old-style fears the Jews will despoil, destabilize and dehumanize society, up to and including the blood libel. These are dangerous relics from a different century; the forums to commiserate over rabidly anti-Semitic views are vastly removed from the North American mainstream. But his reported fear extended to predictions that refugees and Central American migrants would help erode and destroy American society—and the edge of his paranoia remains disturbingly common, affecting many vulnerable communities, and it’s now being espoused from the highest seats of power.