Are we really okay with Jason Kenney?

Jen Gerson: The UCP is supposed to win back this conservative province. But it's becoming clear that more and more Albertans are uneasy with what the party represents. 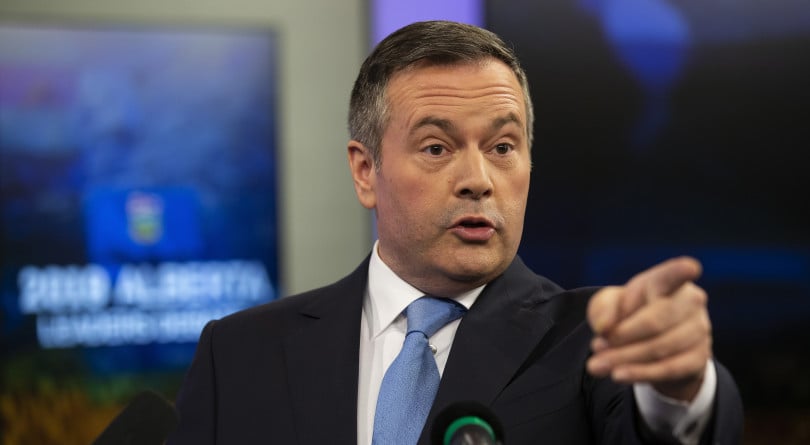 Kenney speaks to the media after the 2019 Alberta Leaders Debate in Edmonton, on April 4, 2019. (Codie McLachlan/CP)

Since the writ has dropped, I have been slow to write about what has become a clear and malignant “bozo eruption” problem within the United Conservative Party. Other media outlets and columnists are already offering reporting and insight into the numerous examples of UCP candidates who have publicly offered dodgy, racist, or homophobic comments in various fora. UCP leader Jason Kenney appears to have promptly dropped every problematic candidate and nominee to date.

But Jason Kenney’s disastrous interview with radio talk show host Charles Adler on Wednesday night was uncomfortable, and even disturbing to listen to. It warrants dissection.

Kenney’s vow to dump bozos seemed to last only until he found a bozo he couldn’t eject after the deadline to replace him had passed; the leader has decided to stand behind Mark Smith after an extensive sermon was released in which he questioned whether homosexual love was “good love,” obliquely comparing it to pedophilia.

That was quickly followed by a leak of a rambling, borderline incoherent memo Smith wrote that suggested that Christian schools should able to fire homosexual teachers for doctrinal reasons. The memo wasn’t written in the ’90s, but rather in 2015, fully 17 years after the Supreme Court ruled the opposite in the Vriend decision.

Smith was the UCP’s education critic, and would have been a lock for Education minister.

That was clearly enough for Charles Adler, a conservative talk show radio host, who ground Kenney to a mote during a half-hour long interview on Wednesday night, right before Thursday’s lacklustre provincial leaders’ debate. Kenney—who claimed he had not heard the audiotape of Smith’s sermons until attending the show—came across as unprepared and evasive.

READ MORE: Rachel Notley fought like hell for Alberta, but the province isn’t about to thank her.

It’s the sort of fire burning interview that only someone like Adler—who has a long history and rapport with Kenney—could have done. It’s not easy to dismiss Adler as an urban elite. Rather, he was a peer holding a friend to account.

And boy-oh, did he ever.

Three times, Adler asked Kenney to offer a genuine apology for his role in overturning an ordinance that would have allowed gay partners to visit each other in hospice during the height of the AIDS epidemic in San Francisco in the ’80s. Kenney declined, granting only that there were many things he regretted as a young man.

Kenney highlighted the fact that the UCP is putting forward the most diverse slate of candidates of any party; Adler noted that that diversity didn’t seem to extend to sexual diversity. Not a single LGBTQ candidate made it past the nomination process.

Kenney went on to defend his party’s decision to reinstate the Education Act, thus rolling back some of the protections for Gay Straight Alliances included in Bill 24. He went on to note the court case against Bill 24, and said the bill puts parents in an adversarial role.

Adler steamrollered right over these points, asking why so many people who bash gays, women and Muslims were attracted to the UCP. “Why are the knuckle draggers attracted to your party.”

Finally, Adler asked Kenney to confirm that Mark Smith would not become education minister. Kenney refused until the third ask. It was a riveting bit of radio.

Adler was tough, but his questions weren’t unfair. Yet when Kenney responded, what I heard was “Charles, we all know I have to say the right thing to the left-wing media. Wink.”

The opposition to Bill 24 is complicated, and worth unpacking. Kenney—along with other critics of the Act to Support Gay Straight Alliances—have framed their opposition under the rubric of religious freedom and parental choice.

The main concern, they contend, is that the blanket prohibition against informing parents of their kids’ extra-curricular activities: “violates the fundamental right of parents to be informed concerning their children’s education.” Kenney himself has defended the UCP policy by noting that professional, trusted, principals and teachers would inform parents only in cases where the child’s health could be at risk.

Several times, he has cited evidence used in an active court case opposing Bill 24. One, including a claim that an unnamed child was taken from an unnamed school to an unnamed conference by an unnamed facilitator. Cue the ominous music.

Kenney has cited another, from unnamed parents who claimed that their autistic daughter fell into a “dark place” after joining a GSA. Essentially, she was pushed to transition into a male.

Had the parents not been informed about their daughter’s involvement, they would not have been able to obtain help for underlying mental health and medical issues, including body dysmorphia.

READ MORE: What a ‘kamikaze’ mission reveals about Jason Kenney

This case, while undoubtedly complicated and difficult for the parents and their daughter, bears all the hallmarks of the narrative fomenting about GSAs—namely, that they’re sex clubs run by secretive teachers handing out explicit material trying to “corrupt” vulnerable young people into becoming gay or transgender. These kinds of stories and conspiracies about statist brainwashing have been rampant in conservative circles for years.

While the rhetoric around “parental rights” may sound appealing, this argument doesn’t bear the most basic scrutiny. There is nothing in Bill 24 that allows teachers or facilitators to take children off campus without parental consent. There is nothing—absolutely nothing—in Bill 24 that prevents teachers or principals from informing parents if they fear harm to a child.

The bill merely prevents notifying parents that their child has joined this specific club, and given the level of paranoia and misinformation currently circulating about GSAs—and the many very real harms that gay and transgender teens face when they are outed to unsupportive parents—that prohibition is reasonable.

By giving private and religious schools the right to notify parents of their kids’ involvement, uncomfortable administrators maintain a powerful tool to dissuade children from ever creating or joining a GSA. That’s the point.

Also notable is the organization currently challenging Bill 24, the Justice Centre for Constitutional Freedoms (JCCF). The president of the JCCF is John Carpay who landed in the limelight last year when he told a crowd at a conference held by Rebel Media: “How do we defeat today’s totalitarianism? You’ve got to think about the common characteristics. It doesn’t matter whether it’s a hammer and sickle for communism, or whether it’s the swastika for Nazi Germany or whether it’s a rainbow flag, the underlying thing is a hostility to individual freedoms.”

Carpay is still a member of the UCP.

As a parent, I understand how unsettling the prospect of one’s child joining a club, secret by law, must seem. I don’t think all of the concerns with Bill 24 are rooted in bigotry: most parents are just genuinely concern about what is in the best interests of their kids.

But the opposition to Bill 24 isn’t merely about injecting nuance into a complicated case of competing rights between parents, schools, religions and kids; that’s just the way the argument is being presented for mainstream consumption. The agenda, in this case, isn’t even well hidden. Wink.

I am at a loss to understand why Kenney would be so passionate about parental rights. When confronted with these issues, Kenney continues to try to re-frame the argument: The NDP is just getting desperate, right? No one cares about this stuff but a bunch of caffeine-addled “progressives” on Twitter.

It’s like he’s perpetually stuck in 11th Grade debate club mode, thinking he can win the premiership on points. But no one questions Jason Kenney’s intelligence.

He’s off putting because he can’t seem to project himself into the emotional space of other people—the gay men his activism harmed in San Francisco in the ’80s. The gay children who might find refuge in a school club. The fellow Albertans who are becoming deeply uncomfortable about what a UCP win will say about this province to the rest of the country.

Kenney can boast a long career as a politician, and he’s won a lot of victories. It should also be noted that as federal immigration minister, he was a vocal advocate of supporting gay and lesbian refugees escaping hostile regimes like Iran.

His performance at Thursday’s debate was perfectly credible; he did not make any of the glaring errors he exposed during the Adler interview. Ironically, I thought his strongest positions came at the end, when he talked about the UCP’s education platform.

But he’s now asking for a very different kind of job than the posts he’s held before; one in which he is going to be able to have a significant effect on some of the most intimate details of Albertans’ lives. This isn’t an academic exercise.

I see very little ideological diversity behind Kenney’s campaign. I see virtually no women in positions of influence; no Red Tories, no gay people, and no skeptics. This is a campaign staffed with people who seem very convinced that all of this bozo eruption stuff is just a left-wing media conspiracy. That Jason Kenney cannot lose. That Alberta is a Conservative province full of Conservative people who are winking in return.

I am not convinced that Albertans are winking back on this stuff. People have a need to confess themselves, and columnists and priests are often the recipient of a lot of unsolicited insight into the true nature of people’s feelings. It’s a weird gig.

Over the past few weeks, my inbox and private messages have been inundated with notes from conservatives—staunch, genuine conservatives—who admit to deep misgivings about the current ethical and moral direction of the UCP.

Alberta is so angry, so disappointed in the state of the economy, and so wrapped up in its own self-image as a Conservative province that those feelings aren’t often expressed in public or, I suspect, in poll numbers. Identity is a deeply rooted thing, and these emotions are complicated.

I have only this to say to such people: I don’t believe you are in the minority. I don’t think you’re in the minority even among fellow conservatives. And nothing is going to change as long as the people in charge of the UCP remain convinced that they—and they alone—have the bead on the true Alberta.