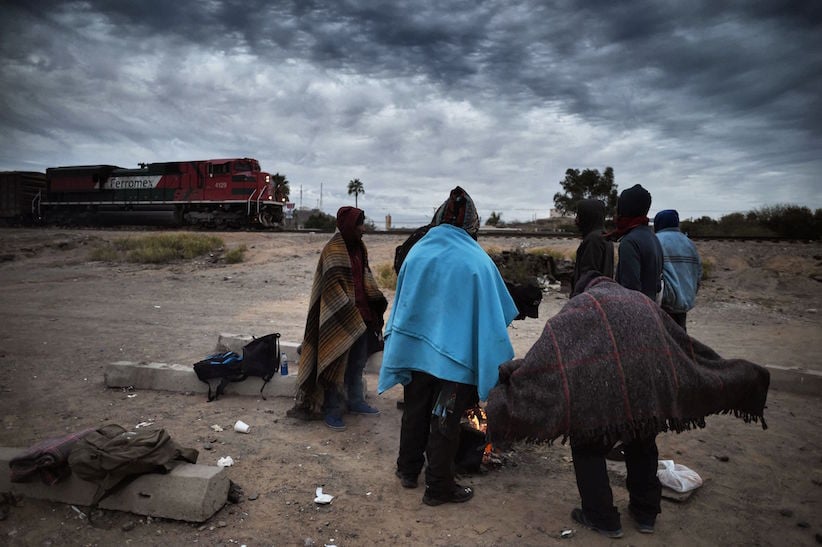 Honduran migrants warm themselves next to a campfire near the train tracks in the community of Caborca in Sonora state, Mexico, on January 13, 2017. Hundreds of Central American and Mexican migrants attempt to cross the US border daily. (Alfredo Estrella/AFP/Getty Images)

Jean-Nicolas Beuze is the representative in Canada of UNHCR, the United Nations refugee agency.

A few weeks ago, I was in Honduras, attending a conference at which Central American countries adopted key measures to provide assistance to these refugees. Outside the conference sessions, I spent some time with children and women who had fled extreme violence at the hands of criminal gangs and attempted to reach safety, primarily in Mexico and the United States.

What I heard from them were shocking accounts of appalling violence, particularly sexual violence. Javier, aged 11, had been forced by a gang to murder the alleged killers of his father; and Charleston, aged 12, had already survived multiple episodes of gang rape. The flat, emotionless way that they spoke of these terrible experiences underscored the sad fact that for them, such dehumanizing violence had become the norm. Their only hope of a way out has been to, quite literally, run as far away as they can.

At the conference, countries from the region pledged their firm commitment to end violence by these criminal gangs. But interestingly, aware that vulnerable women and children are still on the road, they also committed to strengthen protection services for these victims, during their journey as well as upon arrival in the countries where they seek asylum. Measures proposed ranged from establishing safe shelters, to the delivery of specialized medical and psychological support, to easing access to schools and communities—all of it very much needed.

But listening to these earnest promises of action, I could not help feeling a sense of dread that their good intentions would not materialize without adequate financial support. With crises from the Rohingya refugees in Bangladesh to South Sudan dominating the headlines, I knew it would be difficult for us to respond to the call for help from these Central American nations. This is why these countries and UNHCR, the UN Refugee Agency are looking to Canada for help.

With 215,000 refugees in Central America—a tenfold increase in the last five years—it always surprises me that the situation is not getting more attention in Canada. That’s especially true given that this silent crisis is unfolding not too far from its border, and in a country where Canadian snowbirds go to escape the harsh winter here: Mexico.

That lack of attention shows in how much aid we’ve received. In comparison to other crises, we were actually not asking much: $37 million in 2017. But as we close the year, only 19 per cent of that sum has been received. Additional Canadian aid would boost our interventions where they’re needed most: keeping safe shelters open for children and adolescents like the ones I met in Honduras; maintaining access to the first safe space for LGBTQ2 in Guatemala; and providing legal aid to unaccompanied children detained and claiming asylum in Mexico. The geographical proximity of this crisis warrants an extra attention by Canada as the rest of the world turns their eyes to crises closer to their shores. Furthermore, Canada has embarked on a series of initiatives that put women and girls at the centre of its priorities, not least through its Feminist International Aid Policy launched this summer by Minister Marie-Claude Bibeau. Its response in Central America can thus demonstrate its leadership in caring for the most vulnerable like Charleston.

Protection is at the core of this crisis, as most these children and women are overwhelmingly fleeing violence, not poverty. Their access to efficient asylum procedures is key in providing them safety. Canada has actually already been helping in this respect by strengthening Mexico’s asylum system, which has seen a 311-per-cent increase of refugee claims since 2014, but other countries such as Guatemala, Panama, Costa Rica and Belize, which have also seen a surge in applications for refugee status, could also now benefit from Canadian assistance. Canada’s Immigration and Refugee Board has solid experience in assessing claims of survivors of sexual violence, including members of the LGBTQ2 community. Their members should now share their expertise so that asylum systems in Central America can equally assess who among those on the road need their protection as they will be unable to return home any time soon.

Canadians’ legendary welcoming attitude for the most vulnerable refugees can also be, once again, put to good use. UNHCR has identified more than 1,000 people who need to be relocated due to risks of reprisals from such acts as denouncing or refusing recruitment offers from gang leaders, or who are exposed to extreme vulnerabilities, such as rape survivors. The U.S. has already committed to providing a safe future for 600 of them in 2018. The only question is: How many will Canada take?

As the holiday season prompts us to reflect on charity, community, and safe refuge, Canadians should know that there are children and women on the run from violence here in the Americas. Here, so close to our homes, the worsening circumstances of desperate souls like Javier or Charleston are calling for Canada’s attention and a demonstration of our shared humanity.